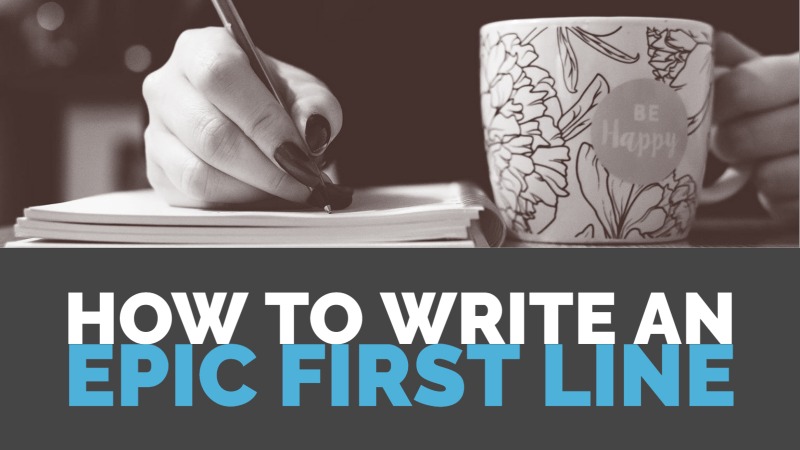 Do you want to write an epic first line for your story? In this post, we tell you how to do it – with examples.

In the previous post we spoke about how to write an epic first page. In this post I want to spend a bit more time talking about the first lines.

Read all the posts in this series here:

Your first line sets the tone for the scene and ultimately the book. You need to grab your reader’s attention and keep it. A first line should make the reader ask a question.

First lines rarely appear perfectly formed. They are written and rewritten several times. Below, you will see the first lines from the books we started discussing in the previous post. They are as varied as the stories themselves, but they all give us an inkling of what we can expect.

Opening line: ‘Everyone in Shaker Heights was talking about it that summer: how Isabelle, the last of the Richardson children, had finally gone around the bend and burned the house down.’

This story is all about keeping up appearances and the inevitable gossip one finds in such a community. The use of the word ‘everyone’ and the ambiguity of the speaker is typical of gossipy conversation. Needless to say, a teenage arsonist is just the kind of thing the gossip mill devours.

2. Where The Crawdads Sing

Opening line: ‘The morning burned so August-hot, the marsh’s moist breath hung the oaks and pines with fog.’

She starts with the weather. How often have you been told: don’t start with the weather? We follow the rules, until we have a concrete reason not to. The setting plays a huge part in the book. Kya’s voice and her relationship to the marsh is so integral to the story that this works.

3. Children Of Blood And Bone

Who hasn’t whispered those words? For a second you were standing on the playground again waiting for your name to be called. We can all relate. It’s when we realise that she wants to be picked to fight that we become intrigued.

Opening line: ‘When Margery was ten, she fell in love with a beetle.’

This is so perfectly proper and British, which suits the story and Margery to the tee. It also leaves no doubt about her love for the beetle. The oddness of it introduces her beautifully.

Opening line: ‘Alicia Berenson was thirty-three years old when she killed her husband.’

This line suits the clinical nature of the speaker. It is a statement. He does not leave any room for doubt, but we immediately want to know what happened.

Now, how do you write an epic first line?

You can also do this on a computer but writing by hand broadens the creative scope of the exercise and delivers better results.

Borrow the structure of existing lines. Find the line you like the most and that suits your story or genre and rewrite it. Don’t copy. That sucks, but use it as a base. I made rough templates using the stories above. Again, don’t copy anyone’s work. This is a starting point, make yours as different as possible. Think of it as a master plot for first lines.

Look at your favourite stories. How do they start?

These are all clues that will help you write your own first line. Why do you think the author chose to emphasise that part of the story?

Further reading: Here are some more great opening lines to inspire you.