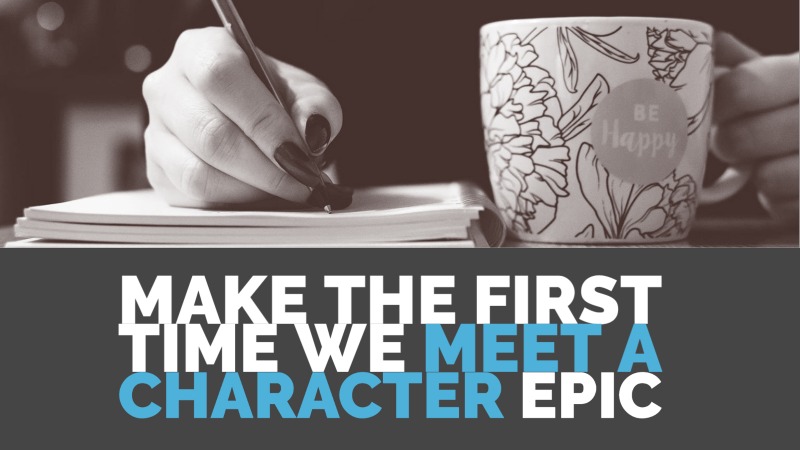 Do you want the first time you meet a character to be epic? In this post, we tell you how to do it – with examples.

In the last few posts, I’ve been discussing all the firsts. The first line, the first page, and the first scene.

Previous posts in this series:

In this post, I want to discuss the first time we meet a character. First impressions are a big deal when we meet someone and a book is no different. We do try to be kind. We try not to judge, but we make up our minds about someone usually in the first few seconds. (Read Blink by Malcolm Gladwell if you need more convincing.)

As writers, we need to arm our readers with the right information about our characters. There will still be room for mystery and growth, but we need to orientate the reader and give them an idea of who they should be rooting for.

Please go back to the previous posts to catch up and remind yourself what needs to be covered. Look at how hard your first page has to work.

How To Make The First Time We Meet A Character Epic

Characters are shown through:

Look at these examples in the books we’ve been discussing to see how some writers use these techniques.

Viewpoint Character: Narrator, unknown, in the style of the town gossip.

I love how she includes and foreshadows all the important characters and introduces the conflict without any giving anything away.

2. Where The Crawdads Sing by Delia Owens

In the next section, notice how much description is given of the mother and how little is given of the father, yet you know everything you need to know. Even though, the mother leaves and isn’t ‘on the page’ she is Kya’s main motivation in the first part of the book. Most of what she does is to prepare for her mother’s return.

‘And then, Kya, only six at the time, heard the screen door slap. Standing on the stool, she stopped scrubbing grits from the pot and lowered it into the basin of worn-out suds.’

3. Children Of Blood And Bone by Tomi Adeyemi

I didn’t include Amari and Inan’s chapters here, but when you do read the book take note of how much the first few lines in those chapters tell us about who they are and about the environment they find themselves in.

Most of the prominent characters are mentioned in the prologue. It is through a description of her mother that she introduces her family, the antagonist and gives us the backstory.

Characters: Mamma, Baba, Tzain, the soldiers and the King.

5. The Silent Patient by Alex Michaelides

The prologue is written as Alicia Berenson’s diary and Chapter 1 is an unknown narrator, who we learn is biased towards Alicia in his description. We do learn who he is as we go along.

To make the most of their character introductions the authors have employed at least one, but in the best examples, four or five of the techniques we mentioned above.

Tip: Get all the important characters on the page in the beginning of the story.

Don’t underestimate this introduction. It’ll do a lot of the ‘heavy lifting’ for you and set the tone for the book and the reader’s relationship with the character.

I hope this post on the first time we meet a character helps you when you’re writing your story.