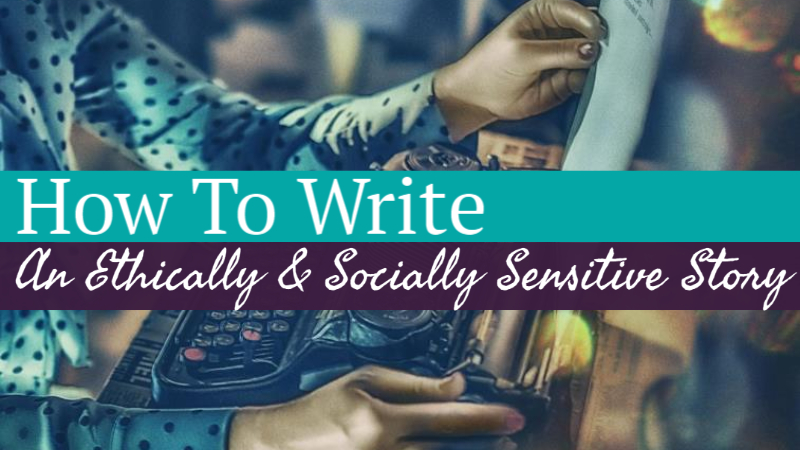 If you’re thinking about writing an ethically and socially sensitive story, find out how to do it well by reading this post.

Once upon a time, a novice writer was working enthusiastically on an idea that they considered being ‘one in a million’. While their fingers jabbed the worn-out keys of their computer, a familiar foe silently crept under the radar to throw a spanner in the works.

Sounds vaguely familiar? From writer’s block to self-doubt, there are many enemies to a writer’s productivity. The struggle to ward off mental demons from hampering your writing project is an occupational hazard.

But nothing makes me hit the abort button faster than the pressure to be politically correct while writing.

Let me elaborate with an example. Years ago, I wanted to write a psychological horror centred on schizophrenia. But the fear of dehumanising patients with schizophrenia, and sending out a wrong message about mental health issues, forced me to put it on the back burner.

Writing the way you want to write without offending the readers, while depicting things in a socially acceptable way, is similar to walking on a tightrope several hundred meters above the ground. Apart from worrying about being ethically sensitive without sacrificing the ebb and flow of the prose, a writer needs to justify that the tone and approach they employ is the best way to convey the story.

Before we discuss some scenarios in which a writer can feel stuck while tackling socially charged subjects, we must answer the following questions:

Why Should A Writer Care About Being Socially And Ethically Sensitive?

First things first, as a writer, you can write about whatever you want. Secondly, being ethically sensitive doesn’t mean that you can’t question the norms of the society that you consider unfair.

But what you write should not intentionally or unintentionally rub the well-informed reader the wrong way. While there will always be trolls on the internet ready to attack everything that you write, rational criticism can unmask problematic messaging in your writing.

A writer who peddles personal prejudices and half-truths by abandoning detailed research and an unbiased approach can never be true to the subject. [Suggested reading: What Is Author Intrusion?]

By being socially and ethically sensitive, you are ensuring that you are not misrepresenting facts or undermining someone’s struggles. It also helps you to humanise your characters and add depth to them.

If anything, being socially and ethically woke can make you a better writer.

But the problem with the pressure of being ethically sensitive is that it can sometimes come in the way of your storytelling. It boxes your imagination as a writer and makes you judge your creative writing from the lens of political correctness.

This marks a perfect segue to answer the second question – how much should a writer strive to be politically correct?

How Much Should A Writer Strive To Be Politically Correct?

While it is impossible to quantify such things, a writer can add or remove layers of political correctness depending on how confident and self-assured they feel about their story being ethically and socially accurate.

If you have taken all the aspects impacting a subject into account to form a balanced perspective, then you inadvertently end up being ethically sensitive. In this case, you no longer need to worry about political correctness.

For example, if you are portraying a character from a minority community as an antagonist, ensure that your readers understand the motives of your character and can empathise with them. If you are certain that you are not victimising a community or a section of the society, then your writing can finally break the shackles of guilt and self-doubt that accompanies political correctness.

You can then avoid the layers of political correctness from diluting the essence of your story. Do keep in mind that some readers might still find faults in your writing but it is not your job to appease everyone.

How To Write An Ethically & Socially Sensitive Story

Now let’s discuss a few socially controversial scenarios that present the dilemma of sacrificing creativity at the altar of political correctness.

As a writer, it is great that you want to tell stories from different cultures, races, and ethnicities. But a lot can go wrong if you aren’t careful while adopting elements from minority cultures.

The difference between cultural appreciation and cultural appropriation is that the former respects and celebrates cultural diversities while the latter diminishes the significance of cultural elements by using it for personal gain. A lot of writers, and artists in general, lack awareness about cultural appropriation. This can create a massive furore among members of a particular race or culture.

Example: Imagine your character is a serial killer who wears Red Indian face paint every time he sets out to kill someone. On paper, this sounds intriguing. It shrouds the killer’s identity and adds to the suspense of the story. But in reality, it is a case of cultural appropriation that disrespects the Native American tribe’s traditions as you are using it out of context just to amp up the intrigue factor.

Possible solution: Here are a few things you can do to get rid of cultural appropriation from your writing:

Writers love creating flawed characters. To be honest, it is no fun to write a character who is all things pure and divine. Sometimes, sexism and misogyny can be used as character traits to depict a person as unlikable or even pure evil. But the problem arises when readers can’t differentiate between a character’s flawed ideologies and an author’s thought process.

If you aren’t careful with how you express your character’s inherent sexism and patriarchy, they could be easily misunderstood as your personal opinions. Also, the way you depict female characters can tell a lot about your views on sexism and misogyny. If female characters are just props or caricatures thrown in only to move the plot ahead, it underlines the sexist nature of your writing.

Example: If you write a long paragraph glorifying a character’s masculinity, but don’t write even a sentence or two to condemn their patriarchal beliefs. This represents sexism in your writing. Another example is when you portray your character’s sexist ideologies in detail but they are let off easily without consequences in the end. This sends out a wrong message that the author supports sexism and misogyny.

Religion has always been a highly controversial topic in literature. Writers who want to critique a religious practice or share their opinions on a particular religion find it impossible to do so without offending people in the process.

Often, writers condemn a religion or two for their archaic world views and narrow-mindedness without acknowledging that similar problems do exist in other religions as well. Their criticism stems from uninformed biases based on what they read on the internet. Sometimes, it belittles the faith of people who willingly take part in these practices.

Example:  If you want to criticise the Catholic church for its stance on homosexuality or condemn Islamic practices that require women to wear a burqa or hijab, but conveniently forget that almost all religions oppress women and oppose homosexuality in one way or another, then it can cause outrage among people. When you are condemning a religious practice, you are also questioning the choices of the people who choose to follow these practices.

Before you resort to social commentary about certain aspects of religion, ask yourself:

If your answer to any of the questions is negative, then it is best to stick to well-researched facts about a particular religion. It is highly recommended that you conduct in-depth research and meticulous fact-checking, even when you are just stating some religious facts in your story.

Topics such as racism, sexuality, mental health, and racial and sexual stereotyping are a few other examples of socially and ethically charged scenarios where a writer could go wrong.

As we conclude, I just want to emphasise the general steps that a writer could take while dealing with ethically and socially sensitive topics:

To sum up, being socially and ethically sensitive is not a burden, but the responsibility of the writer to deliver their story respectfully. If your writing is ethical and your reasons for what and how you write are justified, then you don’t need to adorn your creativity in the garb of political correctness.