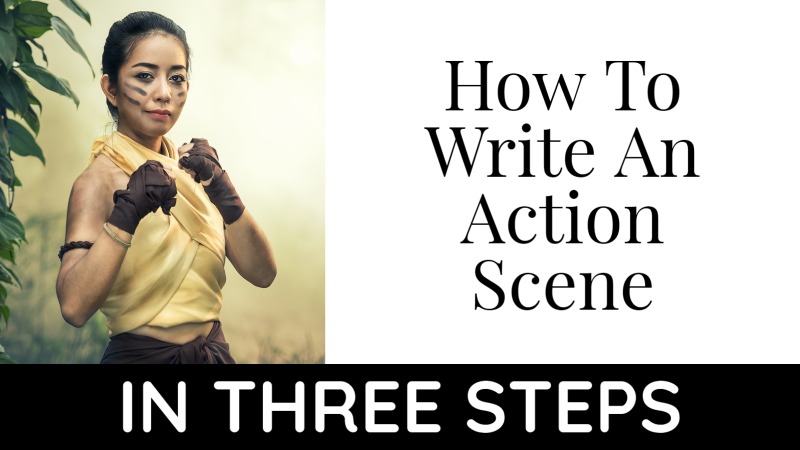 How To Write An Action Scene In 3 Steps

Are you writing about a battle or a physical fight? In this post, we tell you how to write an action scene in three steps.

Often, authors will imagine a grand battle and feel compelled to painstakingly write it down in boring detail.

They should not deal with strategies or plans. They are about actions, swift actions, that move the character forward and develop the plot.

[Tip: Read The Anatomy Of A Scene for a refresher on scene structure in fiction.]

How To Write An Action Scene In 3 Steps

So, what are the three most important parts of a good action scene?

Alternate between sentences of a few words and occasionally punctuate your scene with a long sentence to release tension. Pacing is important.

All details in an action must be clear to the reader and must be included for a reason.

90% of your sentences should be about movement.

If your action scene is not going anywhere, then it might as well be a conversation, At least that way the reader is less likely to skip over it.

There should always be dialogue in every part of your book, even the action scenes.

Even in stealth missions, you can have the characters talk. They can chat about their day, or give away information unwittingly.

If nothing else, your protagonist can have an inner monologue while they silently act.

It should be two or three pages at most.

Sure some authors get away with more, but they are the best of the best.

As I said before, readers are inclined to skip action heavy parts of a book. So, you need to keep the reader invested with breaks for dialogue or other respites from relentless action.

Think back to great action scenes in films and note how the director is always cutting to other people in battles.

Whenever there is too much condensed action for a prolonged period of time people start to lose interest.

Keep these three points in mind and you won’t bore your reader.

One last thing. Your reader will always do a better job of imagining the action then you can do writing it. So, why not leave it to them? Imply as much as you can. Build up the big fight and then ‘cut’ away so that they can fill in the gaps.

Have characters tell heroic tales describing it afterwards. Let people make boasts about what happened later in the story to make it seem more interesting.

A bit of misinformation inflating your protagonists’ reputations can be fun. Perhaps, they are even spreading these rumours themselves to make things easier on themselves?