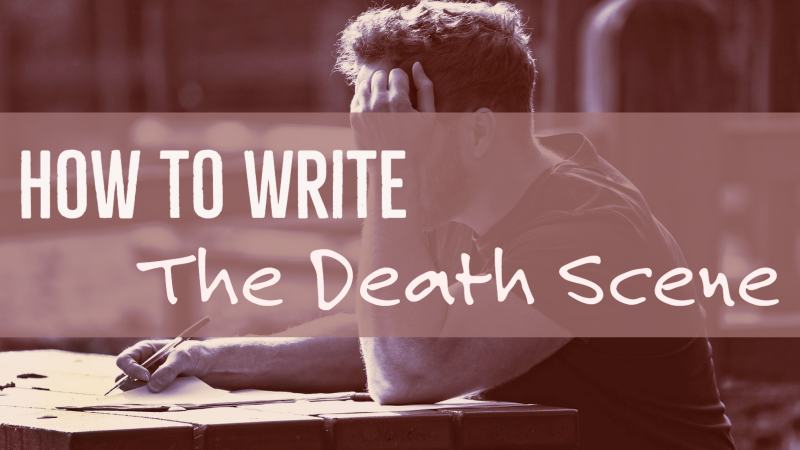 We’ve written about which characters should die and when to kill them in your stories. In this post, we discuss how to write the death scene.

Before you decide to kill characters, we suggest you read: Getting Away With Murder: A 5-Point Plan On How To Kill A Character. If you decide you’re still going ahead, then you need to know how to write the death scene.

How To Write The Death Scene

Death scenes in fiction can be many things. A character’s death can change the reader’s mind, alter the plot’s course, and stand out in the minds of readers for decades.

Writing death scenes are like pizza, or sex. When it’s good, it’s great. If it’s bad, people will remember it decades later (and for all the wrong reasons).

For writers, writing the final moments of a character can be either fun, or extremely challenging.

Here’s how to approach writing the death scene for more captivating scenes in your stories.

Congratulations, writer: you’ve just decided to whack, kill, eliminate, or execute one of your characters.

First, outline the impact it will have on your story’s plot. Are you sure, and what happens next? Proceed once you’ve answered these questions, or risk plot holes and editing regrets later.

Next, use a sheet of paper to consider the finer points. Method, motive, perpetrator, and evidence if this is important to your story.

Here’s how to write the moments of your character’s end.

Fictional deaths are spread throughout many movies, short stories, and books. Read as many of them as you can. Study these scenes with an analytical, editorial mind.

Pick fictional death scenes apart, and note where writers have paid attention to details. What words do they use, or not? Is their method accurate? Do they thank any experts for their research in the liner notes, for example?

For memorable death scenes, look at the death of Helen Burns in Jane Eyre (or Dumbledore’s dramatic demise in Harry Potter & The Deathly Hallows). Find your own favourites, and non-favourites from there.

After some fictional scene research, get into true crime stories and books. This gives the writer one of the most important things they can have: first person perspective.

Why do people kill? How do people die? What are the thoughts and circumstances surrounding various situations?

Deaths can be accidental, but deaths can also be on purpose.

For a start in true crime, consider writers like Truman Capote, Ann Rule, and Susan Orlean. Then look further, and read more. Remember that newspaper crime pages count here, too, and should be on your reading list.

If you want fiction to be accurate, you also have to study the intricacies of real life.

A death scene writer should choose a method of death, and then look to become as familiar with it as possible. Never be vague (or hurried) in your method research – and never!

Research can lead to strange places. Coroner’s reports, first-hand accounts from websites like Reddit, and a lot of medical research.

If something is unlikely or impossible, it’s a badly written death scene.

Be thorough at all times. This is how you research if you want to do it right.

You’ll notice that writers like Kathy Reichs, Stephen King, and Jean M. Auel (among thousands of others) often thank experts or institutions in their liner notes.

Writers can rely on experts to answer questions about the technicalities of fiction.

Common questions will be:

Construct your dying scene with experts, and it’s pretty hard to get things wrong.

When people describe real life death, emotions are triggered, and specific words will be used. It’s almost always more detailed than everyday speech. As a writer, use this.

Now get some synonym dictionaries ready.

6. The Theory Of Relativity (To Other Scenes)

A death scene is easy to get excited about, and easy for a writer to blow out of proportion. Don’t dress it in too much flowery language. Don’t turn it into an epic.

Good death scenes are statistically relative to the rest of your scenes. Measure it (1) by word count, (2) by readability statistics. Then measure another scene from your book.

Is it too long, too short, or too far from the average readability?

Edit. It’s going to seem out of place.

7. A Place For Grotesque, Or Not

Magazines, literary journals, and publishers can be put off by graphic or gruesome death scenes. Many will mention it in their guidelines. Detailed doesn’t mean gruesome, and doesn’t have to.

Studying death scenes (as step one!) should teach you where this line lies for your story and market.

One of the worst death scene mistakes writers make is killing the wrong character at the wrong time. Outlining is recommended, and this way you’ll know what this action does to the rest of your plot.

A character’s death can be a massive impact on where your story goes. Figure out if you’re happy with it before signing their death warrant.

If it doesn’t seem right, move your death scene to somewhere else – or just kill another character instead.

Expert advice isn’t only for writing the scene. It’s a good idea to return to your expert sources (and resources) once the scene has been written.

Examine your death scene postmorten. Ask the same experts if you, the writer, managed to get it right. Reliable beta readers can also be useful (and paid beta reading is gaining more traction for writers).

Don’t stress, just go back to your research, or do some necessary editing.

Here’s a glance at three fatal mistakes writers make when writing death. Of course, try not to make them yourself (and notice when other writers do).

Medical mistakes are things that are not physically or medically possible. For example, a victim who has been stabbed in the lung would struggle to talk – but yet, I’ve read hundreds of bad death scenes with long conversations.

If you aren’t sure, search the question online, or ask a medical professional who has dealt with it.

Methodical mistakes are errors in the way your method works. For example, the firing rate of a specific firearm, or the length of a Bowie-knife. Do you know?

Experience can often be legally gained in real life. For example, visit a shooting range, or call a gun expert. Yes, readers will know if you’ve never fired a gun, but tried to write about one.

Procedural mistakes are things that take place after death. The actions of first responders like the police, or like doctors and first-aid professionals. It can even be expanded to the courtroom.

Again, do your research, or ask an experienced expert. These are the best possible ways.

Which death scenes from fiction stand out for being exceptionally good, or terribly bad? What have you learned writing them, and what weird research have you had to take on for it?

If you enjoyed this, read his other posts: