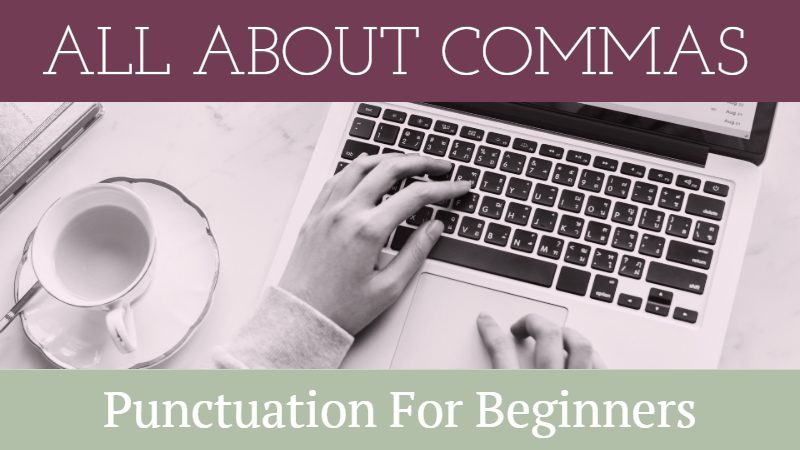 Punctuation For Beginners: All About Commas

Welcome to the third post in the series: Punctuation For Beginners. We’ve discussed what punctuation is and why we need it. Last week, I wrote about full stops. In today’s post, we discuss commas.

(Sign up for our newsletter to get our Daily Writing Links, and you won’t miss out on any of our posts.)

These are the most common punctuation marks:

Today, I will be writing about The Comma.

A comma is a punctuation mark (,)

‘A comma marks a slight break between different parts of a sentence. Used properly, commas make the meaning of sentences clear by grouping and separating words, phrases, and clauses.’ (via Oxford Dictionaries)

Commas separate words and phrases in a list. We use them to separate three or more items in a series.

When the last comma in a series is placed before ‘and’ or ‘or’, it is known as the serial comma or Oxford Comma. Not all writers use this. It often depends on which style guide you follow. However, using it generally helps you to avoid misunderstandings.

Example: My favourite sandwiches are chicken, bacon and ham and cheese. (via)

If you omit the final comma in this sentence, the sandwiches could be either bacon and ham sandwiches, or ham and cheese sandwiches. Add an Oxford comma to make it clear which one you mean.

‘There are people who embrace the Oxford comma and those who don’t, and I’ll just say this: never get between these people when drink has been taken.’ ~Lynne Truss, Eats, Shoots & Leaves: The Zero Tolerance Approach to Punctuation

Commas indicate where one phrase or clause ends and another begins.

a) Use them where two independent clauses (sentences that are complete, and make sense on their own) are joined by conjunctions like ‘and’, ‘or’, and ‘but’.

Example: I walked to the shops, and I took the bus home.

Tip: Avoid using a comma between two main clauses, especially if they are long. If you omit the conjunction, it is known as the comma splice error. Rather use a full stop.

Example: Writers, who write every day, create a daily habit.

c)  Use them when you start a sentence with a subordinate or dependent clause. This type of clause does not express a complete thought. It is not a complete sentence.

Example: After we changed the time of the meeting, we left the office.

d)  Use them after introductory words or phrases.

Example: Once again, I was congratulated by my manager.

Use them to quote somebody’s words exactly as they were said.

4. To Mark Off Certain Parts Of A Sentence

Use them to add information that could be inserted in brackets or between dashes. This information is not essential for the main sentence to make sense.

Example: Her latest book, The Art of Memoir, was a bestseller.

Use them before and after words like ‘however’ and ‘nevertheless’.

Example: However, she was still late for the bus.

Tip. Don’t use a comma after however when it means ‘in whatever way’.

Example: However hard she tried, she did not make the cut.

7. To Distinguish A Name From The Rest Of The Sentence

If you are addressing a person directly, use commas to set off their titles, names, or terms of endearment.

Tell me, Holly, why were you early today?
Yes, my darling, I will.
Good morning, General.

These are the most common rules for using the comma. For a more detailed list, I suggest you read Comma Rules