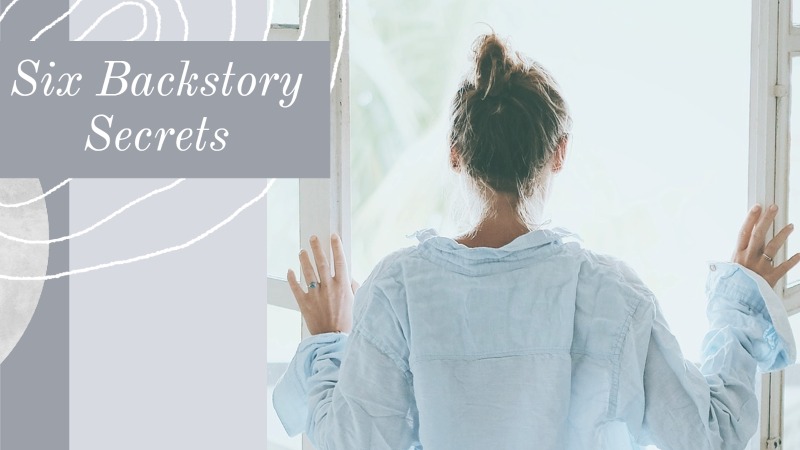 Here are six backstory secrets to help you with your current or next writing project.

How To Write Character Backgrounds That Serve Your Story

Do You Want To Build A Brilliant Backstory?

Anything that happened to a character before the story starts is backstory. Even if seldom mentioned, it important to know a character’s past.

What significant personal, political and historical events shaped them?

Example: As a child Ben survived a concentration camp during the Boer War. His family still has enmity towards the British.

Why Do We Need Backstory In A Book Or Movie?

A character without a past simply isn’t plausible. The audience need to know enough of a character’s background for this fictional being to come across as authentic and credible.

More important, it allows you to create conflict, emotion, and tension when the story starts.

Example: As a young farmer Ben falls in love with Anne, a beautiful British nurse. His family will never accept the relationship.

As you can see, the events in the character’s backstory are the catalyst for a powerful historical romance.

Read Why Backstory Should Be The Scar Tissue Of Your Book

Here are six backstory secrets to help you with your current or next writing project.

Before you start a draft of your script or novel, write short backstories for the main characters.

Don’t make these too detailed, because you want to give the character and story room to grow or change. Don’t make backstory too vague, either. You need just enough to get started.

If you can’t get it right, don’t panic. Often a character will reveal themselves to you as you write the first draft.

Keep a notebook ready to jot down these flashes of insight.

In a novel I’m working on, I was struggling to understand why my antagonist hadn’t formed healthy romantic relationships growing up. Then it struck me – he’d been an obese teenager and this had made him ‘invisible’ to the other sex.

You’re free to change or amend a character’s backstory. Just as your story changes from draft to draft, so does the backstory.

Too often writers are constrained by rigid thinking. Your characters are fictional and there to serve your plot. As the writer, you’re in control at all times.

Recently, I found myself a victim of this thinking. In my original backstory, a character had grown up near the coast. He and his band mates were local celebrities in beachfront bars.

As the story developed, I realised that a busy, urban background would better suit his character. However, I resisted making this change for a long time.

Why not try this characterisation exercise from Amanda Patterson?

A common mistake is to create lengthy, elaborate and unnecessary backstories for a character – covering every event from birth onwards.

The truth is that you only need to focus on background events that support the kind of story you’re telling.

In a romance, focus on past relationships (parents, former lovers and spouses etc.). You need to know how hurts, tragedies, and neglect shaped a character’s romantic ideals or perceptions of relationships.

In a drama, yes, the character studies will be far more detailed and psychologically penetrating. However, for a straightforward story, you don’t need to create elaborate backstories.

Read Is Your Backstory A Threat To Your Book?

Most of us have pretty predictable and undramatic lives. In fiction, your character must have some ‘stand-out’ event in the past to make them interesting.

It can be subtle or bizarre, a half-buried memory or a major driving force of their personality – but it must something that shows a unique facet of their character.

What makes their past extraordinary?

Example: Flynn is the hero of an action-adventure series. In a flashback, we learn that when he was 15, the family yacht was taken hostage by pirates. Quick thinking and athletic, Flynn managed to silently dive underwater and rig a crude bomb on the pirates’ ship – a diversion that helped his family escape.

This backstory is important as it helps us understand what compelled him to follow a life of adventure and danger.

The timeline is a useful tool for any writer when it comes to backstory. It allows you to track characters’ backgrounds.

Create this document as a chart, spreadsheet, or something visual that you can refer to at a glance. Use coloured pens or photographs to make certain elements stands out.

Place each main character’s journey alongside each other. This helps you see the characters as part of a larger story rather than isolated and individual histories. At a glance, you can see what changes to make.

If necessary, create a concurrent political and historical timeline. Example: You wouldn’t have your characters enjoying a peaceful beach holiday in Thailand during the 2004 holiday season tsunami.

As you finalise your story, focus on key moments in a character’s biography in a way that serves your final draft.

This key moment can be focused on plot. Example: In a political thriller, you may wish to focus on the events of a single, crucial day – your character was a junior political reporter in London. He was following up on anonymous tip about a corrupt minister in the Foreign Office. That minister is now Prime Minister and your hero has kept many of his secrets.

In other instances, the defining moment can be more psychological. Example: Your main character struggles with issues of abandonment.

In the backstory, focus on the car accident that claimed his parents when he was a boy. You can add layers to the incident – Mom and Dad were fighting about him when Dad lost control of the car, etc.

Backstory underpins plot, character, and setting. It is worth spending some time forming a solid foundation for the main characters. Use these backstory secrets.