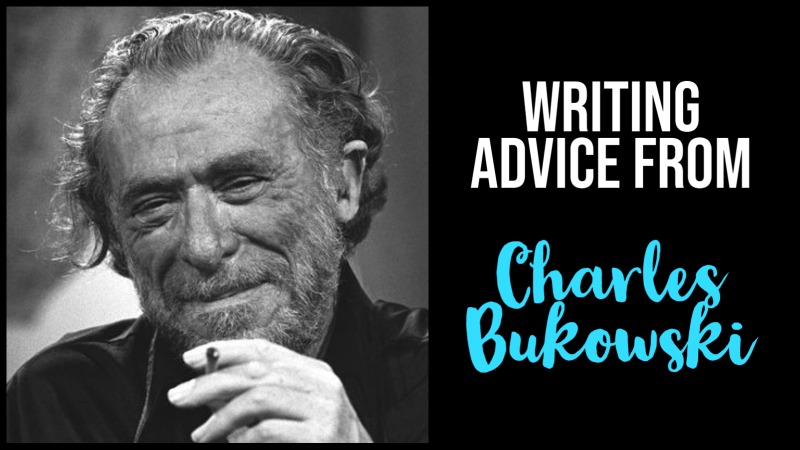 In this post, we share six bits of writing advice from Charles Bukowski, the American novelist, short story writer, and poet.

Charles Bukowski’s writing style is almost impossible to describe without the use of creative language. Gritty, controversial, and rude are just three words you could use to tell people what Bukowski’s work is like. Excellent, revealing, and captivating are three more.

Learning from Bukowski is like taking writing classes from a beloved and wise (but very inebriated) professor. He is sometimes blunt, but always true.

Who Was Charles Bukowski?

Henry Charles Bukowski (born 16 August 1920, died 9 March 1994) was a German-American writer, poet, and icon of the Beat Generation. Born in Germany, Bukowski’s family relocated to Baltimore in 1923, and later settled in Los Angeles.

His first published essay was Aftermath Of A Lengthy Rejection Slip. Bukowski would keep on writing from the first moment he felt the rush of being paid for it.

He began writing his column Notes of a Dirty Old Man in 1967. It was thanks to this that the FBI kept tabs on Bukowski along with other counterculture icons of the time.

Bukowski wrote throughout his life. He left behind enough unpublished writing, essays, and letters to fill several more volumes that were published far after his death.

‘My style is very simple and direct, just like your photography, it records what occurs, it doesn’t make any speeches. It says what it says, and it’s all there is to it. My poems are a little more emotional, I let myself go a little more. But in prose I’m pretty straight.’ ~Interview with Elisa Leonelli, 1981

Bukowski drew attention to the interviewer’s photography during this rare interview, and likened his own writing to snapshots. Good writing uses plain language to get a point across, instead of losing the message in fancy language. Never embellish or over describe.

‘I write as a function. Without it I would fall ill and die. It’s as much a part of one as the liver or intestine, and just about as glamorous.’ ~ Portions from a Wine-Stained Notebook

Writing should feel like second nature, and eventually will if you’ve practiced it enough. If you consider the act of writing as essential as breathing, it’s never going to feel like work. What else would writers do with their lives if they didn’t write?

‘There’s nothing to stop a man from writing unless that man stops himself. If a man truly desires to write, then he will. Rejection and ridicule will only strengthen him.’ ~The Captain is Out to Lunch

Bukowski would spent the majority of his life denying the existence of writer’s block, and using his own time to write things. He was convinced that blocks were self-imposed obstacles for which he had no patience. Write as much as you can, and develop a thick skin.

If you feel like you cannot write, it is imperative to push through it. Use writing prompts, write fan-fiction, or author some letters. It’s all writing. It all helps.

‘Writing isn’t work at all… And when people tell me how painful it is to write, I don’t understand it because it’s just like rolling down the mountain you know. It’s freeing. It’s enjoyable. It’s a gift and you get paid for what you want to do.’ ~Sunlight Here I Am: Interviews and Encounters

Writing is an important art that’s as ancient as our ability to imagine, document, and think. If you want to be a writer, never treat your craft like just another chore!

Bukowski enjoyed writing. He made no secret of the fact that getting paid for his writing was an even better kick.

Always remember that being able to write is always a very special thing. Even for Charles Bukowski, the thrill of seeing his by-line never wore off.

Always be this excited when you write.

‘Not writing is not good, but trying to write when you can’t is worse.’ ~Upon This Time from The Last Night of the Earth Poems

Writers, editors, and friends can tell when a writer is forcing things – or trying too hard to make their words fit. Writing is important, but one should always remember that life is too.

It’s important for both your physical and mental health as a writer.

‘If you’re going to try, go all the way. Otherwise, don’t even start. This could mean losing girlfriends, wives, relatives and maybe even your mind. It could mean not eating for three or four days. It could mean freezing on a park bench. It could mean jail.’ ~Factotum

A lot of writers will tell you the same. Writing is not glamorous or romantic, and good writing doesn’t happen through cute movie cutaway scenes set to music. Writing draws from life, and life is difficult.

Can you handle rejection, long nights, early mornings, and harsh critics together with what Bukowski has described? If you want to be a writer, you have to be ready for anything.

If there’s one more thing that writers can learn from Bukowski, it’s that hard work pays off – and that it feels pretty good to see your work in print, no matter how many articles or books you’ve sold so far.

Bukowski always got a kick out of his writing, and that’s why his writing is remembered today.

Suggested reading: So You Want To Be A  Writer? by Charles Bukowski