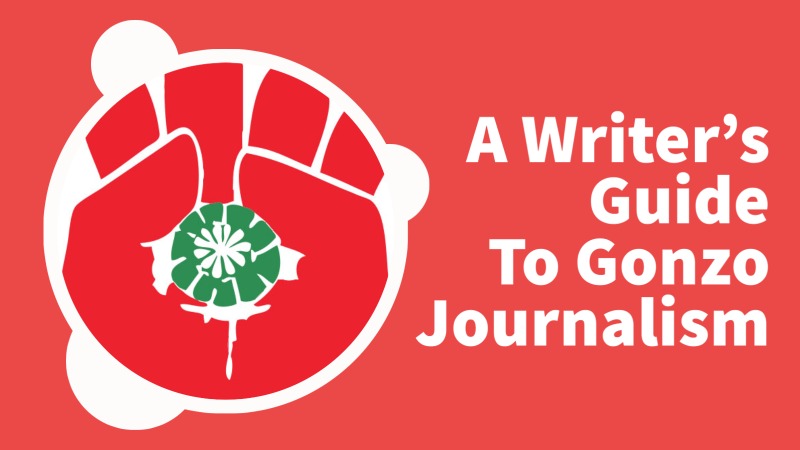 In this post, we explore gonzo journalism, the unique writing style that originated from the New Journalism-movement. We include examples and tips for writing it.

The first appearance of true Gonzo Journalism is credited to American writer Hunter S. Thompson in 1970. The gonzo genre is experiencing a 21st century resurrection.

Here’s a writer’s guide to gonzo journalism (and how it works).

What Is Gonzo Journalism?

Gonzo journalism is characterised by the writer’s immersion into the story’s events, often in first-person. Writing is factual, but techniques like exaggeration, humour, and sarcasm are incorporated.

The role of a gonzo journalist can be compared to a method actor: instead of just telling the story, their personal involvement in its events are crucial.

Gonzo is still journalism, but with a bladed edge and allowed wit.

Hunter S. Thompson is credited as the founder of gonzo with the publication of The Kentucky Derby Is Decadent And Depraved (Scanlan’s Monthly, 1970).

Markets featuring modernised gonzo writing includes VICE (My Wedding Feast Gave All Of My Loved Ones Salmonella), Esquire, Mail & Guardian, and Rolling Stone (Billie Eilish and the Pursuit of Happiness).

The lasting popularity of gonzo-style writing has increased the markets who are willing to publish more. Traditional ‘essay’ markets such as Vanity Fair have included it. See Dominick Dunne On His Daughter’s Murder and Buzz Bissinger’s The Famous & The Dead.

The inherent gonzo-ness of a writing piece should be apparent from its first sentence. Standard journalism (for example, hard news) uses an introduction to state initial facts, but gonzo draws the reader in.

A Writer’s Guide To Gonzo Journalism

Gonzo journalism is known for its creativity, scene description, and writer’s involvement in the storytelling. The story uses facts, but conveys them using a more personal writing style.

The journalist uses their role, interaction, and personal thoughts to drive the narrative. Gonzo writing is less subjective than standard news reporting as a result.

2. Gonzo & Topics: Can Anything Be Gonzo Journalism?

Editors enjoy excellent writing, but editors will not enjoy being surprised by gonzo journalism when they didn’t ask for it. A close relationship with your chosen publication is advised for gonzo work.

Gonzo is still journalism, and stories covered should always remain rooted in fact. Never misquote a source, and never let a creative exaggeration skew a real quotation or event.

Always begin with initial research on the people, the topic, and the setting before any attempted immersion or interviewing. It’s how any smart journalist prepares.

First-person storytelling is a common sight for the majority of gonzo writing you’ll read. For writers, it means immersion and involvement in the story (or story’s arc), and heightened creativity in its description.

Do you think you’ve got a gonzo story coming up? Record the experience, and take detailed notes. Involve yourself in it, and ask a lot of questions. Gonzo means getting involved and writing about what happens next.

Gonzo journalism should never potentially endanger a writer, a subject, or a source. While gonzo often looks crazed and chaotic, its events are never dangerous or illegal.

5. Successful Gonzo Journalism: Putting It Together

A gonzo journalism story works when it has managed to grab the reader until the end, and still conveyed the focal point through creativity and chaotic style.

Collect interviews, recordings, third-party resources, and experiences as a researcher first. After the event, go through these resources to create your story’s outline.

From the skeletal outline, build your sentences (but do not forget your initial statement, topic, or point).

6. Gonzo Journalism Mistakes: What NOT To Do

Gonzo is easy to attempt, but can be tricky to achieve. There are obvious mistakes that separates the good writing from the bad. Here’s what to avoid at all costs if you want readers/editors to enjoy the ride.

If you think that gonzo journalism might be your chosen style, study publications (for example, VICE) and writers (for example, Weiner, Thompson, & Kerouac) with more intensity.

Experience new things, interact with new people, and write about these newfound experiences: this is how the gonzo writer learns.

Image: Two thumbs and four fingers holding a peyote button form the ‘gonzo fist.’ This originated in Hunter S. Thompson’s 1970 campaign for sheriff of Pitkin County, Colorado. It went on to become an iconic symbol of Thompson and gonzo journalism as a whole.