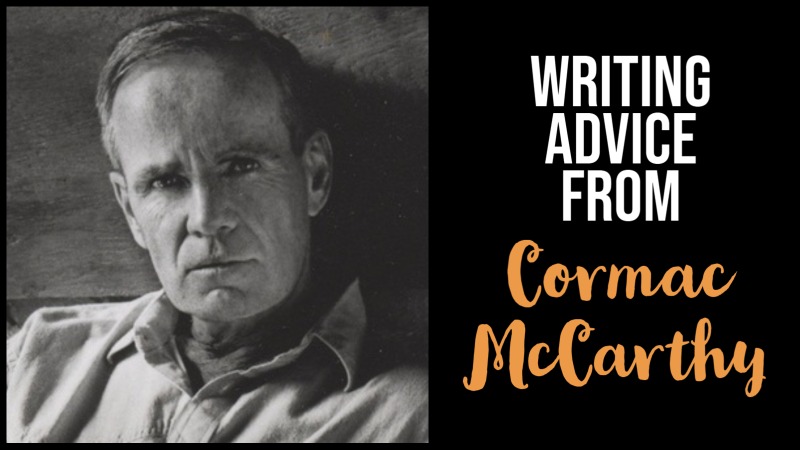 In this post, we share seven bits of writing advice from Cormac McCarthy, the American novelist and playwright.

Cormac McCarthy’s writing is violent, honest, and necessary. The Road was shocking and dark, but also stood out to me as remarkable. I was hooked after one more McCarthy novel – Outer Dark – and I’ve recommended his work ever since.

Here’s what writers can learn from award-winner, Cormac McCarthy.

Cormac McCarthy is an American novelist who was born 20 July 1933.

His debut novel The Orchard Keeper was published in 1965, followed by the novel Outer Dark three years later.

McCarthy is a winner of multiple writing awards, including the William Faulkner Foundation Award and several National Book Awards.

was published in 2006. Its plot explored a father-and-son trip in a post-Apocalyptic world. Conversations in the novel were reportedly based on ones that McCarthy had with his own son.

McCarthy’s latest novel The Passenger remains unpublished so far. He remains active in the literary community, with regular updates to his official website.

Anyone who prepares to write, should expect to edit. A first draft is the very first impression, and the second draft is where you’ll meet your writing again.

Are you finished with draft one? Rewrite! Second drafts are almost always even better.

‘If you’re writing mystery stories or something, you might want to have an outline, because it all has to have a logic and fall into place and have a beginning, a middle and an end. But if you’re writing a novel, the best things just sort of come out of the blue. It’s a subconscious process. You don’t really know what you’re doing most of the time.’ – 2007 Rolling Stone Interview

Outlines are important for fiction that requires ample details and plot points. But outside of writing mystery fiction, McCarthy advised against sticking too closely to outlines alone.

Scenes and plot twists should sometimes be allowed a spontaneous flow.

How will writers still make sense of their plot?

For stream-of-consciousness writing, take notes (and outline) during your second draft. It can allow writers more fun with their initial draft.

‘I like what I do. Some writers have said in print that they hated writing and it was just a chore and a burden. I certainly don’t feel that way about it.’ – 2007 Oprah Winfrey Interview

McCarthy revealed to interviewer Oprah Winfrey that he enjoys the craft of writing. That’s quite something after decades worth of creation and blank pages.

If writing has come to feel like a chore or task, you might be doing it wrong.

As a writer, it’s always important to keep that creative spark. This can be difficult, even for professionals who write daily.

Does writing overwhelm you, or feel like just another task? Change your writing routine, add writing prompts, or explore different genres.

‘I rise at six and work through the morning, every morning, seven days a week. I find the sun has a forlorn truth before noon. The words come unbidden. By early afternoon I have to quit.’ – The Paris Review (No. 223) Interview

McCarthy writes daily, and gets up at six in the morning to do it. He breaks away from his regular writing routine in the afternoons.

What does he do when he isn’t writing? Barbecue dinners at his house with like-minded people. He marinades the meat two hours before guests arrive, and he’s set in his routine.

It’s important to unwind and de-brief as a writer, too. It’s how writers stay sane.

‘I had no money, I mean none. I had run out of toothpaste and I was wondering what to do when I went to the mailbox and there was a free sample.’ – 2005 Vanity Fair Interview

Writing isn’t always easy. McCarthy admits the true difficulty of building a writing career during this 2005 interview with Vanity Fair.

He is referring to the period before 1981, when he received a writing grant at just the right time. McCarthy calls the writing grant ‘one of the most profound experiences’ of his life.

After the grant, he had the room to continue his writing.

Can you imagine if McCarthy had stopped his career right there?

Remember this whenever you feel discouraged as a writer.

‘But the indulgent, 800-page books that were written a hundred years ago are just not going to be written anymore and people need to get used to that. If you think you’re going to write something like The Brothers Karamazov or Moby Dick, go ahead. Nobody will read it. I don’t care how good it is, or how smart the readers are. Their intentions, their brains are different.’ – The Wall Street Journal Interview

It’s tempting for writers to invent an epic, 800-page story… But will readers be interested in reading modern epics?

McCarthy said no in this interview with the Wall Street Journal.

Novels, novellas, and short stories are preferred above epic tales overflowing with length. Modern readers and editors just don’t have the time.

What does this mean for your writing? Remember plain language writing when you hope to interest modern readers who have less available reading time.

7. Collaboration Isn’t For Everyone

‘Yes, it would compel you to avoid it at all costs.’ – 2009 Wall Street Journal Interview

When asked by the interviewer, ‘But is there something compelling about the collaborative process compared to the solitary job of writing?’ this was McCarthy’s witty, dry response.

Writing can be solitary, but also collaborative for some authors: That’s up to the individual writer, though McCarthy certainly prefers to do his writing alone!

With 10 books and several screenplays to his name, McCarthy knows more than just a thing or two about writing well. If you want to write better, take some tips from a Pulitzer-winning writer.

I hope these bits of writing advice from Cormac McCarthy help you with your writing.

As a recap, here’s what McCarthy has had to say about writing during his rare interviews: