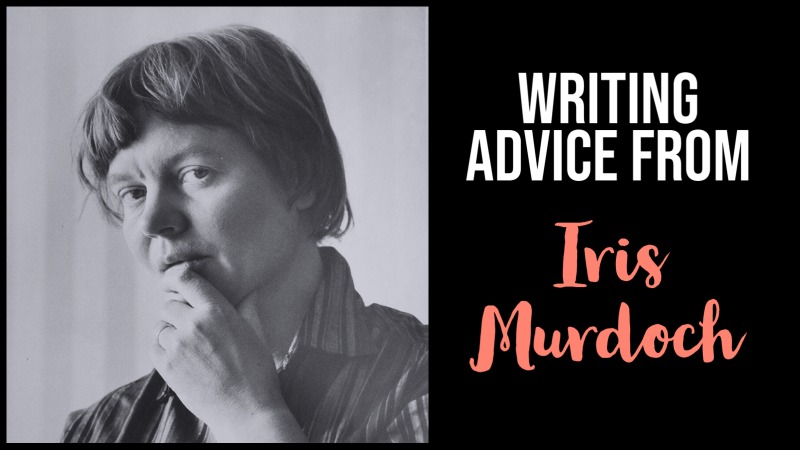 In this post, we look at five bits of writing advice from Iris Murdoch, the award-winning Irish author.

Her first novel Under The Net is considered one of the best 100 English language novels of the 20th century.

Here’s what writers can learn from the work and quotes of Iris Murdoch.

(Dame Jean) Iris Murdoch (born 15 July 1919, died 8 February 1999) is one of the most acclaimed dramatic storytellers of our time. Born in Dublin, Ireland, she would publish her first novel Under The Net in 1954.

Her last novel was published in 1995, and Murdoch would be diagnosed with Alzheimer’s disease two years thereafter.

‘Writing is like getting married. One should never commit oneself until one is amazed at one’s luck.’ – The Black Prince

Writing is about practice, and not about luck. But when Dame Murdoch said this, she meant that ideas should be worth committing to before the writer devotes their time to it.

Ideas should be outlined and tested first. Before writing 20, 000 more words of your idea, outline it first or write a short synopsis. Is the idea still as good as you thought it was at first?

‘I just enjoy translating, it’s like opening one’s mouth and hearing someone else’s voice emerge.’ – Under The Net

Good writing relies on the writer’s ability to play with words. That’s the reason writers are encouraged to read outside their own writing as much as possible. Murdoch enjoyed translating because it could enrich her writing.

An improved vocabulary is an excellent idea for any writer out there, Translating for fun can help writers to build on what they already know about language.

Translations are an especially rich writing exercise, even if you only choose a sentence from a song or story to practise with.

3. Use Plain Language When Writing

‘So I would like people to be able to read the stuff. I’d like it to be understood too; though some of the novels are not all that easy, I’d like them to be understood, and not grossly misunderstood. But literature is to be enjoyed, to be grasped by enjoyment.’ – Interview from The Paris Review (Issue 117)

Writing should be understood, or people won’t find it useful or engaging when they read it. Plain language writing is meant to achieve an easier, universal writing style that can be more widely understood.

Murdoch understood that readers anywhere should be able to read her writing.

It can be difficult to enjoy writing when you struggle to understand it without a dictionary.

‘Of course reading and thinking are important but, my God, food is important too.’ – Sourced From Garner’s Quotations (The Sea The Sea)

Writing distracts easily, and writers should never forget to take care of their most basic needs when engrossed in their craft. Remember to stop for stretching, breathing, and eating.

Writing will involve a lot of sitting down. Repetitive strain injuries, arthritis, and muscle strain are just some of the consequences that might be associated with choosing to be a writer.

If you want to remain physically healthy as a writer, remember to take good care of your health. It’s just as important as the words and where you put them.

‘Yes, of course, there’s something fishy about describing people’s feelings. You try hard to be accurate, but as soon as you start to define such and such a feeling, language lets you down. It’s really a machine for making falsehoods. When we really speak the truth, words are insufficient. Almost everything except things like ‘pass the gravy’ is a lie of a sort. And that being the case, I shall shut up. Oh, and… Pass the gravy.’ – Adapted from Murdoch’s personal letters, requoted in Iris

It’s clear from this quote that Murdoch didn’t like excessive descriptions, or lengthy scenes when there is no need for them. Here’s a top writing tip: Readers don’t like them much, either.

Good writing uses brevity to get the message across. If you don’t need five paragraphs to describe how a lamp flickers, then don’t. Edit until there’s a better way to say it.

Researchers would analyse the text of Jackson’s Dilemma to find that her cognitive abilities and word usage had changed since her earlier work. Subsequent research hopes to find linguistic signs that might improve tests for Alzheimer’s disease.

Words are important, and writers should always pay attention to the words they use in their writing. More than just for communicating, words can reveal more about who we are. I hope these five bits of writing advice from Iris Murdoch help you when you write.