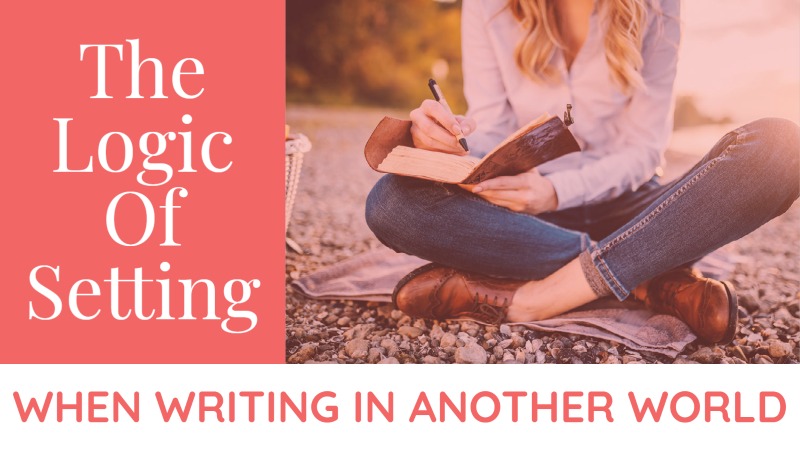 The Logic Of Setting When Writing In Another World

In this post we look at the logic of setting when writing in another world.

Setting is very important when writing. It is the backdrop to your world and holds it together.

And it is even more important in a series or a franchise. Especially, where multiple authors could be writing in the same setting.

Setting, on a small scale or in a huge movie franchise, is the logic and infrastructure of your world. It limits or helps your characters achieve their goals.

If you get it wrong, it will destroy the immersive experience of the world. But get it right, and you will earn a loyal fan base.

Using a few examples I will discuss three important rules for setting.

By the nature of this topic I will be looking at mostly Movies and TV shows that got the setting wrong in some way and how we can learn from them.

The Logic Of Setting When Writing In Another World

Discworld was the bestselling setting in the UK before Harry Potter with northwards of 70 million books sold.

The recent television adaptation of the Discworld Watch series of novels was a tragic failure in tone.

Discworld, as created by Terry Pratchett, was a fantasy setting with a friendly and playful tone. It liked its jokes and poked fun at everything that did not really make sense in fantasy settings.

But, it did this with a strict adherence to internal logic and its prevailing tone.

Even ‘death’ was a light-hearted affair. With the Grim Reaper being a fan favourite character who even saved Discworld’s equivalent of Christmas by slapping on a beard and delivering presents when ‘Santa’ went missing.

The TV show tried something bizarre.

They were obviously trying to incorporate a wacky tone, but on a budget. They did not want to make period sets or deal with old fashioned accents. So they modernised it.

And that ruined it.

The Telegraph said: ‘The Watch takes everything devotees loved about Pratchett: the wryness, the whimsy, the Tolkien-goes-Monty Python setting of Ankh-Morpork. And then chucks it out the window.’

Instead of tongue in cheek fantasy, it became an anaemic rock and roll sort of setting.

Neil Gaiman, of Sandman fame and a good friend of Pratchett, said: ‘It’s like ‘Batman if he’s now a news reporter in a yellow trench coat with a pet bat.’

It still, broadly speaking, followed the plot of The Watch but did not feel like Discworld and so failed.

On the other hand The Hitchhikers Guide To The Galaxy movie, while it was not very similar to the plot of the book, did maintain the tone of the book.

And so, while also getting mixed reviews, at least people did not say it shared ‘No DNA with my father’s Watch’ – Rhianna Pratchett, Terry Pratchett’s daughter.

Tip: Don’t mess with tone. It’s like toying with people’s emotions. You will not be forgiven.

People will not forgive a failure in tone. But, they might overlook logical or continuity problems if it feels right.

However, please don’t use this as an excuse not to do your homework.

Nobody ever brought up logic in Star Wars before The Last Jedi.

This is because no one cared.

If the tone felt right and the story felt satisfying, nobody cared about how one proton torpedo could destroy a whole Death Star. But, if you mess with the tone then you best be prepared for fans to tear your logic to shreds.

But the hateful treatment of Star Wars is nothing compared to the reaction that fans have had to Star Trek Picard.

The show runner, Kurtzman said: ‘Everybody is always trying to maintain continuity,’ Kurtzman told us. ‘But given the 50 plus years of Star Trek, it literally becomes impossible because …and you can’t be consistent with everything. Our goal is always to try, always, always to try and never to negate what has existed in the novels and graphic novels but it is a literal impossibility… And at a certain point, given the volume of things that are out there it’s just impossible for everything to sync up perfectly. So we give it our best effort.’

This is of course just lazy and untrue.

Especially if you are running a big franchise like Star Trek and can employ researchers to check problems for you.

Now there are of course examples in other Star Trek shows of logical inconstancy. However, they got the tone right and so it was mostly forgiven. When I say ‘they’ I mean the team that makes the show including the writers and producers.

In Picard they showed such disdain for the logic of the world that they did not even follow the new rules they themselves had created.

For example, they said that one of the characters was not allowed to join Star Fleet (the navy) because they were a Borg (half robot) in the second season, but in the first season they had a character who was a Borg and who had joined Star Fleet.

When you only have 10 episodes a season these mistakes are really lazy.

This is the ‘physical’ stuff your fictional world is made up of. Like boats, laser guns, and even clothing.

This may be the least important part of setting, but it really adds to the realism of a world when you get it right. And often people confuse this for the whole setting because it is the most visible part of it.

I have two examples of this done right. The Lord Of The Rings and The Expanse.

Tolkien established his tone, his logic, and then he got really detailed about the physical nature of his world.

He knew how big it was. What it had in it. How long it would take to get from place A to place B and all the shortcuts and pitfalls in-between.

He also showed remarkable restraint even though he had magic in his setting. He did not use magic as a cure all.

It was there to add flavour to his setting and not to solve all his characters’ problems. Spells failed as often as they succeed in his book.

What little magic does work feels well-earned by the suffering and effort of his characters.

There is a natural desire to cut out all the boring parts of a journey. And, well, you should if your book or show is not about that journey.

But, if it is about a quest then you have to realise that getting the details right while making them entertaining is actually part of your job.

The Expanse does this very well in the early seasons. We see that space travel takes time.

We see all the tricks that have to be used to enable life on a Starship.

For example, gravity is not just a hand-wave.

We actually get to see how it works and it even makes sense. We are often told about ships and their problems and the writers clearly put some effort into thinking about a logical way to tell their story within the setting that they had created.

It is really refreshing to see this done well and it shows a respect for your readers or viewers.

If you don’t want to do this, then please tell a story that does not need to rely to this sort of infrastructure.

But, well even Sherlock Holmes’ stories use this to great effect. The first Holmes story is about a taxi cab driver who is trying to kill some evil men.

Holmes, of course, uses his sort of logic and knowledge about the industry’s infrastructure to solve this mystery.

In fact, you really need to tell a very lax story with a very low bar of realism to get away with this.

Something like Star Wars or a soap opera would be good examples of this. Something where the emotion is what is most important at all times and not the logic.

For example, nobody talks about the science of getting from planet to planet in Star Wars because it is not important to the story. And people don’t talk about the realism of soap operas because it is all about the drama.

But if you can deliver both logic and emotion then you have a winner.

Tip: Try not to cheat. After all your reader expects your setting to adhere to its own rules. If you suddenly have your character teleporting around your world without explanation, you might as well be season eight of Game Of Thrones. Something I am sure nobody here wants to be. You can always solve you plot problems with logic that does not ruin your setting if you just give it some thought.

For writers who can control their own setting, you have an obligation to at least know the rules of your world and not break them.

Contrary to popular belief, rules add to the setting of the world. And, fans love them. It allows them to understand how the world works.

Tone lets your reader know what to feel, but also what they can expect to reasonably happen in the story.

It tells us that there will be no easy solution in The Lord Of The Rings. It tell us that Luke will win against the odds in Star Wars. It tells us that you should expect death in Game Of Thrones.

Logic and continuity tell your reader that what happened in the past will affect the future of the story. If it doesn’t, perhaps you should not be writing a story that does not fit in that particular setting.

The infrastructure provides a means to tell the story. It adds its own delightful flavour to the story.

Just keep it all in mind and don’t be afraid to let it change your story.

Rules are there to guide us when it is hard to know what to do. So use them and you won’t go wrong with your setting at least.

It won’t make your plot great, but as we have seen, a bad setting will ruin even a good plot, so keep it together!

by Christopher Luke Dean (setting up a joke…)