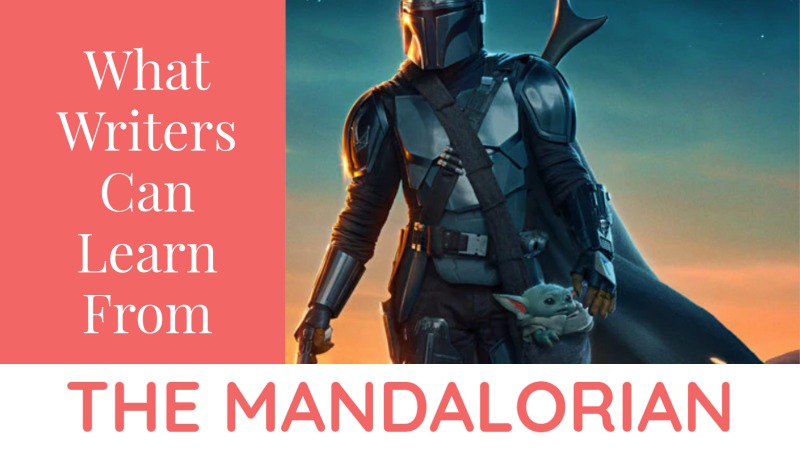 Everybody loves this show, but why does it work? In this post, we look at what writers can learn from The Mandalorian.

For the purposes of this article, I will explore why The Mandalorian is a more popular story than the last Star Wars trilogy: episodes 7, 8, and 9.

A Disappointment To Say The Least

We’ve all heard of KISS, which stands for Keep It Simple Star Wars.

Star Wars should be the biggest franchise in the world. It was for decades, until the Marvel Cinematic Universe stole its limelight.

When Disney bought the property in 2012, we all expected big things for the franchise.

Fans hoped the people that made comic book movies work for mainstream audiences would bring Star Wars back to the big screen like it hadn’t been since the Eighties.

Unfortunately, this did not happen.

It started well. The Force Awakens did well and served as a workman-like bridge between the old movies and a new cast.  But, well, everything after that made less money in the box office and drew smaller audiences.

It wasn’t just the worse than expected returns for the movies. The films began to attract severe criticism. Some of it was earned, and some of it was the nonsense we have come to expect from the internet.

Sadly, I would say these films deserve most of the criticism they received.

On the other hand, The Mandalorian has only been praised, aside from a few people who are upset for ‘fringe’ reasons.

With the news of this success, Disney has reacted, perhaps overacted, and released plans for a half dozen ‘Plus™’ new Star Wars TV shows on their subscription service.

What Writers Can Learn From The Mandalorian

Think of a character from the new Disney films. Can you remember their name?

Think of a character from The Mandalorian. I’m guessing you are picturing Baby Yoda or his macho space dad. I bet you even know Baby Yoda’s name is Grogu?

But, Why Is It So Much Better?

There are two main protagonists and one villain.

Contrast this to the movies where we didn’t even know who the villain was until the last movie. There were also so many protagonists that some of them only had cameos in the final film.

We get to spend a lot of time with our protagonists in The Mandalorian. This helps us bond with them.

Again, it’s simple. Man (Mando) finds child (Baby Yoda), gets attached to the child, and has to protect him.

It’s easy to understand. We know the stakes and we are invested in the protagonist’s goal. Anybody who wants to hurt Baby Yoda must be evil.

I don’t know what the overall plot of the films was.

There were themes, but themes don’t make people invested.

The problem was that each film had a different and vague goal.

Even after watching them all there was no feeling of resolution. I don’t know what was at stake and I am not sure I really cared if the heroes won or lost.

What I do know is that if anybody hurts a single hair on Baby Yoda’s head, they deserve death.

In The Mandalorian every episode has a theme. This theme comes with a simple narrative that our protagonist must solve.

Each episode is self-contained, but progresses the story and fits into the next episode.

There is a gradual escalation, but nothing stupid – like blowing up a whole solar system or a thousand mini Death Stars.

In the end of The Mandalorian, we are left satisfied that the question each episode asks has been answered.

In the films we have a hodge-podge of stories, some of which go nowhere.

The films do not feel as if they fit together well. Each film has characters that act in uncharacteristic ways, and they all leave questions unanswered.

This leaves us frustrated, both with too much information and not enough resolution. It is also confusing to follow.

The Mandalorian is directed and run by Jon Favreau and David Filoni. Favreau, who directed Iron Man, is a fantastic choice because he is able to create simple stories out of silly worlds and make them feel real and down-to-earth.

Filoni, always pictured in a cowboy hat, has made Star Wars animated TV shows for 15 years. He knows the universe. He is who people expected Gorge Lucas to hand his company over to before Disney bought it.

In this sense, we have gone back to basics. Just like the first Star Wars movie. We have a series of simple goals and straightforward, but not boring, characters.

Contrast this with the direction of the Disney films, where it is reported that the directors of the separate films had not even read the script of the previous film by the time they started shooting the next film.

I don’t know if that story is true, but watch them and decide for yourself.

So What Can Writers Learn From The Mandalorian?

Disney obviously did not have a vision for these films – except to make them look stunning. As a result, we have beautiful disappointments.

They had too many people with different visions in control at different part of the process.

However, you will always be able to correct this. Any writer should be able to do the following:

Also, if you find yourself writing for an existing fan base, try not to upset them. People are more likely to recommend things that don’t upset them. It’s so simple, but Disney seemed to forget this for a while.

The Mandalorian does this well. It makes old fans happy. It’s easy to understand for new fans, or people who don’t know much about Star Wars.

I’m happy to recommend it to anyone regardless of what type of person they are.

And, most importantly, I always want to watch the next episode.

I don’t know if I really want to see the next Star Wars film anymore. I think my 12-year-old self would be shocked that I could write a thing.

I hope this helps writers realise what they can learn from The Mandalorian – and apply it to their writing.

Written by Christopher Luke Dean (This is the way.)