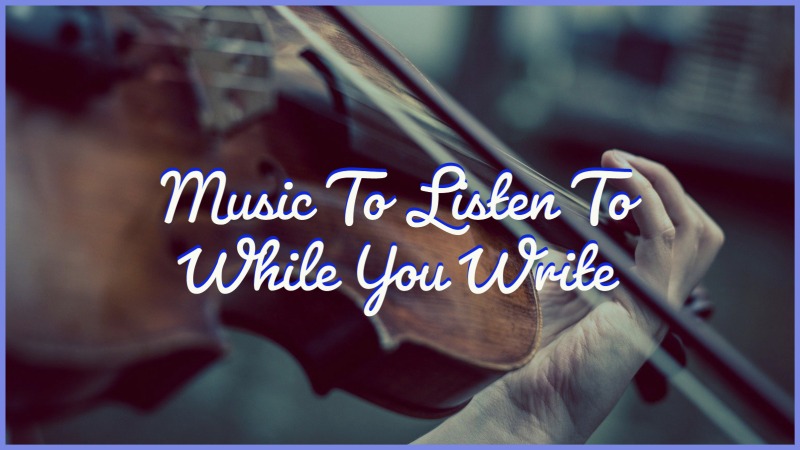 What are the best sounds to type to? Our guest blogger has a few ideas on the best music to listen to while you write.

Music To Listen To While You Write

As I write, I am listening to some piano music by Philip Glass, which he composed for the film The Hours. It is pretty, melodic, harmonious. I am struggling with it a little because I’m finding it engaging and want to listen to it more closely. This is generally what we might want of a piece of music, but music to write to is a special category.

As one commenter puts it below another Youtube Glass recording: ‘This is good writing music. The constant repetition and variation in this soundtrack are hypnotic. The music puts you in a productive trance and squeezes out just enough emotion to keep you engaged, but not a surfeit of feeling that will distract you.’

Indeed. I want the background, the accompaniment, of music. I want the beauty, the patterns, the arc. But I don’t want too much drama or emotion. I want wallpaper that is more than wallpaper. Something I can dip in and out of but is far less demanding than a recital or a gig. And, God forbid, I do not want words. How could anyone write any words of their own to a sonic background — of words?

You might be smiling in agreement or violently shaking your head. But the chances that you have strong opinions of your own on this topic too. Writers and other creators are very particular about the soundtrack they work to.

What Do Writers Choose To Listen To?

A recent survey on LinkedIn asking people if they listen to music while they work elicited over 25,000 votes and nearly 1,000 comments. Some 78% responded in the affirmative. And with more of us working from home, the WFH playlist question has become more urgent. Spotify saw a 1400% increase in interest in them after just two months of lockdown.

The comments throw up a wonderfully esoteric range of preferences. They include Mozart’s 27 piano concerti on shuffle, baroque, late Liszt, Japanese animation soundtracks, and even Psycho score composer Bernard Herrmann. There were also votes for natural or biophilic sound, typically wind, water, birds. These have a proven effect on wellbeing and productivity.

As this article by Dale Berning Sawa explores, there’s a whole science to the music we choose for relaxation and concentration. For writers, it depends what you’re like and your goals.

The many wonderful musical leads I picked up from Sawa’s piece include the extraordinary acoustic textures of Richard Skelton. And Jurassic Park theme 1000% slower. It’s part of a whole genre of super-slowed down music I never knew existed. I especially enjoyed Minecraft Music Slowed Down with Rain.

Some people find silence distracting or even anxious-making. They want a blanket of sound that they can cocoon themselves in, to shut out all extraneous stimuli. I know of one writer who can only write with cotton wool in their ears, plus noise-cancelling headphones.

But for something between silence and music, you might try the coloured stuff. There’s not just white noise, as I discovered, but other colours too, such as Deep Layered Brown Noise — not to be confused with Pink, White and Brown Noise. I didn’t think I’d like this kind of thing, but I found it hard to switch off.

Certainly, you don’t want music that’s too noisy or eventful or unpredictable. But can the music be too boring? Perhaps not, if like this it’s not really even music. This continuous sound has texture and a certain depth, but no pattern or progression. It feels more like heavy rain. Or sitting in an air-conditioned womb, or dozing on a plane. It has no start and no end really. It never changes. It is strangely comforting.

It may be the perfect music to listen to while you write.

By now the musical Youtube rabbit-hole is beckoning me:

Some writers can only write to a single piece of music. I tend to listen obsessively to one soundtrack for a long piece such as a novel. For many months I listened only to a contemporary symphony for drums. But it fell off a BBC site and I’ve never been able to find it since. Persistent choices can work because we associate them with past achievements. Or they may somehow imaginatively connect to the world you’re creating now.

It’s an odd way to approach music. I realised this when I asked my uncle, an accomplished tenor, for his recommendations. He scratched his head as I explained my requirement. ‘What you’re really asking for,’ he said at last in befuddlement, ‘is music you don’t really want to hear.’

Similarly, several LinkedIn comments from professional musicians said they were incapable of doing other work with music on. They engaged with it far too strongly for it ever to be just background. I suppose it is sort of anti-musical, this writing soundtrack business.

But what I want is something subtle, with some pattern and repetition. Something I won’t hear all the time but won’t ignore completely either. As another commenter puts it, ‘Ideally something contemplative with the occasional surprise distraction of “oooh that was cool”.’

My own playlist is pretty esoteric. I’ve tried and tested it over a few hundred thousand words. I have to say that classical music works well for me. I have happily worked my way through the symphonies of Beethoven and Bach. But there are times when even a heartless unmusical heathen like me cannot but be swept away by what I’m hearing.

Here is a highly idiosyncratic selection of some of my favourite writing soundtracks:

I hope this post inspires you to find suitable music to listen to while you write your stories.

by Dan Brotzel. Dan is the author of Hotel du Jack, a collection of short stories, co-author of Kitten on a Fatberg, a comic novel-in-emails about an eccentric writers’ group, and Work in Progress (Unbound)