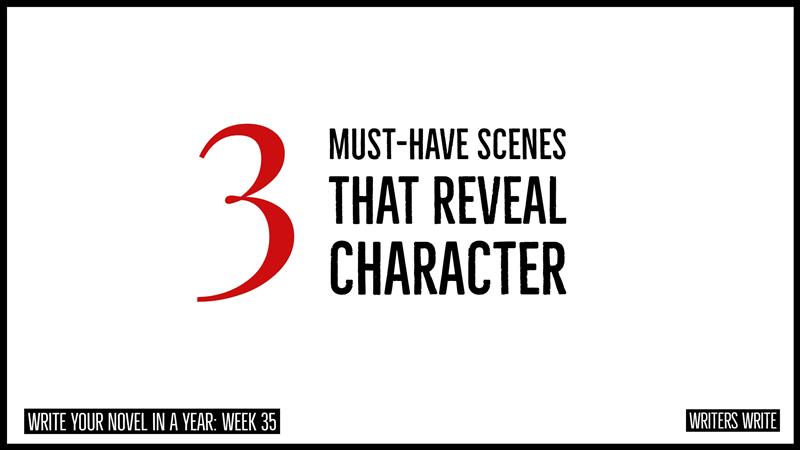 Write Your Novel In A Year – Week 35: 3 Must-Have Scenes That Reveal Character

How do you define and show your character? We have included 3 must-have scenes that reveal character in this post.

Welcome to week 35 of Anthony’s series that aims to help you write a novel in a year. Read last week’s post here.

Use The Monogram Scene, The Momentum Scene, and The Glimpse Scene to make your characters real.

In elegant days gone by, characters would emerge from the bathroom or boudoir wearing a monogrammed robe – it was usually white or a rich velvet affair.

In much the same way, you have to give your main characters a scene or two that ‘mark’ them as individuals – interesting characters we may want to follow in the story as readers. These scenes must show who that character is at their very essence.

It helps if you can find a brief description or key words that ‘nail’ that character. For example, my antagonist, Monty could be described as rich, entitled, and narcissistic.  OK, great – how do you show that in a scene?

For this scene, I have Monty flash his credit card to pay for drinks at a downtown club, only to have it declined, which sends him into an abusive rage with the waiter. He points out that the shoes he’s got on cost more than the waiter’s monthly salary. Hopefully, it shows him for what he is – a rich kid who likes to get his own way.

Have you ever agreed to go on a blind date? There’s usually a build-up of anticipation, the date itself – it’s usually awkward and anticlimactic – and then the aftermath of the date.

Once your character has made a decision, whether a big decision or a small decision, they need to act on it – with careful deliberation or rash impulsiveness. The first could be the decision to go to gym to lose weight, the second is to eat half a chocolate cake at two in the morning.

It could be a moral decision or a life-and-death decision. It doesn’t matter. Here’s your chance to show your character – with all their strengths, flaws, anger or sense of humour – doing something.

Whatever your character decides, the natural flow of story dictates that they have to act on that decision. They need to be motivated. This gives you a chance to show your character signing up for gym, struggling to programme the treadmill, feeling foolish in their new gym gear, etc.

The point is you can’t have a character decide something and then they accomplish it in a few paragraphs. What a let-down for the reader – and no fun for you as a writer!

You have to build up to that decision, tease it out in a scene, and show what comes after. It’s about moving things forward – building momentum. It’s the basic principle of scene structure: build tension and then release it. The one thing that can destroy a story is if we don’t believe the characters are real – if they seem too slick, too perfect, or too invincible, we don’t have anything for the reader to relate to. We always need a glimpse into their humanity. Just a glimpse. That’s all.

A glimpse could be the ruthless tycoon who weeps when he learns his favourite Alsatian attack dog has been poisoned. It could be the doting mother who, over one too many wine spritzers, wistfully confesses to her neighbour that she dreams of running away. Show fears, phobias, secrets, flaws, all those things that make us human.

‘You invent and control characters. You decide whether they live or die.’ — Sidney Sheldon

Look out for next week’s instalment of Write Your Novel In A Year: Week 36: 3 Must-Have Scenes That Reveal Plot