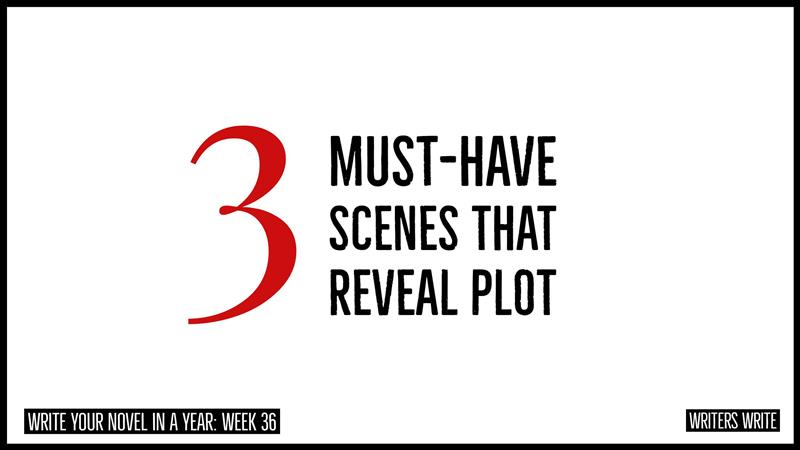 Write Your Novel In A Year – Week 36: 3 Must-Have Scenes That Reveal Plot

Writers Write creates and shares resources for writers. This post is about the three must-have scenes that reveal plot in your novel.

Welcome to week 36 of Anthony’s series that aims to help you write a novel in a year. Read last week’s post here.

This week, we’re looking at the three scenes that are a must-have to help you plot your novel.

A portmanteau is a rather old-fashioned term for a suitcase. My grandmother used to have one on top of her wardrobe. It was usually a hard-shell suitcase that opened into two equal parts, and lined in a silky material.

Of course, a portmanteau term is also a something that combines two different words – a mash-up that makes sense, like ‘bromance’ or ‘frenemy’. In much the same way, you can have a single scene that ticks two boxes.

The scene can either reveal character and plot, or plot and setting, or plot and theme.  For example, say you have a pop star hoping to make a comeback. She is at the offices of her record label for a meeting with an executive, walking down a corridor, and sees someone taking down her framed platinum record and replacing it with the platinum record of a younger, hotter star.

That would be a cool way to show theme and plot – and even a bit of setting.

You could perhaps have a scene that shows a character – who just happens to be a vampire – passing a pretty but drugged-out prostitute on a dark street. He doesn’t believe in attacking easy prey and even gives the poor creature some money. This shows his character and his values. As he is about to turn the corner, he spots the prostitute being attacked by a gang – but by the time he gets to her, she is dying. He has no choice but to turn her into a vampire too. This could be an important plot point – she could turn out to be his love interest, or even an antagonist.

The more I think about it, I believe most scenes should be earning their keep – and doing more than one thing.  A good question to ask is: What else could this scene accomplish?

Sometimes you want to show time in a vivid way in your story – you either want to compress time or stretch it out.  This is when pacing can help you when constructing a scene. The time cut is something we can loan from the world of screenwriting.

For example, in my novel, I want to show how long and punishing a photo-shoot can be for my main character, Jenna.  At the start, I show her in jeans and boots, hair loose and styled, sipping her first take-away cappuccino.

I can then use a time cut. It’s two hours later and Jenna is barefoot, hair tied back in clumsy ponytail, stacking empty Styrofoam cups as she drains a bottle of mineral water.  This is a good way to move a scene along quickly.

If you want to ‘stretch’ time, you can use a similar technique. Think of it as a camera on time lapse.

In another scene, I have my antagonist, Monty, suffering from insomnia. He lies on his bed, staring at the window. He sees the window ‘shade’ from black to grey to blue. He starts the scene clothed and ends the scene naked – a carousel of songs also spools through his brain as he listens to his iPod.

The idea behind the action build is to write just with action – limiting the amount of dialogue or interior thought you use.

It’s where ‘showing’ rather than ‘telling’ becomes the focus of a scene. It’s about building tension while keeping your reader a little bit in the dark.

For example: you could show a woman scrubbing herself obsessively in the shower, drying off while she shivers. She swallows some tranquillisers before flossing and brushing her teeth. She enters the bedroom – where her partner lies. Not looking at him, she turns on a noisy dryer. Her partner doesn’t stir or wake as she styles her hair, gets dressed in an amazing outfit, applies her make-up. At the end of the scene, she calmly picks up her cell phone, punches in a number. When the call is answered, she says, ‘I’d like to report a crime. I just murdered my husband.’

This is a great way to start a scene – or even a novel – as it focuses on just what the character is doing and the reader has to guess why they’re doing this.

• Spend an hour or two writing each of these key scenes.

‘I don’t praise plots as accurate representations of life, but as ways of keeping readers reading.’ — Kurt Vonnegut, Jr.

Look out for next week’s instalment of Write Your Novel In A Year: Week 37: Rules Of The Game