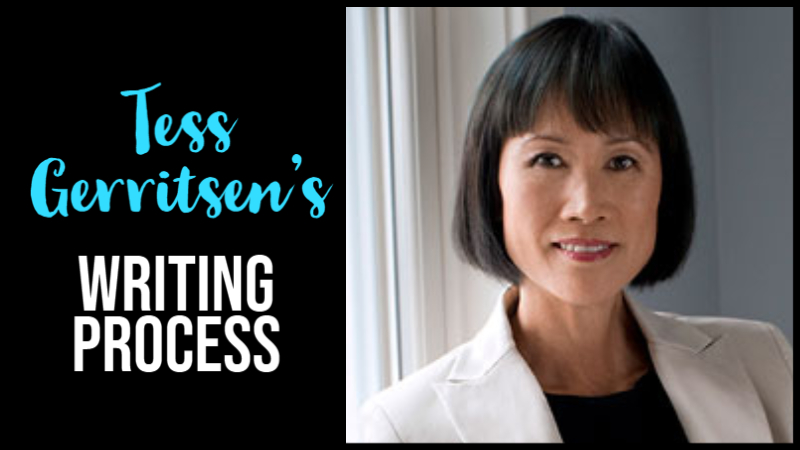 Writers Write is a resource for writers. In this post, we look at bestselling author, Tess Gerritsen’s Writing Process.

Tess Gerritsen is an American novelist and retired physician. She was born 12 June 1953.

Tess’s first medical thriller, Harvest (1996) marked her debut on the New York Times bestseller list. Since then, her books have been published in 40 countries, and more than 30 million copies have been sold around the world.

Her series of novels featuring homicide detective Jane Rizzoli and medical examiner Maura Isles inspired the TNT television series Rizzoli & Isles. The latest book in the series is I Know a Secret

In a blog post on her website from 2009 titled ‘Doing It’ we found out more about her writing process.

She starts off by saying that every writer’s process is different: ‘The writing process is something every writer evolves on her own. After having completed this 22 times, I’ve grown to learn what works for me.’

Find An Idea That Focuses On A Character’s Predicament

‘So my number one piece of advice for a writer is, find an idea that focuses on a character’s predicament. Not on generalised concepts like sex trafficking or serial killers or global catastrophe. Start your story in a very personal place, with a character who is facing a crisis. Once you’ve got that, your story will follow what happens to that person. My next job is to find out why is it happening?’

‘During my first draft phase, I try to write about four pages a day. I know that I’ll get through a first draft in about eight months, on that schedule. I don’t stop to revise — I just forge ahead, through thick and thin, and through some really rough work. Some of it is horrible. That’s okay — I’ll come back and fix those scenes. Since I don’t outline ahead of time, I don’t always know the solution to the mystery. So I’ll wander in the wilderness along with my characters, until I get about 2/3 of the way through and I’ll be forced to find answers. And then I can finally write to the end.’

Don’t Stop To Revise In The First Draft

‘May I repeat: I don’t stop to revise during the first draft. Because it’s all going to be changed anyway, when I finally figure out what the book is about.’

In the third draft, she checks her character’s motivations, emotions, and dialogue. She says: ‘The third draft starts to look a little better. Here’s where I try to hone the logic and the motivations, where I try to make the dialogue more subtle. My first draft dialogue tends to fall like a sledgehammer. Characters say exaggerated things, or have exaggerated responses. That’s because I’m painting with broad strokes, just to help define the emotions. The later drafts are about keeping those emotions intact, but allowing the characters to express them in less overt ways.’

Send It To An Editor

‘When I finally get to around draft four or five,… I’m sick of the whole thing and don’t want to look at it again. So, for better or worse, it usually goes off to the editor. And then comes the wait as she comes up with the editorial letter suggesting changes.’

Even with this process, she says it is still difficult to write books. She ends with: ‘Every book has been agony to write, and has made me question why I’m in this profession.’