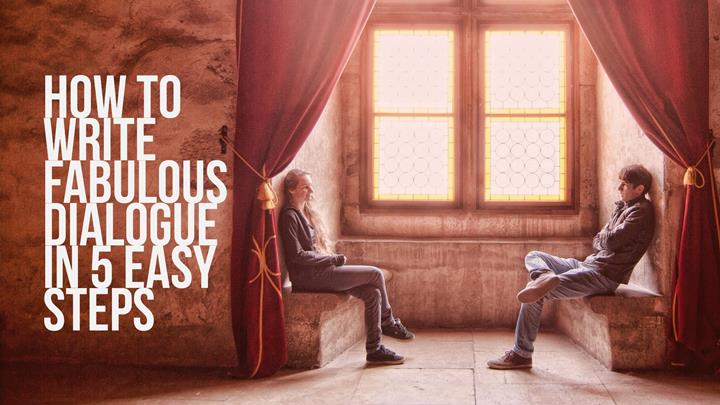 Writers Write is a resource for writers. In this post, we give you advice on how to write dialogue in five easy steps.

I love dialogue. It is my favourite part of writing. It is also my favourite part of reading. I often skip blocks of description, especially if there is a lot of it. This habit translates into my writing, which isn’t ideal. I love writing that shows. That is full of action and people who do things. This is what I strive for and dialogue is the easiest way for me to do it.

Over the next few weeks, I’ll be discussing dialogue in detail.

You will find an example of how I start with dialogue below. I plan as little as possible. If you know your characters well, that won’t be a problem. If you are still getting to know them, dialogue will help you to find out who they are. The first thing you’ll notice about the piece is that it is a classic or even extreme example of talking heads. No setting. No body language. No description.

I sort of do that deliberately when I write dialogue, because I want it to be able to stand on its own, and remember what I’ve said before about being an under-writer? It just comes out that way. I don’t want to rely on the other elements just yet. They are needed – don’t kid yourself. I can get away with this because it is a short piece, but it’ll become irritating for a whole novel.

In short, don’t plan. Go for it, but remember dialogue has a function. It should:

This is an example of a very rough first draft:

As you can see, I don’t even bother with dialogue tags. I just want to get it down as quickly as possible.

Does the piece do the following?

EXERCISE: Use the dialogue example above and write your own version of it, with description added, in the comments below. Please keep it under 300 words. It’ll be awesome to see your writing and the variations that you come up with.

Look out for Step 2: Layering next week when I’ll post my rewritten version with a checklist for the fixes.

Top Tip: If you want to write a book, join our Writers Write course in Johannesburg or sign up for our online course.

This article has 9 comments