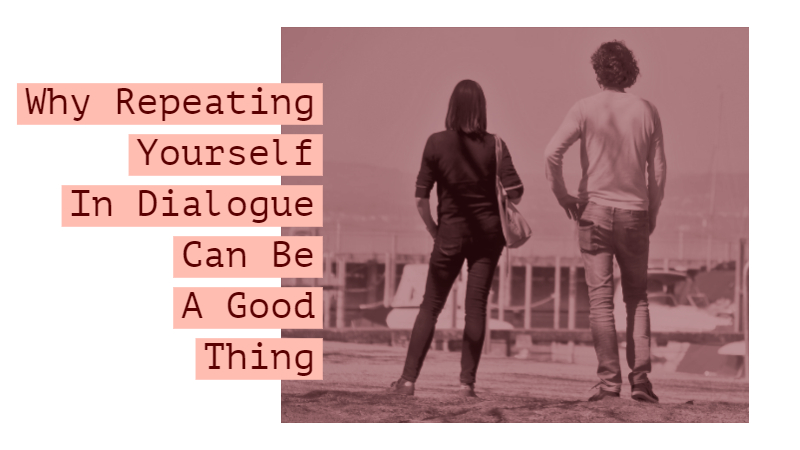 Why Repeating Yourself In Dialogue Can Be A Good Thing

Writers Write is a resource for writers. In this post, we tell you why repeating yourself in dialogue can be a good thing.

This is the fifth step in my dialogue series, How To Write Fabulous Dialogue In 5 Easy Steps.

Step 5: Why Repeating Yourself In Dialogue Can Be A Good Thing

Today, I want to talk about why repetition is a powerful writing tool. Used correctly, it becomes a great literary device. Used incorrectly it is annoying, clumsy and points to a lazy writer.

Here is a list of all the kinds of repetition you can use as a rhetorical device, but because I am still on a dialogue spree, I’d like to talk about the use of repetition in dialogue. It’s awesome if you can use your character’s words in this way. It is so simple, yet so effective.

It ties up the story, shows the character growth as well the change in the relationship between Buzz and Woody.

The father loves his son’s words at the beginning. After all, his son wants to emulate him.

Now this repetition isn’t as direct as the Toy Story example, but it works just as well. It shows how the story has come full circle, how the son grew up and what the father regrets. Fun fact: A recent study shows that the more the chorus is repeated in a song the more likely it is to become a hit.  Now, I’m not saying go write a chorus for your book, but it is interesting to note how we react to repetition.

3. In a book: The Fault in Our Stars by John Green (Spoiler Alert)

John Green used ‘okay’ as a way for Hazel and Gus to express their emotions in The Fault in Our Stars. It is sweet and beautiful. This is what he had to say about using ‘okay’ and ‘always’ in an interview.

He uses it several times during the novel and it makes you smile or bawl your eyes out every time.

However, think carefully before you repeat dialogue. Repeated conversations suck and that is not what I want you to do.

Remember that dialogue must:

And remember, a thesaurus is evil. Don’t go adding big or fancy words because you don’t want to repeat a plain one. The simpler the word, the stronger your writing will be. Think Hemingway.

Exercise: Use the line “Never is a long time.” Write a scene and try to turn the character’s own words against him. Writing prompts are an excellent way to exercise the writing muscle.