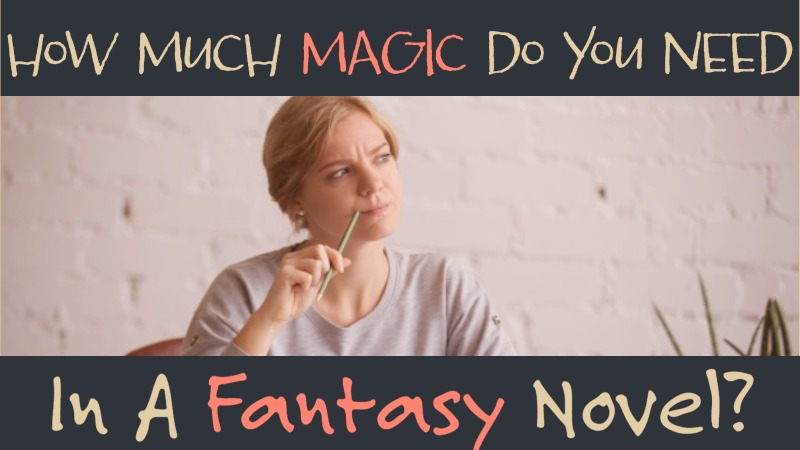 How Much Magic Do You Need In A Fantasy Novel?

In this post we will answer the question, ‘How much magic do you need in a fantasy novel?’

How Much Magic Do You Need In A Fantasy Novel?

I love fantasy and it is a very big genre. As with all genres, readers have certain expectations. With fantasy it seems that the readers are a little more invested than in other genres so the writer really has their work cut out for them.

Fantasy novels typically take place in the past and have magical elements, but note I said typically. How much is included depends on your story and the sub-genres within fantasy.

We mainly divide it into two broad categories namely, high fantasy and low fantasy. Meaning more magic or less magic, but I use the term magic loosely.

Read: 7 Ways To Create A Spectacular Magic System For Your Novel

This is not very common but possible. Think about the book/movie The Waterhorse. It is about a friendship with a mythical creature, but there is no wand waving. It is still considered fantasy, because of the mythical creature.

Low fantasy: This is typically a story still set in reality, but with magical or fantastical elements. This can be a story set on earth and subject to the ‘rules’ of earth, but with the presence of ‘not of the earth’ elements. Low fantasy novels may have elements of telepathy, for example, but the characters still have to go to high school and worry about acne. The magic intrudes into the ‘real’ world. These books may have secondary settings and the characters move between this world and the new world.

High fantasy: Most fantasy novels fall into this category. These books take place in alternate or otherworldly settings, as in not on earth, but not usually in space (that’s sci-fi). You will have lots of magic and different creatures and beings. Worldbuilding is of the utmost importance. Think of trolls and fairies and dragons.

Read: 7 Ways To Create A Spectacular Magic System For Your Novel

Although it is easy to think that magic realism is a part of the fantasy genre, it actually falls into a category of its own. How do you know? It’s not fantasy; and the whimsical, magic or non-realistic events or characters simply form part of the story.  The story, despite the magic, is still very firmly set in reality. The magical elements are not the primary focus, they are part of the conflict. Think about Like Water for Chocolate

by Laura Esquivel or The Strange and Beautiful Sorrows of Ava Lavender by Leslye Walton.

Read: The 4 Pillars Of Magic Realism

There is plenty of overlap within the genre and it is up to you to decide how much magic you need to add or use.