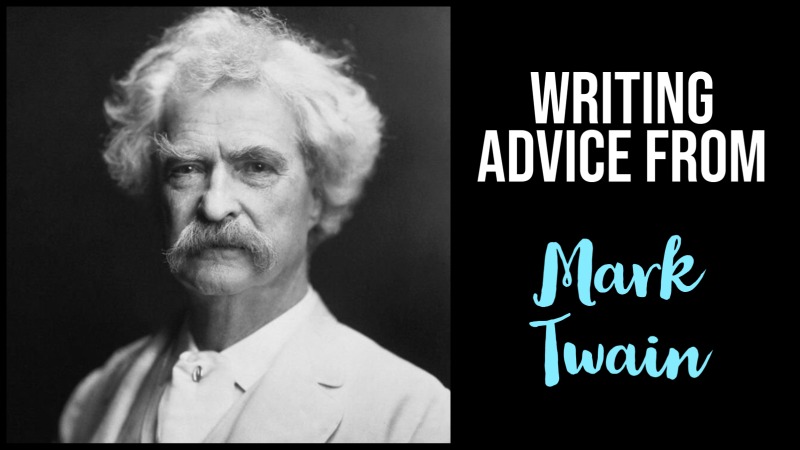 In this post, Writers Write has some of the best bits of writing advice from Mark Twain.

Mark Twain was a famous American lecturer, poet, and writer.

He is famous for his classic boyhood adventure stories. Twain wrote The Adventures of Tom Sawyer

and The Adventures of Huckleberry Finn

. He also wrote other tales, like Life On The Mississippi.

Huckleberry Finn took him seven years to write. Twain also used the time to patent his own board game. He called it The Memory Builder.

Here are 7 bits of writing advice from Mark Twain.

1. Use The Right Word

I grew up with a parent who would describe anything that was exceptional, impressive, or ground-breaking with one word: good.

He didn’t read much, and didn’t always have the right words.

Mark Twain’s advice is to always find the right word.

A large vocabulary enriches your work. They add clarity, and help you with your use of plain language.

‘As to the adjective: when in doubt, strike it out.’ – Pudd’nhead Wilson

Adjectives aren’t the editor’s favourite part of speech. Career writers learn not to over-use them. The adjective is often a lazy way to express yourself.

Mark Twain noted his dislike for adjectives in the novel Pudd’nhead Wilson.

Don’t reach for the adjectives. Look a little deeper in your word collection.

‘A successful book is not made of what’s in it, but what is left out of it.’ – Letter to H.H. Rogers, The Complete Letters of Mark Twain

This point is about not overwriting. Don’t include unnecessary backstory and too much description. Just start the story and get on with it.

What isn’t said is also a way of getting readers to use their imaginations. Fan theories make up millions of message board threads and blog posts. You want to know what happens next when a story doesn’t say it.

Mark Twain understood how important this is.

I like to imagine that characters are busy with other things outside the story. Like video game NPCs, they go about their day undisturbed by the writer.

Always leave space for readers to think about the characters after they’ve read the story.

‘I haven’t any right to criticize books, and I don’t do it except when I hate them.’ – Letter, Mark Twain: Complete Works

We need to read everything. I seek out bad books and read them often. We need to train our eye to spot bad writing.

You have learned about writing every time you see a bad plot.

Twain hated Pride & Prejudice so much that he wanted to exhume Jane Austen just to ‘beat her over the head with her own shinbone’.

‘You need not expect to get your book right the first time. Go to work and revamp or rewrite it.’- Mark Twain At Your Fingertips

New writers expect perfection the first time. That is impossible. Mark Twain advised writers to go to work after the first draft.

First drafts are meant to be second ones, third ones, and eventually published. But a first draft is still an uncut, unpolished piece of granite to the artist.

‘The public is the only critic whose judgment is worth anything at all.’ – Life As I Find It: A Treasury of Mark Twain Rarities

Critics are paid to like or dislike a title in print. The public pays their own money, and then decides if they like a book or story.

Use beta-readers. Read your article comments. Enable comments on your blog. Speak to people. Listen to the public. They are your final market!

‘Let us guess that whenever we read a sentence & like it, we unconsciously store it away in our model chamber.’ – Mark Twain Collected Tales, Sketches, Speeches & Essays 1852-1890

Style isn’t born, but made over time. The more we write, the more we develop our own style.

A hearty bolognaise is a slow process. A roast takes hours. Don’t rush your style. Give it time and let it develop.

Twain said we absorb style when we see sentences we like.

It’s true, and you will absorb writers like a literary sponge. Be careful, and make your style your own.

We hope these bits of writing advice from Mark Twain help you with your writing.