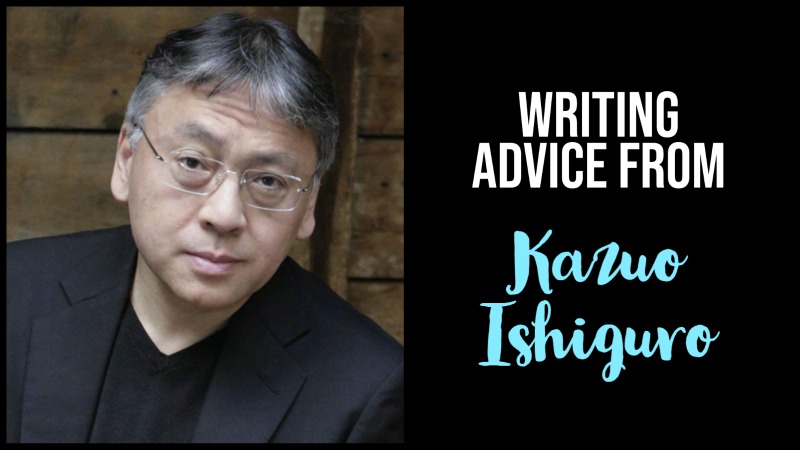 In this post, we share seven bits of writing advice from Kazuo Ishiguro, the 2017 Nobel Laureate in Literature.

He is a Japanese-born British writer, screenwriter, and musician. He is also a Nobel Laureate in Literature (2017).

Ishiguro’s work is known for his use of topics like robotics, artificial intelligence, and dystopian life.

An award-winning writer and screenwriter, he is also a musician, and often collaborates with other jazz artists.

He published his debut novel, A Pale View Of The Hills, in 1982. Other novels include An Artist Of The Floating World in 1986 and The Remains of the Day in 1989.

Ishiguro has received a Booker Prize more than once, but he won it first in 1989 for The Remains of the Day.

He is acclaimed as one of the best modern contemporary writers. His latest novel, Klara and the Sun, was published in 2021.

His daughter, Naomi Ishiguro, writes too.

Here are the best bits of writing advice from Kazuo Ishiguro.

1. Take Breaks, You Need Them

‘When it comes to the writing of novels, however, the consensus seems to be that after four hours or so of continuous writing, diminishing returns set in.’– The Guardian

Kazuo Ishiguro admits that breaks are important to his work.

A break is recommended at least every 15 to 20 minutes. Typing for hours can be physically and mentally exhausting.

Creativity is more difficult when you are asleep at the keys. Stretch between paragraphs or scenes. Take regular breaks in your writing day. Have lunch. Drink coffee.

A character is seldom all-knowing about the story’s plot. It all depends on which viewpoint (point of view) you use.

Their discovery is like the reader’s journey through the pages. It’s how you surprise the reader with things the narrator did not necessarily know at the start.

Ishiguro distinguishes between what the character thinks happened, versus what actually happened. He uses the unreliable narrator technique.

Do you see that wiggle room in your story? The potential exists in almost every plot.

‘When we create stories for movies or just stories that we tell each other when we meet, this is something very, very fundamental.’ – The Washington Post

Ishiguro had this to say when asked about the merit of a Nobel Prize for Literature.

Stories are important, and everyone has them. We tell our stories on taxis, buses, and social media networks: pay attention to everyday storytelling as a writer.

These stories can teach you how people speak, and how plots reflect in real life.

Writers can learn how to construct strong characters, and built better dialogue. All by watching real-life happen, and paying attention to it.

Plan your plot, but allow for free writing to create scenes. It allows room to improvise your scene, but plan your plot!

‘Don’t take on a creative project lightly.’ – An Interview With Richard Beard

I remember a time when I thought it was a good idea to start A New Great Novel about every week. A year would produce several starts, but never a finished book I could publish.

Once a story begins, it becomes a tangible project. Once it exists, there are expectations: a beginning, an ending, and hours of your time as its writer.

Are you okay with this?

If the answer is yes, then you are not taking on your creative project ‘lightly’ as Ishiguro warns against.

‘Write what you know is the most stupid thing I’ve heard. It encourages people to write a dull autobiography. It’s the reverse of firing the imagination and potential of writers.’ – Shortlist

Write what you know, but learn new things.

Fiction thrives thanks to intricacies, technicalities and trivia. Do you enjoy, for example, the medical puzzles in a show like House? Its writers learned new things, and wrote what they learned – but not quite just what they know.

7. Allusions Can Ruin The Message

‘I don’t like to work with literary allusions all that much.’ – Guernica Mag, Mythic Retreat Interview

Literary allusions can impair basic readability. Allusions can even make literature difficult to translate into other languages.

Aim for a high readability, especially in fiction.

I hope these bits of writing advice from Kazuo Ishiguro help you with your writing.