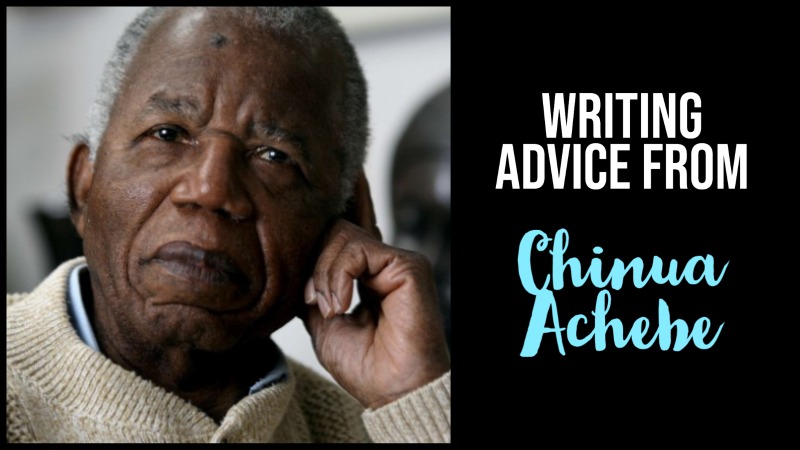 In this post, we discuss writing advice from Chinua Achebe, the Nigerian author.

Who Was Chinua Achebe?

Achebe was a Nigerian writer, poet, and lecturer. His work draws on Igbo traditions and culture. This was often combined with his own observations about life.

Things Fall Apart, his first novel, was published in 1958. Others like Arrow Of God (1964) would follow. He created a lifetime body of work.

Achebe used his writing to portray accurate Igbo culture. He did this when Western depictions of African characters were still stereotypical.

Achebe was also highly awarded for his work. He was the recipient of the 2007 Man Booker Prize.

After a car accident left him partially paralysed and confined to a wheelchair, Achebe spent his later years as a lecturer and would travel much less.

His contribution to literature is recognised each year with the Chinua Achebe Literary Festival.

‘The book is dead, long live television! One question which is not even raised let alone considered is: Who will write the drama and film scripts when the generation that can read and write has been used up?’ – Hopes And Impediments: Selected Essays

Don’t watch too much television at the detriment of reading and writing, but do try different media.

Achebe reminds writers that being creative is fluid. Emails, scripts, short stories, essays are all worthwhile expressions of the same craft.

When I watch television, it’s always something more. I pick apart the plot. I map out the characters. I list the highs-and-lows of different scenes. I don’t watch mindlessly.

2. Write For Yourself First

‘Most writers who are beginners, if they are honest with themselves, will admit that they are praying for a readership as they begin to write. But it should be the quality of the craft, not the audience, that should be the greatest motivating factor.’ – There Was a Country: A Memoir

If you imagine the market before you start your story, it can stand in the way of your ability to write it. Write a good story. Finish the book.

At the start, writers should be more concerned with what their story is going to be about. Don’t focus too much on the market. If you have an excellent story, readership can cross any boundaries.

‘If I write novels in a country in which most citizens are illiterate, who then is my community?’– Hopes And Impediments: Selected Essays

It is a writer’s job to write, but it is also their responsibility to promote literacy everywhere.

Illiteracy is a worldwide problem. It cannot be ignored, especially if you make a career from words and language.

Would you like people to read your work decades from now? Promote literacy. It helps.

‘The writer is often faced with two choices: turn away from the reality of life’s intimidating complexity, or conquer its mystery by battling with it.’ – There Was a Country: A Memoir

He goes on to say that the writer who chooses to ‘turn away’ will produce ‘elegantly tired fiction’.

What does this mean?

Don’t turn away from what Achebe calls ‘the complexities of life’. Life is hard, harsh, rough, tragic, sad, and happy all at once.

As Achebe says, choose the second option and ‘conquer’ life. It makes for better writers.

‘Writing has always been a serious business for me. I felt it was a moral obligation.’ – There Was a Country: A Memoir

Only Hollywood can turn the act of writing a book into a five-minute movie montage set to music. That’s not how being a writer works.

Achebe calls writing ‘a serious business’, and that is true.

Writing is fun, yes, but there are also hours of editing, screaming, sweating, and total isolation from friends and family.

It is also about dealing with serious subjects and moral dilemmas.

‘What really worries me is that those who are in positions of power are not really affected by what we are writing.’ – Conversations With Chinua Achebe

Achebe did not write political fiction, but fiction with political impact.

Achebe was concerned when people in power did not take note of his work.

The next time you see a weak plot or badly written prose somewhere, let it motivate you to write a great story. Write something original, and make it better.