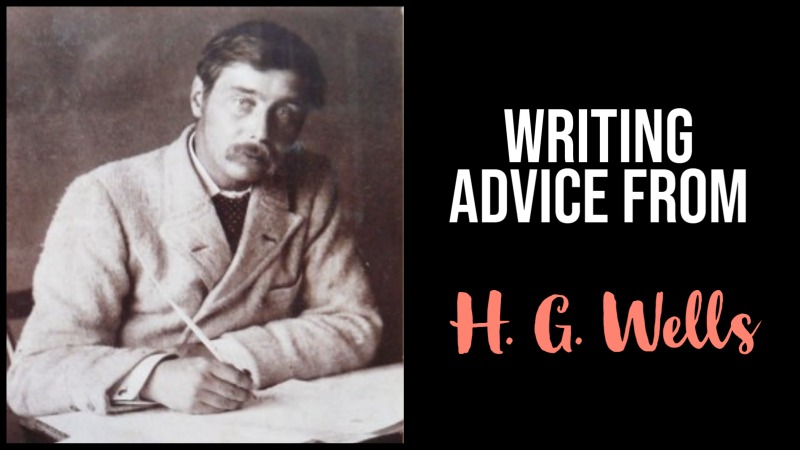 In this post, we share seven bits of writing advice from H.G. Wells, the English short story writer and novelist.

H. G. Wells is known for his romantic, futuristic approach to writing. The War of the Worlds

was adapted to a radio broadcast made so realistic that some viewers believed the world was under attack.

The War Of The Worlds was published in 1897. The story has inspired countless adaptations since. His long-form fiction continued with the publication of The Time Machine in 1895, and The Invisible Man

Wells pioneered the science fiction genre along with other writers like Jules Verne.

Wells served as the co-founder of The Diabetic Association (Diabetes UK). He was also a lifelong war game enthusiast, and wrote two books on war game strategy.

Here’s what writers can learn from the master of war games and fiction, H.G. Wells.

‘If you are in difficulties with a book, try the element of surprise: attack it at an hour when it isn’t expecting it.’ ~Love and Mr. Lewisham by H. G. Wells

A lot of great writers have attributed their creativity to working at strange hours. Do you prefer to stay up late to write, or do you get up early?

It’s difficult to be creative when the mind is strained or busy. Writer’s block is often times just simple stress.

Wells approached writing with the element of surprise.

If you cannot grasp an idea or plot by the horns, try doing it at a stranger time. Do your editing later.

2. Writers Write (But Edit Too)

‘No passion in the world is equal to the passion to alter someone else’s draft.’ ~Freedom Under Planning by Barbara Wootton (1945)

Writers write, but the task frequently extends to proofreading and editing.

As writers, the urge to edit is wired into your language pathways: it’s normal to feel like you want to proofread everything you see.

Have you seen a spelling mistake on a menu and just want to fix it?

Even the great H. G. Wells had to admit the same urge.

Plain language gets the message across using few, simple words. The use of plain language makes reading (and even automatic AI-driven translation) of text easier.

Wells argued for the importance of writing ‘straight’ in his autobiography.

Writing straight is to describe scenes and characters without wasting the reader’s time.

Aim to describe fiction and non-fiction for the reader’s comprehensive ease first.

4. Study The Nature Of Mankind (Especially In Darkness)

‘Man is an imperfect animal, and never quite trustworthy in the dark.’ ~The Open Conspiracy: What Are We to Do with Our Lives? by H. G. Wells (1928)

Psychological studies have shown that individuals are less likely to indulge in activities like stealing when subjected to better lighting. Dim light means an increased chance of in-store stealing.

It says a lot about human nature, and what people are capable of when they assume nobody looks. Writers should make studies of human nature to create better, logical characters.

The method helped H.G. Wells to style many of his intricate character developments.

5. Don’t Lose Yourself In Planning

‘An artist who theorizes about his work is no longer artist, but critic.’ ~The Temptation of Harringay by H. G. Wells (1895)

It’s a lot of fun to think and talk about writing. Discussions about writing can run into hours’ worth of talking (with no actual writing having taken place).

6. The ‘Tortured Artist’ Idea Has To Die

‘I had rather be called a journalist than an artist.’ – HG Wells In A Letter To Henry James

The idea of being a ‘tortured artist’ is one that damages people, and wrecks lives.

There is no need to push for emotional trauma to see what it feels like and subsequently write it down.

That is why Wells preferred to be called a serious writer or journalist instead.

7. Writing Is About Statistics Too

‘Statistical thinking will one day be as necessary for efficient citizenship as the ability to read and write.’ ~H. G. Wells Quoted In Mankind In The Making

Writing well isn’t just about writing in the age of internet and search engines.

Wells saw far enough into the future to make this accurate prediction long before its time. His specialty was futuristic writing, was it not?

H. G. Wells’ writing is still popular today when it’s read in the futuristic age he envisioned. He was no fortune teller, but a great writer and analyst of human behaviour.

Plain language writing helped his work to be highly adaptable and translatable.

I hope these bits of writing advice from H. G. Wells will help your writing.