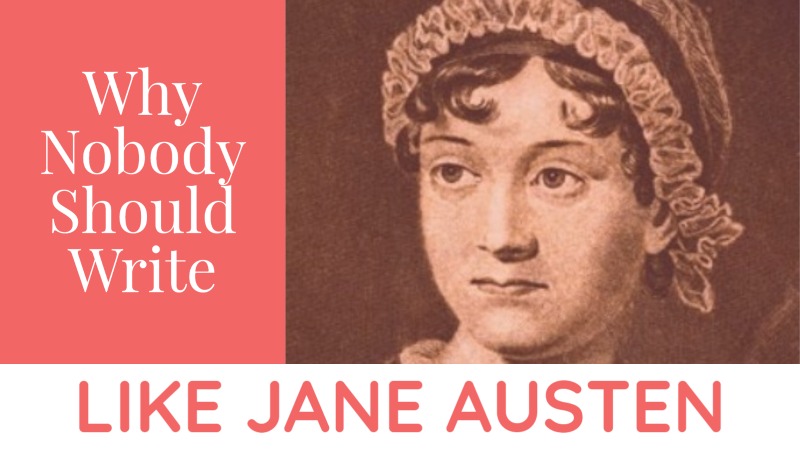 In this post, we look at Jane Austen’s writing, and tell you why nobody should write like Jane Austen today.

Jane Austen was born 16 December 1775 and died 18 July 1817. Her novels include Pride and Prejudice, Emma, and Mansfield Park. We are sharing this post to celebrate the anniversary of her birthday.

Jane Austen is one of the world’s most acclaimed authors of fiction. Her works have been read by millions, and turned into adaptations for film and television.

‘How to write like Jane Austen’ is one of the most common questions writers Google.

She’s an inspiration to many writers. This doesn’t mean that anyone should aspire to write Austen.

While her writing and its themes of love, class, gender, morality, friendship, pride, and prejudice are still relevant – and should be explored, a great deal of things found in it have been lost to time.

Here’s a brief look at Jane Austen’s life. Then we’ll explore why elements from Jane’s writing might have changed for today’s writer and reader.

A Look At Austen’s Life, Briefly

Austen read, performed, and wrote throughout her life. Her writing was well-received, and it was encouraged by family members who urged her to see the manuscripts to publication.

Today, she’s well-known. Even people who have never read an Austen novel know at least one title.

During her lifetime, things were different.

All her novels were published anonymously, and she never saw her own by-line.

Austen’s work was also ripped off into inaccurate French without her knowledge. She is said to have written more than 3, 000 letters, but few survived after her death.

A writer shouldn’t draw too much inspiration from other writers – or the times they might have lived in. (Unless you are specifically writing a book set in that era. Even then, you need to write in your own voice – not copy someone else.)

Here’s why Jane Austen’s time, setting, and style shouldn’t be copied verbatim by anyone in more modern times.

‘Ah, the peace has come too soon for that younker!’

The above line appears in the novel Persuasion.

Can you guess what perturbation means? How about panegyric? Austen’s writing is filled with words that were fine for the time, but which make less sense now.

It’s never a good idea to slow readers or editors down with words they’ll be forced to look up in a dictionary.

Modern writers who rely on archaic word usage aren’t being clever. They’re unintentionally angling their writing over the reader’s head.

2. Readability (That Would Get SEO Downranked Today)

When reading her work with a historical perspective, Austen wrote excellent dialogue. Just like your average Shakespeare novel, people don’t speak or think in the same manner today.

Many writers from this time wrote in long sentences, filled with commas and semi-colons. This style does not work well today.

If you wrote an entire blog post in the same style, readers will run. Even search engines won’t like it.

Readability and grammar have changed.

If you don’t believe me, run a paragraph from Jane Austen’s work through an SEO (search engine optimisation) checking tool for readability. Have fun.

3. Societal Parodies (That Can’t Be Transposed To Today)

Jane Austen wrote a lot of work as a parody of modern society.

While many societal themes still exist today, they are presented in a completely different manner in modern novels. The flaw in trying to imitate her style is that it was set in a society in the 1800s.

It was way before we knew what a compact disk was going to be. Let alone Bluetooth, streaming, smartphones, McDonald’s… You get the point.

Are you accidentally sending the reader through a time machine by setting a novel in 2021, but with irrelevant issues from the 1800s woven in?

4. Characters (That Appear Out Of Place Today)

Reading too much into historical fiction gets your writing gears jammed in the wrong era. Without meaning to, the writer starts to borrow little bits and bobs from Darcy (and others) until you’re cutting someone else’s characters out of cardboard.

Characters can accidentally appear with traits from different times within your story if you don’t.

You can do it well if you work at it and if you mean to retell the tale in a modern setting. Mr Darcy in Bridget Jones’s Diary was updated effectively for modern times. [Read: 10 Tips For Retelling A Classic Tale]

Austen’s work has been analysed to death by other writers, many readers, and a fair amount of statisticians and computer scientists. Artificial Intelligence has even had a go at it.

Here are the top 400 words in Pride & Prejudice by frequency. Words like ‘such’, ‘dear’, and ‘lady’ are high-ranked, for example..

When looking at Jane Austen’s work too often, even accidentally trying to copy her style may backfire on the writer. If you read enough Jane Austen novels in a row, it’s guaranteed to affect your own work.

It’s when writers start using common words or phrases from their favourite writers too much.

Avoid this by taking a break and reading other things. It’s the only way.

Austen’s idea of romance was written for the time. While it was revolutionary, things have changed drastically today. Are plots as romantic or characters’ inactions as staid as they were when they were written?

Today, a series like You, Me, Her introduces a throuple as a romantic concept. Today, we have things like Tinder and Grinder. We have apps. We talk about things like asexuality, and many more elements earlier writers did not. Diversity is important in modern stories.

Modern times can’t rely too heavily on earlier issues. Unless you’re writing historical fiction, even sexuality or romance from the time doesn’t necessarily translate well to your modern story.

Jane Austen’s work has sold well as period fiction, not as modern work. I hope these reasons why nobody should write like Jane Austen TODAY will help you when you write your stories.