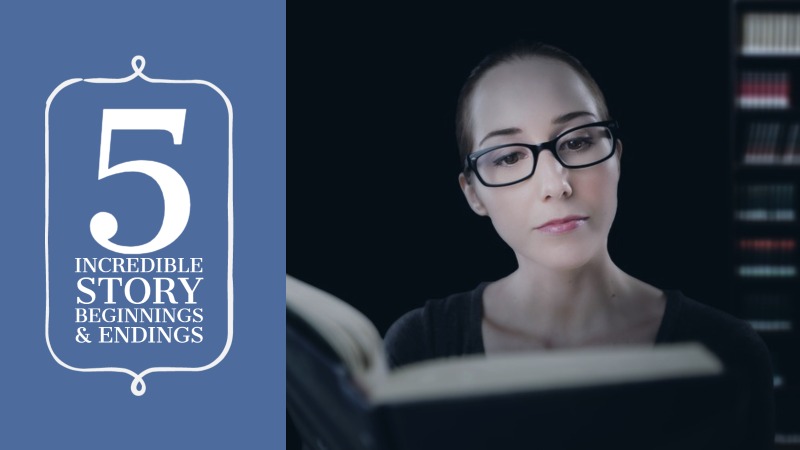 In this post, we look at five incredible story beginnings & endings.

Stories can be hard to begin. Fiction can be just as hard to close.

First (and last) paragraphs stay with readers the longest. When editors judge, the way you start or end will matter.

Here are five incredible story beginnings and endings – and why they got it right. [Alert! Spoilers Ahead]

1.A Clockwork Orange by Anthony Burgess

”What’s it going to be then, eh?’ There was me, that is Alex, and my three droogs, that is Pete, Georgie, and Dim. Dim being really dim, and we sat in the Korova Milkbar making up our rassoodocks what to do with the evening, a flip dark chill winter bastard though dry.’

Paragraph one introduces Alex, Pete, Georgie, and Dim – the droogs. The same sentence also shows us Nadsat, the language of A Clockwork Orange.

Beginnings can put a reader right in the story.

It’s unfamiliar – at first… But soon, the reader sees it unfold. By then, you’re hooked on the story.

‘I am an invisible man.’

Invisible Man starts with an impossible statement: it can’t be!

This is what makes you keep reading, isn’t it? You keep at this story because you want to know what else there is to it.

Why is he an invisible man?

Immediately, the reader has questions, and you’ve hooked one more.

Simple statements can be very effective.

3. The Catcher in the Rye by J.D. Salinger

‘If you really want to hear about it, the first thing you’ll probably want to know is where I was born, and what my lousy childhood was like, and how my parents were occupied and all before they had me, and all that David Copperfield kind of crap, but I don’t feel like going into it, if you want to know the truth.’

When Catcher begins, the character’s voice is clear. The narrative is established.

He doesn’t give a damn, and he does things in his way.

The start is a good place for this. In a few sentences, tell us who we’re reading about.

‘He was an old man who fished alone in a skiff in the Gulf Stream and he had gone eighty-four days now without taking a fish.’

In Stephen King’s UR, the character mentions how fast he can recognize short, punchy, Hemingway sentences. Can you, too, see it here?

Hemingway was to the point. No flair, no nonsense, this is what you get with words on paper.

‘It was a pleasure to burn.’

Fahrenheit 451 begins with a dark statement. A narrative is there with just a sentence.

It also sets the tone: not something you’d want to hear from a firefighter, but here you are.

1. The Landlady by Roald Dahl

”’Come over here now and sit next to me and warm yourself in front of this lovely fire. Come on. Your tea’s all ready for you.” She patted the empty place beside her on the sofa, and she sat there smiling at Billy and waiting for him to come over.”

The Landlady, a short story, gets you in all the right ways.

Atmosphere builds from the moment Billy enters the home. Something isn’t right, he thinks, but puts it down to oddity.

The tale draws readers in, and reveals itself in little pieces.

By the time readers are at its end, it’s too late for Billy.

‘When, when they’re exhausted, the men and woman go to church. And they get married. Being tired isn’t the same as being rich, but most times it’s close enough.’

Fight Club introduces a regular Joe, then throws him with obstacles.

The book is fast-paced, rough, and action-filled. Its writing is almost chaotic, with the narrative more (and more) out of control as the main character loses his grip.

The end of Fight Club shows a conclusion.

A character the reader has known so well, here, reflects. Readers feel it.

‘…his fingers were picking up speed, unaware that his aching legs were in the same city but fifty blocks away, unaware that he was weeping as he wrote.’

Misery is a slow, painful take on recovery. King wrote this, and knew well what opiate withdrawal was like.

Readers join Paul through every moment. Anxiety, tension, fear, it’s all there.

But at its end, Paul is freed, and feels nothing but relief. A clear finish, with no hope for a sequel.

‘Very few castaways can claim to have survived so long at sea as Mr. Patel, and none in the company of an adult Bengal tiger.’

is fiction, but philosophy too. A lot is explored in this book.

The ending is also conclusive, in a way you’d expect to see from a memoir. Would the end have made any sense if you didn’t know and feel for Mr. Patel?

If you can’t write an ending, ask characters how they feel about it!

Readers gasp, ‘How could this happen?’

In this post, I went through 5 incredible beginnings and endings. I hope it shows you how the best stories can start – or finish! Now… Write!