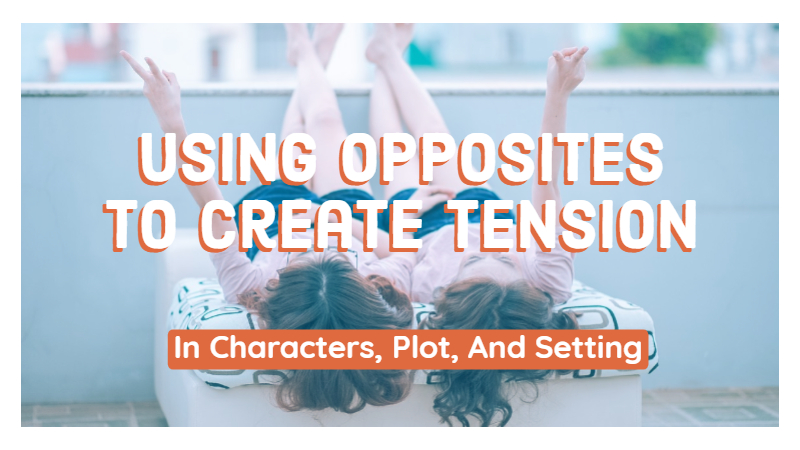 Using Opposites To Create Tension In Characters, Plot, And Setting

A good plot is sustained by a single thread: tension. You can have conflicts and resolutions across the span of the story, but tension is the rope that joins it from beginning to end.

Using Opposites To Create Tension In Characters, Plot, And Setting

One way to create tension in a story is to pit two opposite characters against each other.

However, the opposing characters can be in the same family and have different values or goals.

The world of the story, or the setting, is also an opportunity to use antithesis.

In a fantasy novel, for example, the icy wasteland of one kingdom can contrast against a bustling renaissance city in another territory and throw into relief a barbarian tribe versus a cultured society.

In a crime novel, for example, you could use opposites in all three – character, plot, and setting. What would it look like?

By using the ‘opposites’ trick, the story becomes more vivid – with deeper contrasts and richer characters.

How Does The Opposition End?

The opposition must be explored, sustained, or heightened in the story, until it comes to a climax. ‘How does it all end?’ And this is where the idea of opposites becomes interesting for you as a writer.

You can have characters switch opposites – almost like changing magnetic fields.

For example, the same sister who wanted to go to university falls pregnant and in love after a one-night stand, while her husband-seeking sister goes to college to meet the girl of her dreams.

With this approach, you can show that characters can change and change radically.

Sometimes you can have a powerful character destroy a weaker character.

For example, the industrialist bribes and blackmails his way through governments and communities and cuts down the forest, and the conservationist is disgraced.

With this approach, you show that sometimes the truth is brutal.

Of course, you can also have the conflict resolved through a new idea or character that relieves or breaks the tension you have built up in the story. This is probably the most coherent and satisfying way – for you as the writer and for your readers.

For example, the wise detective and the brash blogger work together and track down the heiress’s long-lost brother, who admits he was with her when she tripped and fell down the stairwell in the drug den. Her mysterious death was a simple accident.

With this approach, you how that something new or unexpected can come out of our set expectations as readers.

The idea of antithesis or opposites isn’t new. Writers have been using it for centuries – in the sentences, themes, and events of great books.

The truth is that if you understand the basics of this device, it becomes an easy hack for creating a tension-filled plot, compelling characters, and a brilliant ending.

Why not give it a try?

Top Tip: Use our Character Creation Kit to help you create great characters for your stories. If you’re looking for help with setting, buy our Setting Up The Setting Workbook.