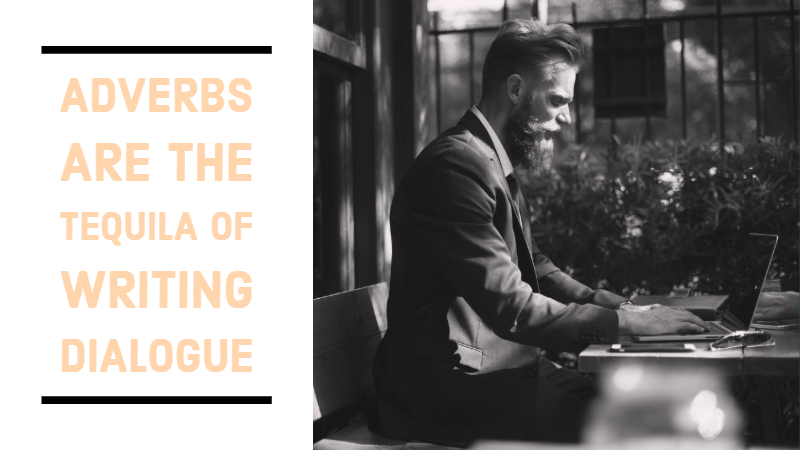 Writers Write is a resource for writers. In this post, we caution you against using too many adverbs in your dialogue.

This is the fourth step in my dialogue series, How To Write Fabulous Dialogue In 5 Easy Steps.

Today, I want to talk about adverbs and why you should try to avoid them.

Adverbs tell us how something was done. You should rather try to show us how it was done. When I talk about adverbs I want you to be pay close attention to the words that end in –ly, namely adverbs of manner. Instead of using these, I want you to try to use verbs, but not any old verb will do. I want you to use strong verbs, for example, stride instead of walk, sprint or race instead of run.

Knowing which verbs to use will be easier if you know your character well. Think of the difference between a woman who strides and a woman who shuffles. Each verb creates a different person or a different scene.

When all is said

That said I want to talk about the word said. Said is awesome. Use it. Don’t replace it with words like admonished or exclaimed. Stephen King recommends using them only 10% of the time. It’s good advice. Said is invisible to a reader.

Below is an example of dialogue with adverbs and verbs other than said. I used the prompt: ‘Keep your morals away from me’.

“Don’t do it.” Alice demanded angrily.
“Keep your morals away from me.” Janet said snidely as she stood over John, tightly tied up in the corner.
“You’ve never minded my morals before.” Alice retorted sarcastically.
“Well, I mind them now.” Janet said irritably as she steadied the gun, the weight of it uncomfortably heavy in her inexperienced hand.
“How inconvenient for you that I am here then.  Please, just drop the gun, Janet,” Alice said as seriously as possible. “We both know you are not going to shoot him.”
“I am going to shoot him. I hate him.” Janet said bitterly. Her eyes narrowed dangerously.
John whimpered through his gag and pleaded with his eyes.
“You don’t hate him, you love him. You always have.” Alice said, exasperated.
“No, you are wrong. I used to love him.” She said as she squeezed the trigger.

I have removed adverbs and added action to show, instead of tell.

“Don’t do it.” Alice grabbed Janet’s arm.
“Keep your morals away from me.” Janet pulled away and stood in front of him, trussed up and pathetic in the corner.  She steadied the gun, the weight of it uncomfortable and heavy in her inexperienced hand.
“You’ve never minded my morals before.” Alice said, folding her arms.
“Well, I mind them now.” Janet said, as she levelled the weapon.
“How inconvenient for you that I am here then. Just, drop the gun,” Alice stood in front of Janet and took a step closer so that the gun pressed against her breastbone. “We both know you are not going to shoot him.”
“I am going to shoot him. I hate him.”  They watched him squirm. He whimpered through his gag.
“You don’t hate him, you love him. You always have.”
Alice shoved Janet out the way. “No, you are wrong. I used to love him,” she said as she stepped over her sister. She smiled as she squeezed the trigger.

Using action makes the story immediate. It also stops you from creating unwieldly words that your reader will have to reread. Look at your last piece of dialogue and try using an action instead of an adverb.