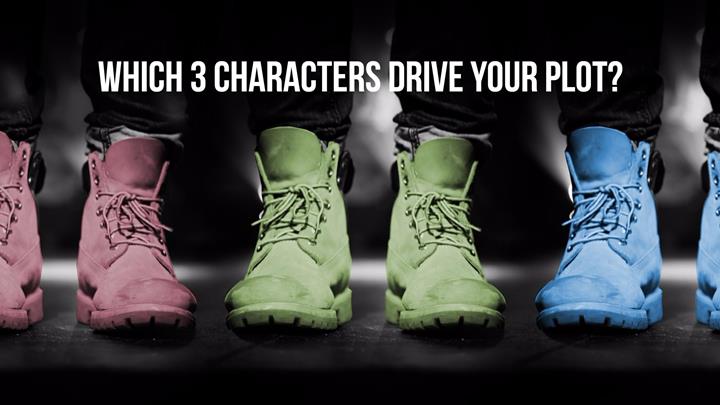 Who is responsible for moving the story along in your books? In this post, we write about the three characters driving your plot.

Sometimes deciding what role a character is going to play in your story is tricky.  If you want to cut through the confusing labels used for characters, try this simple method: focus only on three biggest characters in your story and rank them in starring order.

So …where’s the antagonist?

While all stories have an antagonist or bad guy, you may not always have a neatly formed character that plays this role – or you may want to keep him hidden from the reader and your main character.

For example: Say you want to keep the identity of the shadowy leader of a terrorist group until the last pages, you could have a skilled assassin or bomber doing his bidding in the role of C#2 and we follow his story as a major part of the story.

For example: Say your main character is up for a promotion at work — and so is his friend and co-worker. The two are competing, but the co-worker doesn’t hate his friend or want to destroy him like a classic villain would want to.  He’d simply be C#2.

C#3 is a character you can have great fun with — because they’re a little further in the background, they can deliver the greatest surprises.

For example: Say you have a main character who is a criminal underworld, but he loves fishing in the country. He forms a friendship with an older man who also loves fishing. At the end of the story, it turns out the older man is an undercover cop who has tricked him into revealing his confidences.

For example:  Say your main character is a married man who is having an affair. His mistress is the only one he can be open with, talk to, and be himself. She may be C#3 and we he decides to leave his wife for her, she turns around and says she doesn’t want a husband. She can surprise him by showing him the decisions he’s made have consequences.