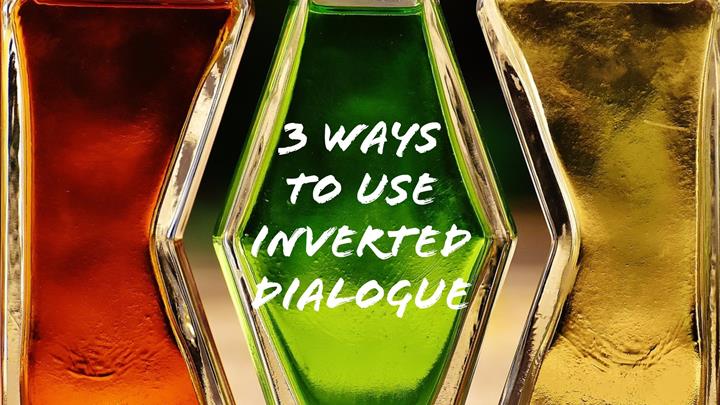 3 Ways To Use Inverted Dialogue In Your Story

In this post, we discuss three ways to use inverted dialogue in your story.

Often in a book or screenplay, you’ll find a line or two of dialogue from early on in the story that’s repeated by the same character —or a different character— near the end of the story.

Sometimes, it’s a phrase used throughout the story.

But the dialogue now has a changed or different meaning for the character or the audience. This is inverted dialogue.

This line of dialogue often contains the essence of the theme of a story. Theme, as always, is an expression of truth, even if it’s a truth unobtrusively hidden in the words the characters say.

Let’s look at three basic scenarios to see how you could use this line to great effect in your story.

3 Ways To Use Inverted Dialogue In Your Story

Davy, a struggling, sexy young stand-up comedian, always practises his routine on his girlfriend, Kristi. She’s his best critic and supporter and will tell him when a joke is flat, ‘I’ve heard funnier, Dee.’

When Davy becomes famous and has his own hit TV show, he starts to sleep with his busty agent and every groupie. Kristi eventually has enough and is packing to leave. Frightened that he’ll lose her, Davy tells her he loves her. She looks at him and says, ‘I’ve heard funnier, David.’ And walks out for good.

Kristi’s line reminds us that she’s heard all his lines and her pain is no laughing matter.

Jack, a spy training a new recruit called Kyle, teaches him the basics of counter-intelligence and social engineering: ‘Never underestimate how stupid or how helpful people can be.’

At the tense climax, Kyle has turned into a double agent and has betrayed his mentor. As he holds a gun to Jack’s head, he reminds him: ‘Never underestimate how stupid or helpful people can be, right Jack?’

Jack’s words have been turned on him.

3. Trapped in a stasis

Miriam, a downtrodden young woman, longs for freedom from her controlling invalid mother, but is too scared to seek her independence.  When her mother taunts her to leave the house, Miriam says: ‘It’s really not a great day out. Why don’t I make us some tea?’

After her mother dies, a social worker asks Miriam to come down to a bingo evening at the community centre. Miriam hesitates —there’s nothing to keep her in the house anymore — but smiles at the social worker and says: ‘It’s not really a great day out. Why don’t I make us some tea?’

Miriam’s favourite excuse at the end reminds us that she’ll always be trapped by her fear.

Try to find the line of truth in your story that resonates with your theme and see if you can use it as inverted dialogue — it really can pack an emotional punch.