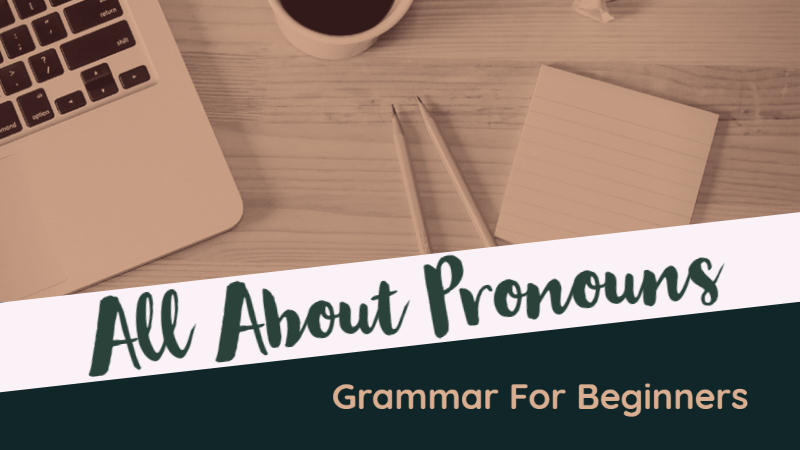 We continue our parts of speech series by writing all about pronouns.

What are parts of speech?

We discussed pronouns when we wrote about nouns, but we will go into more depth in today’s post.

‘Pronouns are used in place of a noun that has already been mentioned or that is already known, often to avoid repeating the noun.’ Source: Oxford Dictionaries

Personal pronouns are used in place of nouns referring to specific people or things.

We divide them into different categories according to their role in a sentence, as follows:

The personal pronouns I, you, we, he, she, it, and they are called subjective pronouns. We use these when the pronoun is the subject of the sentence.

We should also use them if they rename the subject. They follow ‘to be’ verbs like: is, are, was, were, am, will be, had been

(Please note that it is accepted in informal English that most people follow ‘to be’ verbs with object pronouns like me, her, them. For example: ‘It is me.’ should actually be written as ‘ It is I.’)

Tip: When ‘who’ refers to a subjective pronoun (I, you, he, she, we, they), it takes the verb that agrees with that pronoun.

Suggested reading: Between you and me

The personal pronouns mine, yours, hers, his, ours, and theirs are known as possessive pronouns. They are used to refer to something owned by the speaker or by someone or something previously mentioned. Tip: They never need apostrophes. Avoid mistakes like their’s and her’s.

Pronouns that end in -self or -selves are called reflexive pronouns. There are nine of them: myself, yourself, himself, herself, itself, oneself, ourselves, yourselves, and themselves.

We use reflexive pronouns when both the subject and the object of a verb are the same person or thing. Without them, we would have to write nonsense sentences like ‘Sarah hated Sarah’ instead of ‘Sarah hated herself’.

Intensive pronouns take the same forms as reflexive pronouns but are used to emphasise a noun or pronoun.

According to Dictionary.com this could be:

A list, for example, in close proximity to (either before or after) “these” or “those” would be clear enough.

“Raindrops on roses and whiskers on kittens, bright copper kettles and warm woollen mittens, brown paper packages tied up with strings – these are a few of my favourite things.”

Or you could refer to a description of an object, activity or situation as “this” or “that” if you do so immediately following the description.

They make you wear rented shoes, you always smell bad when you leave, my thumb nail always breaks off, and I’m not good at it. That is why I hate bowling.

Here are a few more examples: We use interrogative pronouns to ask questions.

An indefinite pronoun is one that doesn’t refer to a specific person or thing. It takes the place of a noun, but not a particular noun. Examples: all, another, any, anybody/anyone, anything, each, everybody/everyone, everything, few, many, nobody, none, one, several, some, somebody/someone, everywhere, nowhere.

Tip: Many indefinite pronouns can also be used as adjectives.

Good luck with your pronouns!