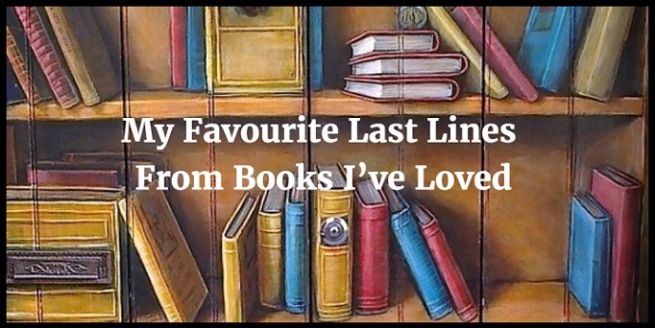 They say the ending of a book makes you buy another of the author’s books – if it’s any good. What are your favourite last lines from books you’ve read?

Are there any questions?
~Margaret Atwood, The Handmaid’s Tale

You will have to learn everything all over again.
~Jay McInerney, Bright Lights, Big City (1984)

The old man was dreaming about the lions.
~Ernest Hemingway, The Old Man And The Sea

No matter where I went, my compass pointed west. I would always know what time it was in California.
~Janet Fitch, White Oleander

‘Hello?’
He heard the other receiver being dropped into its cradle, then the hum of the open line. He stood for a moment, then replaced the receiver and walked into the kitchen, pulled open the cupboard and lifted out the newspaper and cuttings. Dumped the whole lot of them into the bin. Grabbed his jacket and took that walk.
~Ian Rankin, Black and Blue (1997)

Mist swirled and smoked, rose from a pool of such clarity that she looked as if she were swimming in air.
~Nicholas Hogg, The Hummingbird & The Bear (2011)

So we beat on, boats against the current, borne back ceaselessly into the past.
~F. Scott Fitzgerald, The Great Gatsby

These were history’s gifts to my family – and if the resources of that grocer, the fruits of those riots, the possibilities of that culture, and the privileges of that skin tone had extended to others, how many more would now live a life of fulfilment, in a beautiful house high on a hill?
~Malcolm Gladwell, Outliers (2008)

It is not often that someone comes along who is a true friend and a good writer. Charlotte was both.
~E.B. White, Charlotte’s Web, (1952)

This is not an exit.
~Bret Easton Ellis, American Psycho

“All that is very well,” answered Candide, “but let us cultivate our garden.”
~Voltaire, Candide

But I can rest only for a moment, for with freedom come responsibilities, and I dare not linger, for my long walk is not yet ended.
~Nelson Mandela, Long Walk to Freedom (1994)

Writing is magic, as much the water of life as any other creative art. The water is free. So drink.
Drink and be filled up.
~Stephen King, On Writing

Write about promises broken.
Write about the last light of day.
Write about a secret collection.
Write what whispers your name in the night.
Notes drawn from the river
Write about a whole life of madness
This is where I’ve been
~Judy Reeves, A Writer’s Book of Days