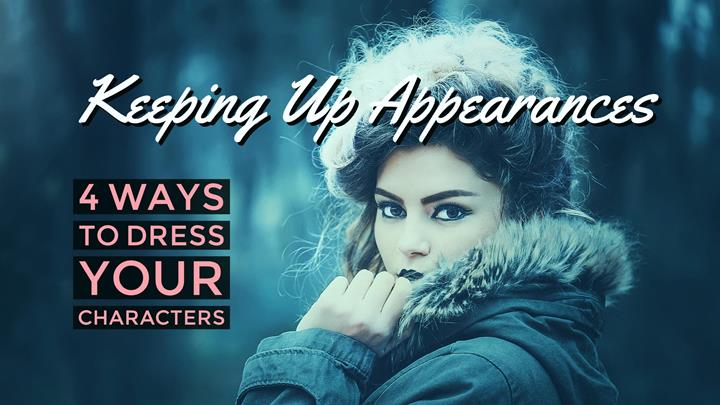 Keeping Up Appearances – 4 Ways To Dress Your Characters

Writers Write is a comprehensive writing resource. In this post, we discuss 4 ways to dress your characters when you write a book.

Playing dress-up with your fictional creations

It goes without saying that you should pay attention to crafting the perfect characters for your book—you must know what they want, need, fear. These internal psychological factors are important, but don’t forget outward appearances.

How your character dresses says a lot about them. Obviously some genres, such as glitzy women’s fiction and romance, demand we pay more attention to appearance, but most readers of any genre want to know what the characters look like and what they’re wearing.

4 Ways To Dress Your Characters

Here are four ways to dress your characters:

If your character is an enigmatic and moody person, it might be a good idea to dress them in darker colours so that it reflects their emotional make-up. If they are a hopeful and sincere character, you could give them lighter hair and an airier sense of dress. This may be playing into stereotypes but it works well as a visual shorthand, and, if done in a subtle way, can add texture to your character. Of course, you could play against type. You could have the villain wear slacks from Woolworths and a middle-class haircut. The heroine in her Goth get-up and tattoos is actually a forensic specialist.

When thinking about your character, think about a specific item that will make him or her stand out as an individual. It could be a grandmother’s cameo brooch the heroine always wears to a job interview or an elegant cane the detective is never without—think of a small touch that will make that character unique.

Where we live, how we grew up, our culture—all these may influence the way a character dresses. A businessman on an island may go into the boardroom in shorts. A celebrity may spend hours putting together her hobo-chic look before she steps out to casually buy a paper and ensnare the paparazzi.

For me, I love the idea of characters in contrast, especially in the way they dress. The bride in her exquisite wedding dress wearing curlers and fluffy rabbit slippers as she has her make-up finishes. The ancient priest who wears the latest trainers and loves his iPod. Try to give the readers something unexpected—something that will make the picture of the character that much more vivid in the imagination.