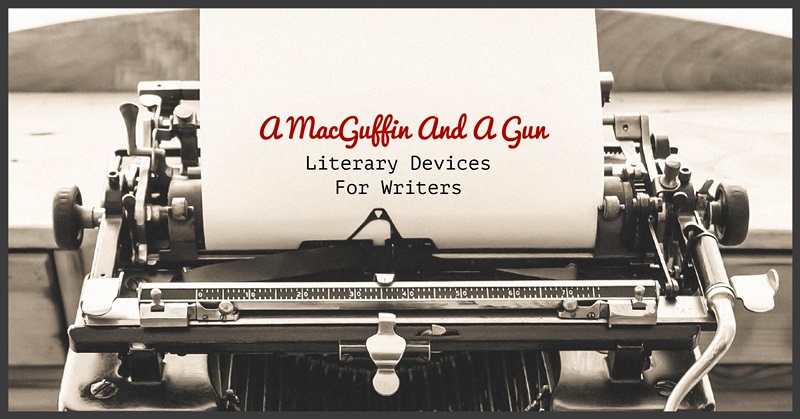 Writers Write creates writing resources and shares writing tips. In this post, we discuss two literary devices for writers – a MacGuffin and a Gun.

Here are two literary devices you could use when plotting your next suspense novel, detective story, crime caper, or mystery thriller. From two masters of the craft, these two strategies can help strengthen your storyline.

Literary Devices For Writers – A MacGuffin And A Gun

Alfred Hitchcock gives us the MacGuffin. The MacGuffin is an object, event, or character that seems to be the central focus of the plot at the start of the story but, ultimately, proves to be unimportant. An heiress’s jewels are stolen, but the real plot is the detective’s desire for her despite her dark past. A driver must deliver a package cross country, but what is in the package is not important. Mysterious lights are seen over a rural sky the night a boy goes missing, but the story is not about evidence of UFOs but about a community coming together after a tragedy

Anton Chekhov gives us the Gun. Chekhov’s Gun is the opposite of the MacGuffin. In this story-telling device, the writer unobtrusively introduces an object early on in the story—but its significance does not become clear until much later, usually in the climax. The treasured penknife the widow finds in her husband’s desk is used to help free her from a kidnapper’s ropes. The plastic toy the hero’s child gets with his take-away meal is tested to prove a plastic company is poisoning the environment. [Suggested reading:  How Chekhov’s Gun Can Help You With Description]

The two devices work at opposite ends of the plot scale. In the first, you deliberately mislead the reader by using something showy and intriguing to get the story started. In the second, you carefully plant a clue that will become important at the end of the story.

You can, of course, use these devices in any genre.