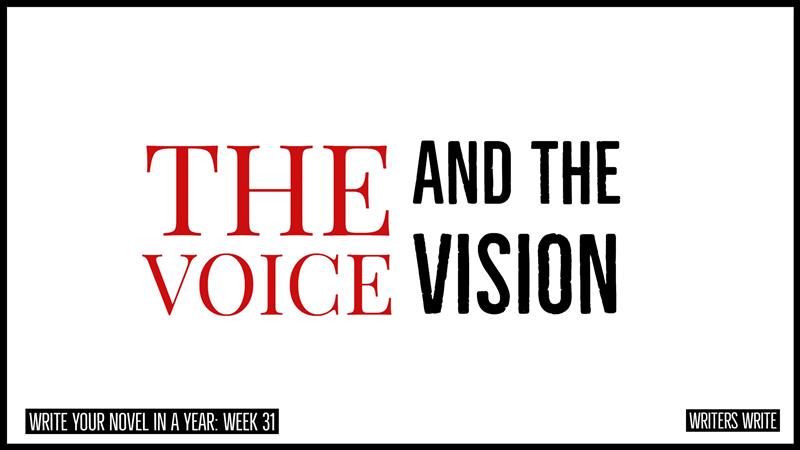 Writers Write creates writing resources. In this post, we suggest ways to find your voice and vision as an author of novels.

Welcome to week 31 of Anthony’s series that aims to help you write a novel in a year. Read last week’s post here.

In his unique and powerful book, What A Writer Needs, Ralph Fletcher talks about ‘stalking’ or ‘wire-tapping’ your inner voice as a writer, and how to keep that voice intact in your manuscript.

If you don’t have confidence in the rhythm of your own voice as a writer, you won’t find it for your character.

One way to do it, he suggests, is to keep a journal or a writer’s notebook as a ‘jumpstart’. I find this method works for me too – a way to figure out what’s in my mind as a writer, to find out how I want to use my characters to say something about the theme I’ve chosen, and to play with language.

This is almost a ‘pre-draft’ method. To write freely and fluidly without worrying about if the writing fits in with the actual plot of the story. In short, it’s a chance to write badly for a single private audience: you. Free-writing exercises are a great way to unleash your voice.

Yesterday I finished Gore Vidal’s Myra Breckinridge, a very funny, bizarre, acerbic, and gender-bending book. It’s kind of a literary version of The Rocky Horror Picture Show – and just as much fun.

The voice of Myra as the narrator is probably one of the book’s strengths. It is a superb example of unreliable narration.

She is writing in her notebook about her adventures in Hollywood and her desire to conquer the town and just about every man and woman in it. Her voice is grandiose if delusional, eloquent, and addictive.

She’s obviously crazy – but we can’t stop reading because we want to find out just how crazy she can be!

To contrast her voice, Vidal uses a second narrative device. In between Myra’s chapters, we have the notes her rival, Buck Loner, dictates onto a tape recording – an unedited rush of words that we imagine some faceless secretary will later transcribe.  This was an unusual form factor but it worked well.

This second voice is a great counterpoint to Myra’s voice. We need this second viewpoint to test and gauge if what Myra has told us is true or not. It also adds a great sense of dramatic irony – Myra believes she is succeeding in overtaking Buck’s acting academy, but Buck is often one step ahead of her.

Most of us have a vision for our novel. For my novel, I often see it play out in my mind’s eye: the restless sea scarfing the rocks out at the beach house, my antagonist’s grey eyes in the shadowy pillar box of his motorcycle helmet, the lights of a restaurant balcony in the overcast winter light of Cape Town.

I can also hear my story: Jenna’s rich husky voice, a motorbike’s tyres cutting through the rain on a wet road, the brassy throb of a saxophone in a jazz club.  For me, the story really comes alive when I filter it through the senses.

Vision, if we think about it, is really a creative strategy. How will you move the reader’s imagination? What are the sensations you wish to invoke? Is it fear, excitement, laughter, and so forth?

The challenge is to use your voice – your narrators, your viewpoint – to create this vision in the reader’s mind. The more vivid, striking, and engrossing you can make it, the more you’ll have them hooked from page one!

‘When I talk about voice, I mean written words that carry with them the sense that someone has actually written them. Not a committee, not a computer: a single human being.’ — Ralph Fletcher

Explore: Anthony Ehlers, Viewpoint, Write Your Novel In A Year