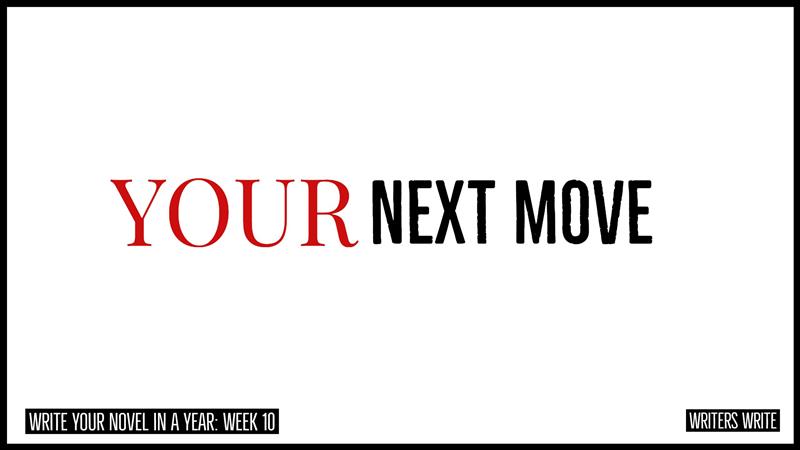 Writers Write creates writing resources. This post is about making your next move in your novel by continuing to plan scenes, sequences, and chapters.

Welcome to week 10 of Anthony Ehlers’s series that aims to help you write a novel in a year. Read last week’s post here.

One goal after another

The goal is to finish our novel in a year. It’s what keeps us going. But, as I’ve found, a novel is sometimes like Alice dropping down the rabbit hole: it’s easy to get lost. Confused.

Just to be writing, putting one word after another, isn’t enough. We must see the next step. We must have something to look forward to. The idea of finishing the novel must be exciting, and create a sense of anticipation. And while we must have the next step in mind, so must our characters. They must also be moving forward: achieving one goal, setting a new goal, battling the obstacles.

This week wasn’t a great one for me: battling a bad chest infection, moving house – it just seemed like one blur. I couldn’t see the next step clearly in my life, my career and, to be honest, I didn’t even think about my novel. I wasn’t paying attention. My life was reduced to unpacked boxes, mild panic, and antibiotics.

Then, this morning, driving to work before the sun came up, I saw the city lit up in the distance, the headlights of the cars on the highway. And I realised that everyone had ‘somewhere to be’ — they were going places.

Where are you going as a writer? Where are your characters going? Take a few minutes today — right now, in fact — to decide what the next step is in your story. Write it down. Be clear about what you need to do today.

I just finished Nora Roberts’s entertaining romantic suspense novel, The Collector.  Her books are always page-turners and, while reflecting on it, I realised that she creates a great ‘flow’ in her novels — you never see the seams, she carries the reader from scene to scene.

Last week we spoke about summarising each scene or chapter in your novel. We will continue with these summaries this week. But if you’re struggling to do this, or if it seems a bit ‘choppy’ or staccato, try to think of a sequence (sequel).

A sequence is a grouping of scenes between your bigger plot points. You can plan a sequence according to a setting, period of time, character, or theme.  Often a sequence has to answer a plot question.

For example, in The Collector, Lila, the main character, witnesses a shocking murder in the first chapter. It’s a great hook. Soon after, Lila meets Ashton, the victim’s brother, and decides to help him discover why his brother was murdered. This question — Why was his brother killed? — makes up one of her earlier sequences. The sequence ends when she and Ashton find a safety deposit box containing the first major clue to a possible motive for the killing.

And just as each scene has a beginning, middle, and end — so does a sequence.  In The Collector, the beginning is when Ash convinces Lila that his brother died because of a bad business deal. The middle is when Ash discovers a letter his brother sent him. The end is when Ash reveals to Lila the contents of the safety deposit box.

Persistent vision is an image that stays imprinted on your mind for a while after it’s no longer there. Have you ever read a book or seen a movie and an image or two stays in your mind long after you’ve finished it? What made that image or those moments stand out for you? How can you recreate the same for your own novel?

I’m reading Just Jackie, Edward Stein’s biography on Jackie Kennedy Onassis. To show the grief and devastation of her family, Stein creates some vivid scenes that rouse emotions without mawkish sentimentalism. A few days after the funeral of JFK, Jackie comes down to breakfast at their beach home. The table is set for three rather than four. She looks out the window and sees her young daughter sitting alone on a sand dune, looking out at the colourless horizon of the bleak cold day. She remembers the innocent game her husband used to play with her daughter — about a shark that used to eat socks.

These moments had more emotional resonance than if the author had merely told us that Jackie was sad and her children bereft. Stein, even in non-fiction, is showing not telling.

In my novel, I realised that I could use the weather, to reflect mood and emotion. I wanted to establish Monty, the young man who becomes involved with Jenna and Matt, as young, vulnerable, innocent: so I created a small scene: he is naked, drinking milk in their moon-blanched kitchen.

In another scene, Jenna, my main character, looks out at a mist-shrouded Table Mountain the morning after their encounter with Monty — which could highlight her sense of confusion. Sometimes when you find those ‘visual moments’ — you get to understand your characters, and your story, better.