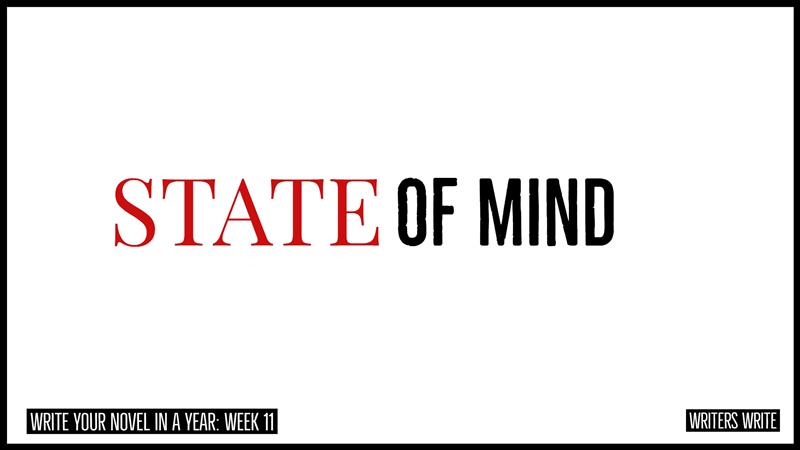 Writers Write creates writing resources. This post is about making sure you understand your character’s state of mind when you write your novel.

Welcome to week 11 of Anthony Ehlers’s series that aims to help you write a novel in a year. Read last week’s post here.

One thing to remember as you outline your scenes is your characters’ emotions. Both positive and negative.

Their state of mind is very important. It will often affect or influence their behaviour, reactions, and decisions during the course in the novel. Is your character angry or resentful? Jealous? Confused? How will they deal with these emotions in your story? The stronger the emotion, the more realistic and empathetic your characters will become on the page.

I recently watched a TV movie, Complex of Fear, about a serial rapist causing fear and distrust in a community living in an apartment building. Ray, a security officer, is determined to stop the rapist. When his wife, Michelle, reveals that she was the victim of a college date rape herself, his feelings are conflicted. Instead of this revelation bringing them closer, Ray draws further away emotionally from his wife. He becomes obsessed with apprehending the predator.

This was an example of strong storytelling. It merged Ray’s external conflict in the story — finding the rapist — with his inner conflict — dealing with his wife’s secret — in a powerful way. It’s not hard to see that Ray feels powerless to change his wife’s ordeal and struggles to resolve it the only way he knows how: by catching the current rapist.

In my novel, a strong theme I see emerging is obsession. Obsession is about projecting feelings onto another person or character. This character becomes an object or mirror of the obsessed character’s emotions. When these feelings aren’t reciprocated, it leads to a sense of rejection.

Rejection, I realised, is a powerful emotion I could work into the story — and can heighten the psychological and physical suspense in the story.

It doesn’t have to be terribly ‘deep’ or symbolic. For example, in a scene from my novel, Jenna, my main character, is talking to Matt, her boyfriend, while she is working on her iPad. Matt is downloading a new app on his iPhone and answers in monosyllables. In the background, the TV is playing.

I hope that it will be clear from their distracted conversation — they don’t even make eye contact — that communication in their relationship has broken down. For a reader, the implied irony is they’re more focused on the technology in their hands than their relationship.

Also, Matt’s iPhone plays a part in the plot later on — so it’s a great way for me to slip it into the narrative as unobtrusively as possible. So, in effect, this scene is fulfilling two roles in the novel.

The great thing about having a working synopsis is that it isn’t written in stone. It should allow your story room to breathe — so you can make slight adjustments to the plot, characters, or setting as you start to plan your scenes or chapters.

As you get to know your characters — and their story — better or even new ideas may creep into your mind, usually when you’re just about to drift off to sleep, or taking a shower, or driving to the supermarket.  Listen to these ‘pops’ of inspiration. They can help your book become better.

Life doesn’t always go according to plan for anybody. So why should it for your characters?  Not that you should throw in random problems but a few little detours may add some complexity, realism, and conflict into the story.

In my original synopsis, I had Matt, one of the main characters, working at an architectural firm. While chatting to a friend on WhatsApp, he told me he was waiting to hear back on a job offer — I had no idea he’d been without work for a few months. This gave me an idea. What if Matt were looking for a job or trying to start his own business in the story? It would make him more vulnerable and add some conflict to the story.

‘Ultimately, subtext can only be suggested, not dictated. It’s where you open meaning up, rather than narrow it down.’ — Karina Wilson