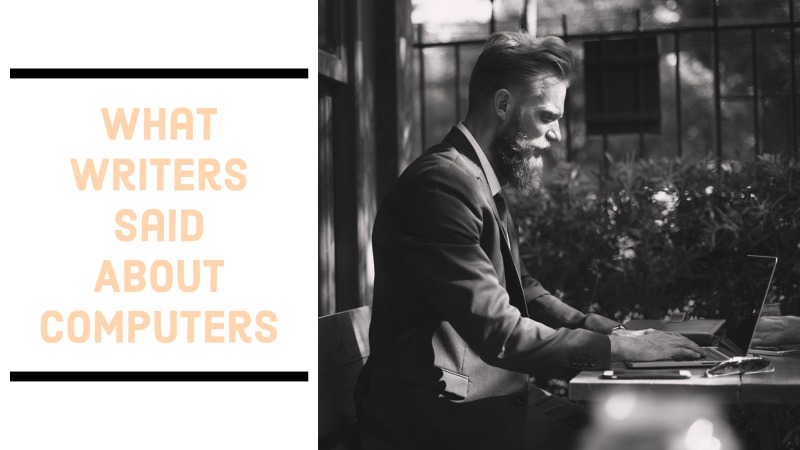 What Writers Said About Computers

In this post, Writers Write looks at what writers have said about their computers.

The PC is invaluable for writers.

We’re not in Poe’s age anymore. Quills are romantic, but rare for modern writers. Smart writers know the basics: security and software.

What did Hunter S. Thompson think of the internet? Why did Stephen Hawking call computer viruses viable life?

Here’s more about writers and what they said about their computers.

What Writers Said About Computers

‘The simple truth is that the Web the Internet, does one thing. It speeds up the retrieval and dissemination of information, partially eliminating such chores as going outdoors to the mailbox or the adult bookstore, or having to pick up the phone to get hold of your stockbroker or some buddies to shoot the breeze with. That one thing the Internet does, and only that. All the rest is Digibabble.’ – Tom Wolfe, Hooking Up

With Facebook and TikTok, it’s easy to forget that writers write. Don’t. Disconnect to the internet once in a while, take a breath, and write.

‘I think computer viruses should count as life. I think it says something about human nature          that the only form of life we have created so far is purely destructive. We’ve created life in our own image.’ – Stephen Hawking, The Independent

Hawking called the PC virus a form of life.

A virus evolves, takes over, and cripples its host.

Modern writers should always keep security up to scratch. Backup, and secure.

‘I actually have two computers,’ George R. R. Martin told Conan O’Brien. ‘I have a computer I browse the Internet with and I get my email on, and I do my taxes on. And then I have my writing computer, which is a DOS machine, not connected to the Internet. I use WordStar 4.0 as my word processing system.’

A separate PC is for the internet.

This technique is his way to have access to less distraction. While it’s drastic to some, it might be the perfect way to focus.

Don’t imagine Microsoft Word is the only good program there is.

‘I do not fear computers. I fear lack of them.’ – Isaac Asimov

Isaac Asimov told us to embrace tech with this quote.

Without PCs, we lose a world of access to information. Servers run power grids, but also power individual writers.

Do you fear your PC shutting down?

Well, so did Asimov.

‘Part of the inhumanity of the computer is that, once it is competently programmed and working smoothly, it is completely honest.’ – Isaac Asimov, Change! Seventy-One Glimpses of the Future

He says that computers are programmed to be honest. A PC does what its user says, or what it’s meant to do.

Smart writers learn what they can about technology.

‘I wrote first 2 Potters by hand and typed them on a 10 yr old typewriter. All a writer needs is talent and ink.’ @jk_rowling

Don’t let tech obsession stop you from writing, however.

When asked how a writer can get started sans a MacBook, she dug into her own process. It’s not about what you use to write it, but about what’s being written.

A MacBook could have written this sentence, but a quill or pen also might have.

Focus on your writing, not only your gear.

‘I don’t know the percentage of the Internet that’s valid, do you? Jesus, it’s scary. I don’t surf the Internet. I did for a while. I thought I’d have a little fun and learn something. I have an e-mail address. No one knows it. But I wouldn’t check it anyway, because it’s just too [removed] much. You know, it’s the volume. The Internet is probably the first wave of people who have figured out a different way to catch up with TV — if you can’t be on TV, well at least you can reach 45 million people [on the Internet].’ – Hunter S. Thompson, The Atlantic

He saw ‘fake news’ and internet memes coming, and it was too much to take.

Approach the web with the caution of a wildfire: things can spread fast.

With this, HST emphasized the importance of facts (and checking them).

In this post, Writers Write explored plagiarism and what to do. We hope it helps you to never make this mistake!