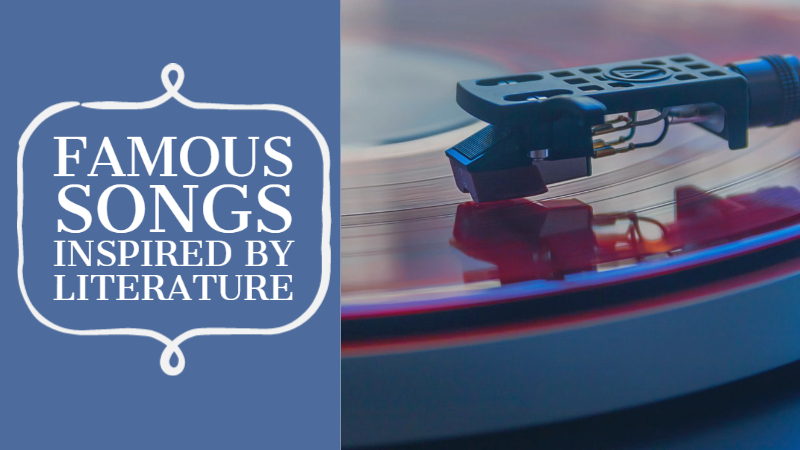 If you like music and books (and who doesn’t?), you will enjoy this post. We look at famous songs inspired by literature.

Many great lyrics have actually been inspired by works of literature. It shows you how a word, or a line from poetry, can inspire a creative work. (We recommend completing daily writing prompts for this reason. You never know what will develop from your writing practice.)

In this post, we give you a small selection of the many songs inspired by literature. If you have any to add, please share yours in the comments.

Song: ‘Lucy in the Sky with Diamonds‘ by The Beatles
Inspired by: Alice’s Adventures in Wonderland by Lewis Carroll
Popular Lyric: “Picture yourself in a boat on a river/With tangerine trees and marmalade skies/Somebody calls you, you answer quite slowly/A girl with kaleidoscope eyes.”

Song: ‘Moon Over Bourbon Street‘ by Sting
Inspired by Interview with the Vampire by Anne Rice
Popular Lyric: “Now I can never show my face at noon/And you’ll only see me walking by the light of the moon/The brim of my hat hides the eye of a beast/I’ve the face of a sinner but the hands of a priest/Oh you’ll never see my shade or hear the sound of my feet/While there’s a moon over bourbon street.”

Song: ‘Bohemian Rhapsody‘ by Queen
Inspired by: The Stranger by Albert Camus
Popular Lyric: “Mama I just killed a man, Put a gun against his head Pulled my trigger, now he’s dead. Mama, life had just begun, But now I’ve gone and thrown it all away.”

Song: ‘Goodbye Yellow Brick Road‘ by Elton John
Inspired by: The Wonderful Wizard of Oz by L. Frank Baum
Popular Lyric: ‘So goodbye yellow brick road/Where the dogs of society howl/You can’t plant me in your penthouse/I’m going back to my plough.’

Song: ‘Frankenstein’ by Iced Earth
Inspired by: Frankenstein by Mary Shelley
Popular Lyric: “The Doctor’s work is now obsession/What is life? What’s beyond?/He wants to know what it’s like to be God/Creating life with his own hands.”

Song: ‘Don’t Stand So Close to Me‘ by The Police
Inspired by: Lolita by Vladimir Nabokov
Popular Lyric: “It’s no use he sees her He starts to shake and cough Just like the old man in That book by Nabokov.”

Song: ‘Clocks‘ by Coldplay
Inspired by: William Tell by Friedrich von Schiller
Popular Lyric:  “Singin’, come out if things aren’t said  Shoot an apple off my head  And a, trouble that can’t be named  Tigers waitin’ to be tamed”

Song: ‘Catcher In The Rye‘ by Guns N’ Roses
Inspired by: The Catcher in the Rye by J.D. Salinger
Popular Lyric: “Oooh, the Catcher In The Rye Again Won’t let ya get away from him (Tomorrow never comes) It’s just another day…  Like today”

Song: ‘All Along the Watchtower‘ by Bob Dylan
Inspired by: Frankenstein by Mary Shelley
Popular Lyric: “No reason to get excited The thief, he kindly spoke There are many here among us Who feel that life is but a joke”

Album: ‘Animals‘ by Pink Floyd
Inspired by: Animal Farm by George Orwell
Popular Lyric: “With your head down in the pig bin, Saying ‘Keep on digging.’ Pig stain on your fat chin. What do you hope to find. When you’re down in the pig mine.”

Song: ‘Golden Slumbers‘ by The Beatles
Inspired by: The poem Cradle Song by Thomas Dekker from his play Patient Grissel
Popular Lyric: “Golden slumbers fill your eyes  Smiles awake you when you rise  Sleep pretty darling do not cry  And I will sing a lullabye”

Song: ‘All I Wanna Do‘ by Sheryl Crow
Inspired by: The poem Fun by Wyn Cooper
Popular Lyric:  “‘All I wanna do is have a little fun before I die,’  Says the man next to me out of nowhere  It’s apropos  Of nothing”

Album: ‘Ramble On‘ by Led Zeppelin
Inspired by: The Lord of the Rings by J.R.R. Tolkien
Popular Lyric: “Twas in the darkest depths of Mordor, I met a girl so fair. But Gollum, and the evil one crept up And slipped away with her.”

Song:‘White Rabbit‘ by Jefferson Airplane
Inspired by: Alice’s Adventures in Wonderland by Lewis Carroll
Popular Lyric: “And if you go chasing rabbits, and you know you’re going to fall/Tell ’em a hookah-smoking caterpillar has given you the call/And call Alice, when she was just small.”

Song:‘Brave New World‘ by Iron Maiden
Inspired by: Brave New World by Aldous Huxley
Popular Lyric:”Dragon kings dying queens, where is salvation now/Lost my life lost my dreams, rip the bones from my flesh/Silent screams laughing here, dying to tell you the truth/You are planned and you are damned in this brave new world.”

Song: ‘Rivendell‘ by Rush
Inspired by: The Lord of the Rings by J.R.R. Tolkien
Popular Lyric: “Elfin songs and endless nights/Sweet wine and soft relaxing lights/Time will never touch you/Here in this enchanted place.”

Song: ‘For Whom the Bell Tolls‘ by Metallica
Inspired by For Whom the Bell Tolls by Ernest Hemingway
Popular Lyric: “Take a look to the sky just before you die/It is the last time you will/Blackened roar massive roar fills the crumbling sky/Shattered goal fills his soul with a ruthless cry.”

Song: ‘The Ghost of Tom Joad’ by Bruce Springsteen
Inspired by The Grapes of Wrath by John Steinbeck
Popular Lyric: “The highway is alive tonight/But nobody’s kiddin’ nobody about where it goes/I’m sittin’ down here in the campfire light/Searchin’ for the ghost of Tom Joad.”

Song: ‘Tales of Brave Ulysses‘ by Cream
Inspired by: The Odyssey by Homer
Popular Lyric: “Her name is Aphrodite and she rides a crimson shell,/ And you know you cannot leave her for you touched the distant sands/With tales of brave Ulysses, how his naked ears were tortured/By the sirens sweetly singing.”

Song: ‘Blood and Thunder‘ by Mastodon
Inspired by: Moby-Dick by Herman Melville
Popular lyric: “This ivory leg is what propels me/Harpoons thrust in the sky/Aim directly for his crooked brow/And look him straight in the eye.”

And one inspired by authors everywhere:

Song: ‘Paperback Writer’ by The Beatles
Inspired by: Paperback writers everywhere
Popular Lyric: “Dear Sir or Madam, will you read my book?/ It took me years to write, will you take a look?/ It’s based on a novel by a man named Lear/ And I need a job/ So I wanna be a paperback writer.”

Have fun listening to the songs and happy writing!