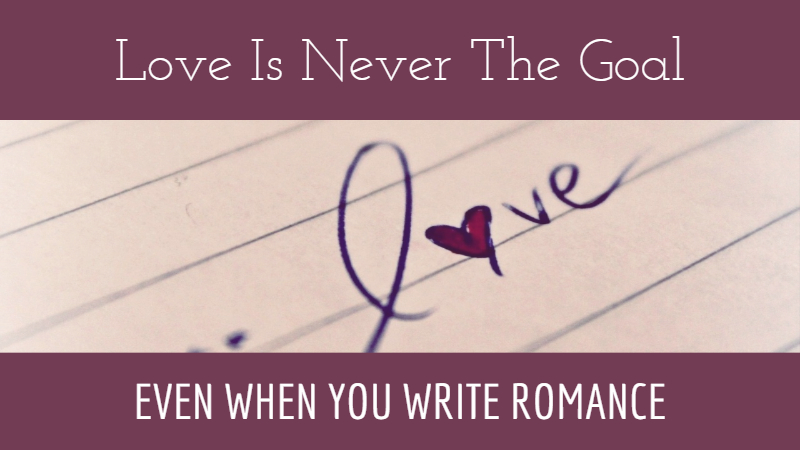 In this post, we discuss why love is never a good story goal – even when you’re writing a romance.

Story goals are at once incredibly simple and annoyingly tricky. It is easy to think that ‘finding love’ should be a story goal in romance, but it’ll be better if your story goal is more concrete than that.

In Historical Romance the plot often revolves around marriage and proposals and suitable candidates, but even then, the goal is ‘marriage’, not love. Love is the often unexpected reward.

Consider the five concrete story goals. The character needs to achieve one (or more) of these.

In Outlander by Diana Gabaldon, Claire time travels to the past and her immediate goal is to get home. Check out the longer description in the summary below. She finds love in the past with Jamie, but even when Jamie marries her, he does it to keep her safe from Randall. Love and attraction blossom because of their forced proximity.

The ‘mini-goals’ force her into a situation where she is first transported through time and then needs to find a way to return.

In How to Lose a Guy in Ten Days, Andy’s story goal is to write a magazine article, Ben’s is to win the account. Their ‘plans’ of achieving these goals are what forces them to spend time together and then they fall in love.

Concrete goals: Andy and Ben both need to get something physical (write the magazine article and win the account).

In The Lucky One by Nicholas Sparks, Logan’s goal is find out who the girl in the photo is. His plan, once he returns from Iraq, is to track her down, because he believes the photo was the lucky charm that kept him alive.

Concrete goal: Logan wants to resolve something physical (find out who the girl is).

As the story unfolds these goals can change.

In Outlander, love only enters into the equation much later. The goal can change. She falls in loves with Jamie and chooses to stay with him, but then the goal changes to avoiding Randall.

In The Lucky One, he finds her rather quickly, but he doesn’t return the photo or even tell her about it. He starts working with her instead, he learns whose photo it was and why it was important and then the two fall in love. His secrecy regarding the photo causes conflict in the story.

I think, as romance writers, we’re in love with love and then we tend to forget that a story needs a physical goal.

If you want to learn how to write a romance, sign up for our online course, This Kiss.