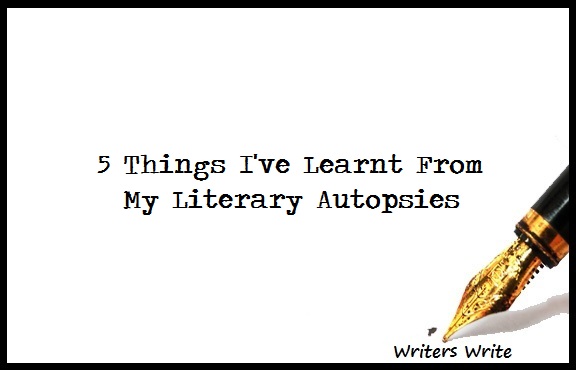 I have this secret. There is this folder on my computer. Actually it is a folder hidden in a folder, hidden inside another folder, but regardless of how far I try to hide it, I know it is there. It lurks, it smells. It rots in quiet resignation in the bowels of my hard drive.

No, it is not an illegal snuff film collection.

It contains the carcasses of my unfinished novels. Characters that died mid-sentence, settings that dissolved into nothingness, stories that fizzled out and plots that got me trapped.

So dramatic, isn’t it? Why don’t I delete it?

I keep this file of decaying words for a reason. I have learned so much from these novels. Even though I failed them they taught me something. I went through this folder again a while ago, looking for the reasons I never finished them.

These are the five things I learnt from my literary autopsies:

These are the points were I get stuck. Experience has taught me to allow myself some breathing room here. When this happens I step away and rewrite character biographies or revisit my synopsis.

Instead of giving up like I used to, I find a new route. I have noticed that my writing has changed a lot. I can’t say yet if that is good or bad, but I guess it will change again and again and again.

I used to have twelve problems to solve, now that I’m aware of the problems, there are fewer and fewer. And let’s face it – it’s easier to keep going when you only have to fix something instead of everything. These are only some of the things that I have learned. I notice new things every time I revisit the manuscripts.

Take a look at your older work and see what you can learn.