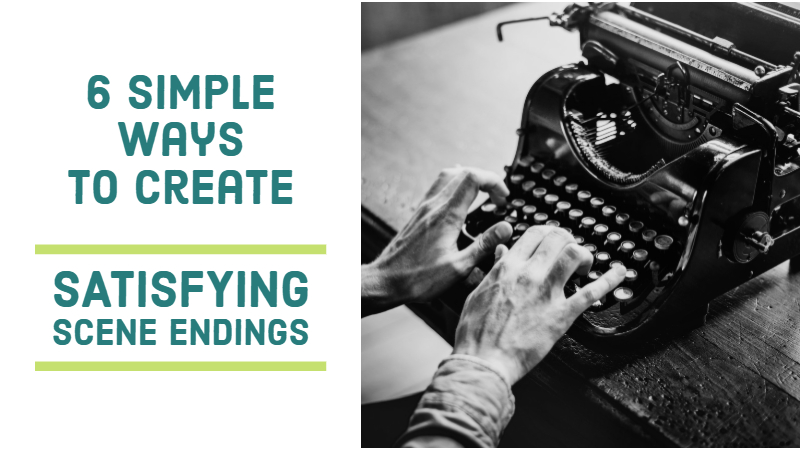 How do you create an ending to a scene or chapter that satisfies the reader and moves your story forward? This post is about six ways to create satisfying scene endings.

A great song plays on the radio. As soon as the last chorus fades, we wish we could hear it again. A plane touches down on the runway and we’re relieved that we’ve made a safe journey. We wave goodbye to a good friend. We wonder when we’ll see her again.

It’s all about anticipation

Every day we experience a lot of little endings and exciting new beginnings. And life throws bigger stuff at us once in a while. We’re at a beloved grandmother’s funeral. Our heartache tells us this’ll be the last goodbye. We get a promotion at work and wonder–What next?

The endings before the ending

In Writers Write, we show you how to craft scenes that make readers turn the page to get to the next scene or chapter. The truth is that these mini-endings are hard. They’re hard in real life and they’re hard to get down on the page.

So, just how do you create an ending to a scene or chapter that satisfies the reader and moves your story forward?

1. Start each hello with the last goodbye in mind.

If you write with your final climax in mind, you can use this to make every preceding scene more powerful.

For example, if you know your police officer catches the killer at the end, make sure you have scenes where he achieves other smaller goals to show his skill; also have some where he is defeated at the end of a chapter.

A mistake new writers make is to try to tell the whole novel in one scene. A scene should focus around one goal. Don’t tell us how Marilyn moved to a new town, met her neighbours, and started a new job. Start with Marilyn unpacking her kitchen stuff when she’s interrupted by a nosy, but friendly neighbour. In the next scene, you can have her fighting through the traffic to her new job.

Your character’s overarching story goal is big and ambitious. For example, he wants to catch a killer or she wants to get revenge on a cheating spouse.

Your scene goal should break that down into how they do that – it’s the itinerary of the journey.

So, first he needs to interview an alibi, and then track down a witness. Or she plans to catch the scoundrel on tape, hire a great private eye, ask a friend for help.

Create a few transitional paragraphs to summarise certain parts (usually the boring bits) or show a change in time, season, or attitudes . These can be used at the start of a new chapter to slow the pace or be added to the top of a new scene to give context.

In screenwriting, we have a rule for scenes–get in late and leave early. This is a great one to adapt to any writing. Don’t linger once you’ve achieved what you want from your scene.

Keep in mind that each scene creates an expectation in the reader. As a writer, we need to tease out that expectation – with fascinating characters, an intriguing plot development and dialogue that spark, so that the reader is vicariously satisfied and has enough story information at the end of the scene to enrich their enjoyment and solidify their investment in your story.

In other words, don’t bore them!

Establish conflict early, create obstacles that are plausible, show emotion, give the reader something they didn’t see coming – hit them with a cliff hanger or surprise, or give them a sense of false complacency by letting things run smoothly for a scene or two, and then get out as fast as you can so that they want more.

Top Tip: Use these templates to help you with scenes: Perfect Scene Templates To Help You Plot Your Book

If you want to learn how to write a book, sign up for our online course or join our course in Johannesburg.

If you enjoyed this post, you will love
Explore: Anthony Ehlers, Endings, Scene