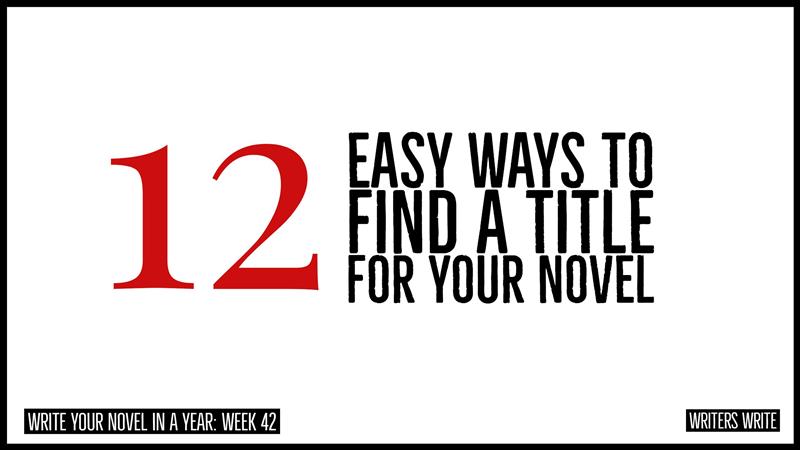 Write Your Novel In A Year – Week 42: 12 Easy Ways To Find A Title For Your Novel

Writers Write creates and shares resources for writers. This post will help you with 12 easy ways to find a title for your novel.

Welcome to week 42 of Anthony’s series that aims to help you write a novel in a year. Read last week’s post here. 12 Easy Ways To Find A Title For Your Novel

You could use your main character as the title of your book. A Man Called Ove by Fredrik Backman is a simple, but intriguing way to use this approach. Girl, Interrupted, a coming of age story by Susanna Keysen, is a good example. Note also how the comma in the title gives it an extra edge.

The Woman in Cabin 10 by Ruth Ware capitalises on the trend started by The Girl on the Train by Paula Hawkins. (But be wary of trends — by the time you latch on to them, they’re usually over.)

Alternatively, you could have a titillating phrase from your book as the title – like Now You See Her by James Patterson, or A Girl Walks Into a Bar by Paige Nick. Or it could be the blatant encapsulation of the plot, like Missing by James Patterson or Betrayed by Maria Barrett.

What is the catalyst or role your main character or antagonist plays in the story? Would this make a good title? The Trespasser by Tana French is a good example of this.

The 1980s drama/romance movie, The Idol Maker, also does this very well. To add an element of poignancy, consider The Last Tycoon by Fitzgerald.

Why not play with the classics, not just for your title but perhaps also your plot? Graeme Aitkin’s Vanity Fierce is a wonderful, modern update on Thackeray’s classic Vanity Fair.  Seth Grahame-Smith’s Jane Eyre & Zombies does something similar.

The use of colour in a title creates enormous visual and emotional resonance, if used correctly. Think of the crime-noir novel, Devil in a Blue Dress by Walter Mosley. Think of 50 Shades of Grey by EL James.

Understatement can be a great way to bring some irony into your title. In A Quiet Drink by Deborah Moggach, a simple drink at the bar has far-reaching consequences for a married couple. Similarly, in Eric Rohmer’s film, Claire’s Knee, a young girl’s knee becomes a metaphor for morality, sexuality, and other dangerous choices.

A phrase from another language is sometimes a great approach – as it adds in some exotic flavour. Saraband by Patrice Chaplin is a great example of this. Using the name of a slow, stately Spanish dance for the inexorable sexual obsession the heroine, Kay Craven, finds herself in is a perfect metaphor.

A snippet from a song or poem can work well as a title, especially if it relates your plot, character, or theme. For example, John Clare’s poem I Hid My Love has some great phrases that tie the sensation of summer to the sensation of love.

Ray Bradbury’s collection of short stories, I Sing The Body Electric, is taken from a poem by Walt Whitman. Just remember that the Bible and Shakespeare have been exploited to death.

Placing two contrasting words or images next to each other can create a powerful title. The Stone Boudoir, a memoir by Theresa Maggio, is a wonderful example of juxtaposing two opposite images or objects. A boudoir is meant to be soft and sensual, why is it made of stone? My favourite is probably Fabulous Nobodies by fashion journalist and novelist Lee Tulloch.

A run-on or rhyming title is a nice quirk to add to your book – especially if your book is a bit quirky. Me and Earl and the Dying Girl by Jesse Andrews is a perfect example of this approach. Divine Secrets of the Ya-Ya Sisterhood by Rebecca Wells also adds a bit of sass and rhythm to the title.

Sometimes a title has double meaning or hints at a double entendre. For example, if you called your book ‘Killing time’ — it could be about filling up idle time or, quite literally, a time to kill your enemies.

For example, the movie The Deep End, starring Tilda Swinton, is about a drowning victim – but also the emotional deep end the characters find themselves in.

I’m thinking of using the setting of the beach house in my novel as a title. A setting is a great way to ‘anchor’ your title. The Little Paris Bookshop by Nina George is a charming example of this approach. In a Dark, Dark Wood by Ruth Ware. Notice how the repetition in the last title works to great effect.

‘That’s a fair gloopy title. Who ever heard of a clockwork orange?’ — Anthony Burgess