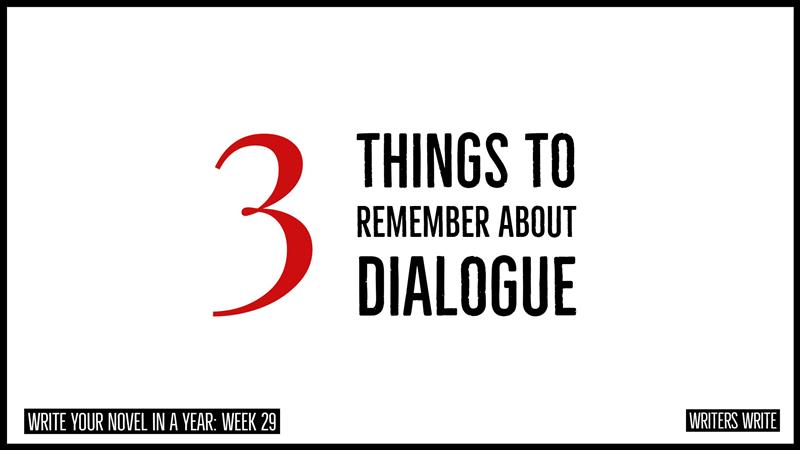 Writers Write creates writing resources. In this post, we suggest three things to remember about dialogue in your novels.

Welcome to week 29 of Anthony’s series that aims to help you write a novel in a year. Read last week’s post here.

1. Dialogue is about character

When characters speak, readers listen. In fact, they probably pay more attention to dialogue than narrative. It’s a way for them to get information about the characters in your novel.

The other day, a friend of mine made some off-hand comment about photographers. ‘Photographers are always seeing the deeper meaning – it’s never just a picture of a cup of coffee.’

This got me thinking about Jenna, my main character. She is a photographer. Obsessed with getting the perfect shot to tell the perfect story. How does this inform her dialogue? She can be quite critical – probing, incisive, intelligent.

Here’s another example. Finding speech patterns for my antagonist, Monty was a bit easier. He is a dreamer. So his dialogue is always about the future – about wish fulfilment. He very seldom tells the truth – he reinvents the past and the future is always ‘make believe’. Knowing this about him has really helped me with his dialogue.

2. Dialogue is about moving the story forward – or back

Readers are also looking to dialogue to give them information about the story or plot. They get to know  this through a character’s intentions and decisions – what are they going to do next in the story? That’s why stating these decisions in dialogue is a great idea – they register with the reader. For example: ‘We’ll go to the police first thing in the morning.’ ‘Let’s ask my father for help – he’ll know what to do.’ ‘We have to stop him before he takes this too far.’

Dialogue is a great way to avoid using long passages of back story. In my novel, it’s important to introduce some information about a holiday Matt and Jenna took in the past.

Instead of writing it as a flashback, I have the two lovers reminiscing about the holiday in dialogue. I also have other characters speak about this holiday in the story.

By using snippets of the information about the holiday in dialogue, I’m not forced to reveal the whole truth about what happened on the holiday – only through the memories of my characters.

3. Dialogues is about contrasting words with actions

The reader is also looking for the promises one character makes to another character – and to see if they keep those promises. Do we believe what the character is saying? Do we trust them?

In my novel, Matt, Jenna’s boyfriend, is always making promises that he never seems to keep.

This gives the reader a heightened awareness of the ‘fault lines’ in the relationship between Matt and Jenna. I want them to ask: Why does she believe these promises?  The contrast between a character’s actions and their words is very often what creates tension in a story.

One of the elements I love about writing my novel is finding the voices of my characters. I start to see them in my mind, the story becomes kinetic, and I’m able to move the story forward.

For more on dialogue, read:

Explore: Anthony Ehlers, Dialogue, Write Your Novel In A Year