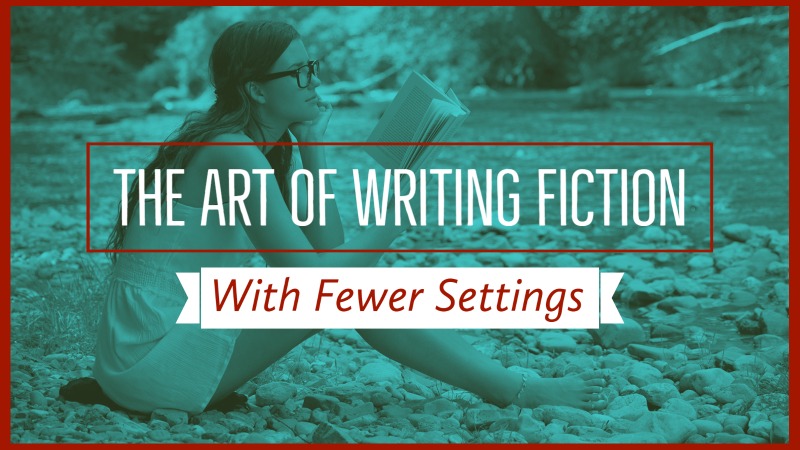 The Art Of Writing Fiction With Fewer Settings

In this post, we look at writing fiction with fewer settings.

Single location stories are a useful technique. Films like Saw and Cube are prime examples, while ‘Autopsy Room Four’ and ‘The Monkey’s Paw’ use it in writing.

Here’s how to write fiction with fewer settings.

Single locations can be rooms, motels, or houses. Sometimes, the set is an island, raft, or cliff. The story can include one character, or many.

While there can be short transitions, the story’s bulk is in one place.

Common themes include isolation, retrospection, introspection, confusion, or conversation. While some stories have characters trapped (such as the typical locked room tale), not all use this thread.

It’s fun: play around with it.

Where: The New York County Courthouse

12 Angry Men is set in a New York jury room.

The story uses conflict to build its plot. When twelve jurors are shut in, they all have to agree on an outcome.

In 12 Angry Men, a single room adds to its tension.

Writing Tip: What will people do in one room, faced with choices?

Where: The Dolphin Hotel in NYC

Much like The Overlook Hotel, the Dolphin is haunted. Room 1408 holds the worst.

Writing Tip: What would someone do to escape this single room?

‘Autopsy Room Four’ takes place in the titular setting, an autopsy room. While doctors perform an autopsy, the story is a window into awareness.

There is the isolation of an autopsy room, synonymous with coldness and death.

Writing Tip: What could happen in an autopsy room?

Where: A Train Station in Ebro Valley, Spain

‘Hills Like White Elephants’ is a typical Hemingway story, first published in the collection Men Without Women.

It is filled with symbolism. White elephant sales sell unwanted things, while a ‘white elephant’ is an unmentionable, obvious issue. One (of two) characters has an unwanted pregnancy, only apparent at the story’s end.

The story never moves from the train station in Ebro Valley.

Writing Tip: How could two strangers connect in conversation?

Where: A Man’s Home

Metamorphosis shows us salesman Greg Samsa, who has woken up as a house pest. The story is set in his own home, where his surroundings are familiar to him (but he’s recognizable to nobody).

It’s a novella in one home, about identity and the self.

Writing Tip: What if the setting was familiar, but the circumstance becomes surreal?

Where: A Family Home

‘The Monkey’s Paw’ is set in a family home, and first published in 1902. When a man gets a bewitched monkey’s paw, he wishes to pay his bond. The family is met with their son’s death – and inheritance.

While small setting changes exist, most of ‘The Monkey’s Paw’ is within a family home.

Writing Tip: What if a wish was a very bad idea?

7. The Landlady by Roald Dahl

Where: Bath, England
‘The Landlady’ is one of Dahl’s best, tense shorts. When Billy seeks an affordable stay, he finds the eponymous landlady in her home. The story unsettles from the start, and the tension grows.

Dahl uses the slow reveal, and often leaves the best line for last.

Writing Tip: What if you chose the wrong house?

8. The Lottery by Shirley Jackson

Where: An Unnamed Town

Jackson’s ‘The Lottery’ is set in a fictional, unnamed town. Once a year, the town selects a citizen through the lottery. Lottery winners don’t receive money, they are stoned by the town.

The actual town is never named, though Jackson would base it on her own experiences of narrow-minded small towns. ‘The Lottery’ provoked thousands of letters after publication.

Writing Tip: What damage can mob mentality do?

In this post, Writers Write explored writing fiction with fewer settings. We hope that you explore our other great writing resources!