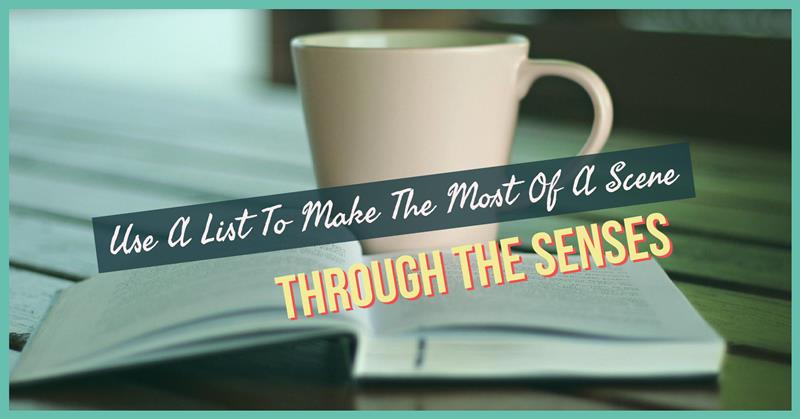 Writers Write creates writing resources and shares writing tips. In this post, we suggest how you can make the most of a scene through the senses, with a simple list.

Bringing in as many of the senses to a scene in a novel or story is a powerful way to lift your writing, to make it more vivid, authentic, alive.

Real people react to the senses at every moment of their lives: fictional people should too. Sometimes, as writers, we bring in the senses to a scene … then forget to thread them through the rest of the scene. And this could be a missed opportunity, isn’t it?

For example, in a romance novel, you could have two young lovers enjoying a picnic by the lake when they are caught in a spring storm. The rain takes them by surprise on the sunny afternoon. They run for the cover of an old abandoned gazebo on the edge of the park, where they make out passionately.

Make The Most Of A Scene Through The Senses

In this scene, you could use the senses in multiple ways. As a writer you could make a list of the opportunities to use the senses at different times throughout this scene before you even start writing the first line of the scene. Often the senses work better when they are filtered through the viewpoint of a single character.

In the beginning, you could describe the way heroine feels as she sees the sunlight diffuse and break up through the hard, bright rain. In the middle, the way the rain has become a glittering curtain around the gazebo – protecting her and her lover from the world.

At the end, after the storm passes, you could describe the way she sees the sun soften as it glows behind the clouds and how the sky has darkened and deepened in colour in the late afternoon. There is a sense that the world has changed and she is changing as her feelings for her lover grow deeper.

In the beginning, you could explore the way the cool hard drops of rain feels as they tease her face and arms. She feels the cool, firm fingers of her lover as he takes her hand and they run for shelter. In the middle, that same rain has become a damp heat on her excited skin. His fingers are no longer cool and loose – but hot and insistent.

At the end of the scene, the rain on their skin hasn’t dried but become a sheen – on her arms, on his slick, flushed handsome face. And, in the changing light we noted above, his eyes looked darker and more intense too. (In fact, you will find that seldom will the senses work in isolation.)

In the beginning of the scene, you can have the heroine breathe in the scent of rain on the grass, the lake – an earthy intoxication, heightening her awareness of her surroundings. In the middle, the wetness on his warm chest become another heady scent for her: a mixture of rain, skin, and a lingering hint of subtle clean soap. (Again, here we have the senses working together.)

At the end of the scene, you could have the heroine more aware of all her senses as she opens herself to more sensations. You could complement the scene with the smell of the wet wood of the gazebo, the sharp smell of pine needles, the sweet brackish smell of the lake. (Try to make your list as detailed as possible.)

At the beginning of the scene, you could have her hear the faint rumble of thunder, but you could go deeper – the hard drops of the rain on the gingham cloth covering the picnic basket and on the surface of a glass of half-finished lemonade.

In the middle, you could have the heroine hear her own heartbeat as the kiss becomes more intense – as well, as her lover’s breathing, his whispers above the rain.

In fact, at the end of the scene, when the rain has stopped, she could suddenly miss the sound of the rain: its rhythm has carried the scene forward. The few forlorn splashes from the filigree corners of the gazebo remind her that the passion has passed, the moment spent. Gone.

In the beginning, you could have the heroine sipping lemonade and watching the hero popping white grapes into his mouth. In the middle of the scene, you could have her taste the rain on his lips, and the lingering fruity sweetness of his mouth during the kiss. He could tell her that her mouth tastes just as sweet from the lemonade, which adds a lighter moment to the intensity of the scene.

At the end of the scene, while packing up the picnic basket, she could drink some more lemonade – but it has been diluted by the rain, and is warm, but she drinks it because she is thirsty.

Keep in mind, you don’t have to use all the sense-specific descriptions, but rather use them to enrich the scene where you think they will work best. Don’t forget you use the senses in other scene elements, like dialogue.

Top Tip: If you want to write a book, sign up for our online course.