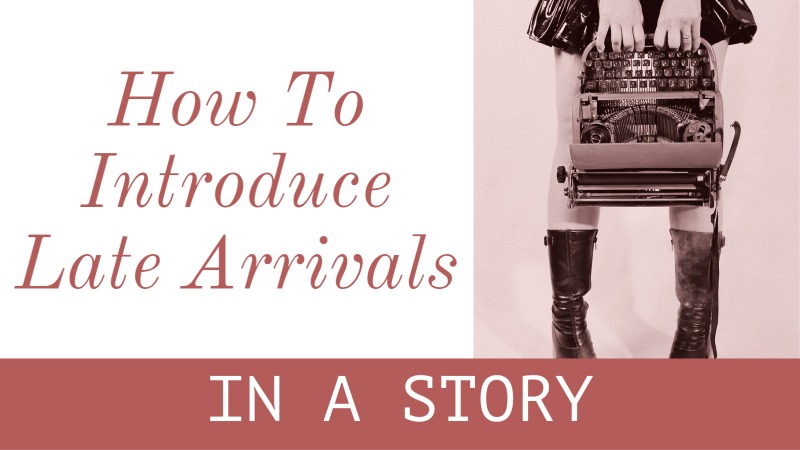 How To Introduce Late Arrivals In A Story

Are there some characters who show up in the middle of your book? This post is about how to introduce late arrivals in a story.

In a perfect world our drafts would be precisely plotted and our characters would appear on the page at the exact literary moment that they are required, but in real life, that rarely happens.

Even if we are meticulous plotters there is always a character who arrives half-way through, disrupts everything and insists on space on the page. I am not talking about the waitresses, taxi drivers, spouses, neighbours and shop assistants in the story (unless the story is about them).

I am talking about a bigger, unplanned character that can alter the course of the story. Should you keep them or should you boot them?

How Did That Happen?

Sometimes, beginner writers run out of plot. They add characters to make up the word count instead of going back to their scenes to brainstorm scenarios that will help their character achieve their story goal. Those are the filler characters you might have to boot.

You want a strong group of characters who propel the story forward. Not a bunch of people standing around as if they are at an awkward cocktail party with unidentifiable finger foods, inexplicable pseudo-art, and no seating.

How Do You Know If You Should Keep The Character?

Other times the character arrives and just makes themselves at home. I usually ask myself if the character can be replaced. Odd, yes, but it helps.

Carefully examine why you have that character in the scene.

If they are irreplaceable you should keep them.

Another test: will you be seeing this character again? If the character is only in one scene chances are you don’t need them. Rather find another way to achieve that goal if you can.

If your new arrival cannot be replaced and serves a function that is related to the story goal, keep them. Give them screen time and see what happens, but don’t let them hijack your story. (If they are hijacking your story, maybe you should be telling their story instead. Learn to differentiate between a better idea and shiny new idea that only seems easier because it’s new.)

How To Introduce Late Arrivals In A Story

Ask yourself how do they relate to the story goal and to the main character? Their presence should seem natural, as if you had planned it all along. Set the scene for the new character, in a second draft some foreshadowing might be needed. You can also use backstory or a casual mention earlier on can be added. If this is your first draft, don’t go back yet. Just make a note.

2. Arrive With A Bang

Make their introductions memorable. Their function will dictate their actions in the scene, but a good introductory line will cement their presence. One of my favourite descriptions is about a character named Charlotte Belle, it reads, ‘She liked her whiskey straight up and her men gone in the morning.’ It tells me, in two lines, what I need to know about the character to proceed with the story. Do I learn more as we go? Yes, but it sure makes for a good start.

Sometimes we are obsessed with the physical appearance of a character, but we can give the reader more insight with descriptions that aren’t only physical. This goes for all characters, but it happens to me especially if it is unplanned. I love this quote by Pat Schneider: ‘If I tell you my character has grey hair, you will not see her. If I tell you she has a tiny scar at the upper left corner of her lip from which protrudes one grey whisker—you will make up the rest of her face with absolute clarity. If I tell you my character is waiting in a car, you won’t be ‘caught,’ but if I tell you he pushes his fingers down in the crack of the car seat where the ancient leather has pulled away from the seat frame, and pulls up a small coin purse with a faded note in it—you will be mine.’ [Suggested resource: 350 Character Traits – A Fabulous Resource For Writers]

When we start planning our novels we pay attention to the characters, but sometimes when new characters arrive we tend to neglect them a little bit. Think about these points when you have new arrivals in a story.