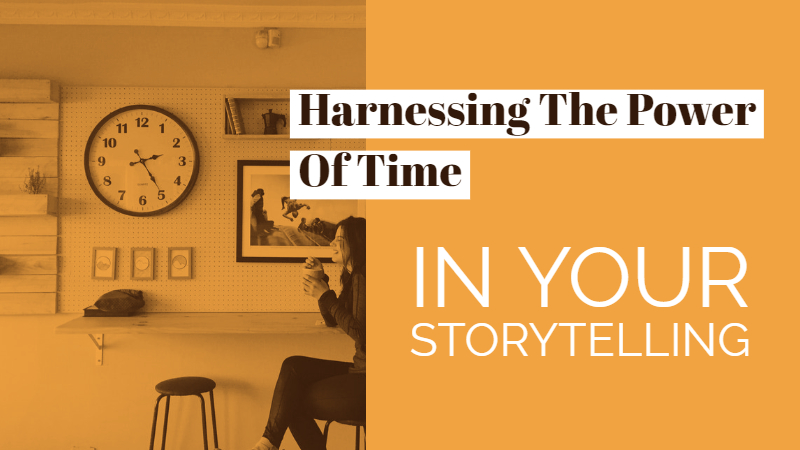 Time is important in stories. The way it passes, the effects it has are all important. In this post we discuss harnessing the power of time in your storytelling.

About a month ago, riding the train home from work, I looked up and through the window, the sky was low and turning to a dirty purple twilight.

Just before the train and all her tired and distracted passengers started the final narrow stretch to our station, past the smoke stacks of the coal power station and the factory that makes disposable baby nappies, for a few moments I watched thousands of tiny lights that were already on across the suburb below us, forming a shiny cheap-jewellery crust over an area of town houses, the malls, office parks.

It is still winter and where the lights stop, the grass starts and ripples towards the train window: dry, stripped of colour, patches burned black by veld fires.

What does time mean to you?

In those moments, just minutes really, shaken gently from side to side in my seat, between dusk and the lights, as the train rushed breathlessly through the last of the day, I was conscious of time—not as anything artificial and clear as the white digits on the face of an iPhone, but as something moving us all along, me along. Something moving within me, inside of me, even as it moved outside of me.

Time on its own tracks.

That night, coming home from work, time didn’t hold its usual terror for me.  I was content to just be carried along, too exhausted to fight. In many ways, those moments on the train helped me grasp the ‘ungraspable’ nature of time itself: that time is ‘now’, that it is behind us, in front of us, everywhere.  It’s just you moving, being moved, threaded invisibly through time.

It is hard to get your head around ‘time with a capital T’, from the fact that vast millennia existed before us to the idea that it will exist for millennia after us.

Time that reminds us of our mortality in the mirror each morning. Time in yesterday’s newspaper—a tsunami here, a political storm there. Time in history books about Alexander the Great, Napoleon, the kings of England and Scotland. Time in photographs from our childhood, found in suitcases and cupboards, that make us smile and cry.  Time in the short stories that we wrote last year and the year before, and the year before.

We feel like we’ve been writing forever and, so, words are time too. Word after word, sentence after paragraph, stitched, threaded, held imperfectly together. The dangerous romance of time

Time like a metaphor, time like a mist: rolling back and towards us. And right there in that last sentence lies some of the poetic danger of time for all of us, yes, but especially as writers. We tend to attach a romance to time that it doesn’t have. Time is indifferent, abstract, anonymous. It simply doesn’t care, it can’t care.

A watch or a clock may have a face; time does not.

Marshall Barnes, a conceptual theorist, says that time is neither linear nor cyclical. Time doesn’t flow or move but allows other things to do so.  If you think about it from that viewpoint, we don’t have a separate or static past, but we have moved through time. Time hasn’t happened to us.  It is not an agent that can act upon us.

There is no ‘humanness’ to time, no emotion. Only our memory of it, which is human, shades it with emotion. From one of my favourite Counting Crows songs, Mrs Potter’s Lullaby: ‘If dreams are like movies, then memories are films about ghosts.’ Indeed. Those words slice into the soft tissue of the soul like a thorn under the nail of your thumb.

Memories. Old carousels of scents and emotions, glowing dim with nostalgia. Other times a memory comes back to you with blood-stopping supraclarity—a brutal shard. As Tennessee Williams says, ‘Life is all memory, except for the one present moment that goes by so quickly you hardly catch it going.’

For me, what I rub up against, what I’m incompatible with, is not so much time but age, chronological and biological age. As we grow older, we experience time differently. Memory, the way we store, remember and recall information, changes. It is emotional, subjective, fallible.

That is fascinating. And the way we explore time in life and in writing is truly fascinating.

For example, Moncrieff first translated Marcel Proust’s masterpiece as Remembrance of Things Past, while Enright’s later translation mirrored the French title a bit closer, In Search of Lost Time. The first creates that soft-focus romanticism I spoke of earlier, while the other is closer to what the writer was perhaps aiming for — an examination of the nature of memory, a sense of uncovering and exploring rather than just an attempt to ‘recall’ past events.  To me, this illustrates the nuances of time in a story world. As a writer, I’ve become obsessed with time and the way we can use time in storytelling.

‘The novel is time’s child. The novelist can never do otherwise than work with time, and nothing in his novel can escape it,’ writes Eudora Welty in her fascinating essay on the subject, Some Notes On Time In Fiction. It’s one of the most interesting discussions on time and place, and the subjectivity of time in fiction.

My temptation is to repeat it here, to dissect and analyse it.  But while I can in no way compare to her genius, I do want to offer some insights into the way you can “work with time” in your novel or story.

While books or stories are absorbed line by line, page by page, cover to cover, the story you bring to the reader’s imagination does not have to be linear or straightforward.  As a writer, this is exciting. You can play with or manipulate the experience of time for the readers or the characters in your story (or both).

As Welty writes: ‘The events in our lives happen in a sequence of time, but in  their significance to ourselves they find their own order, a timetable not necessarily — perhaps not possibly—chronological. The time as we know it subjectively is of the chronology that stories and novels follow: the continuous thread of revelation.’

How perfect is that? Revelation as in truth, surprise, the bottom lining of the human heart.  As we read, as we follow the stories, we want to get through to that moment of truth, for it to be illuminated and revealed to us. We ache for it. How can we use time in story?

One way to use time is to create a braid or plait that intertwines past and present, as Patrick Gale does in his rich and evocative novel, Rough Music. The story takes place alternatively between Cornwall in the 60s and the early 2000s, and explores the same character in childhood and adulthood in the same setting at different times.  The author also shifts the identity of the character, calling him Julian in the childhood chapters and Will in the present-day chapters.

There is also a great short story, the name of which escapes me, that takes place at different times. In this case, the time jump is much shorter and covers a day or less – but time is critical to the revelation of the story.

In alternate scenes, we meet two women with different names – one is a cop investigating a possible case of assisted suicide or murder. The other, the woman who has helped her mother end her suffering. In the final lines, we realise that the two women are actually the same character.

In this way, you can add ‘time’ to other tools in your possession (like misdirection, shifting identity, viewpoint and so forth) to construct a great revelation or surprise. James Patterson does this to great effect in his novel Honeymoon.

The absence of time is also potent method to use in storytelling.  In her hard-hitting novel, The Judas Lovers, Patrice Chaplin ‘breaks’ time at critical points in the novel. For example, the lead character, Kate, runs off with a married doctor to the seaside. But, as readers we’re not shown any of the scenes of their time away.

Only later, when Kate has a mental breakdown and is in a clinic, does she recall the seaside scenes with her lover. In this way, the author creates a powerful juxtaposition in the narrative. Through manipulating time and sequence, she puts the worst time in the main character’s life side by side with the happiest time in her life. The contrast create strong emotions in the reader.

So, in effect, how you structure and arrange your scenes can help you manipulate story time to help deliver the emotional impact you want the reader to feel.  Study the novels or stories that achieve this affect to uncover the hidden architecture of the story.

In her song, In Liverpool, Suzanne Vega sings about a boy ‘ringing the bells in the church’ – it’s a clever way to bring the element of time into the lyric, as the church bells signify time and here she relates them to the theme of obsession and longing.  A haunting line demonstrates this: ‘Homesick for a clock that told the same time.’

I use this example to show that you don’t have to be explicit or ‘on the nose’ when you bring time into your story—you can introduce it as a subtle theme or gentle symbolism.

As writers, we should always be aware of how other artists in other mediums use time in their worlds—pay attention to the song on the radio, the canvas on the wall, the movie you watched last Saturday. Past, present, and future

The science fiction or fantasy movie may accelerate or anticipate ‘future time’ and create a world that is still to come—either as a dark and dystopian warning or as light and idealistic Arcadia.  The writer may even explore the idea of time travel – about threading into the past or throwing forward to a future time and place.  You can see that the possibilities are endless when it comes to time.

I’m reminded of the last lines of Fitzgerald’s The Great Gatsby: “So we beat on, boats against the current, borne back ceaselessly into the past.”

Whether you’re exploring a stream-of-consciousness ‘now’, sailing into the brightly blinding unknowable future or tossed back into the past—which boat is your character on? Where is time in your novel?