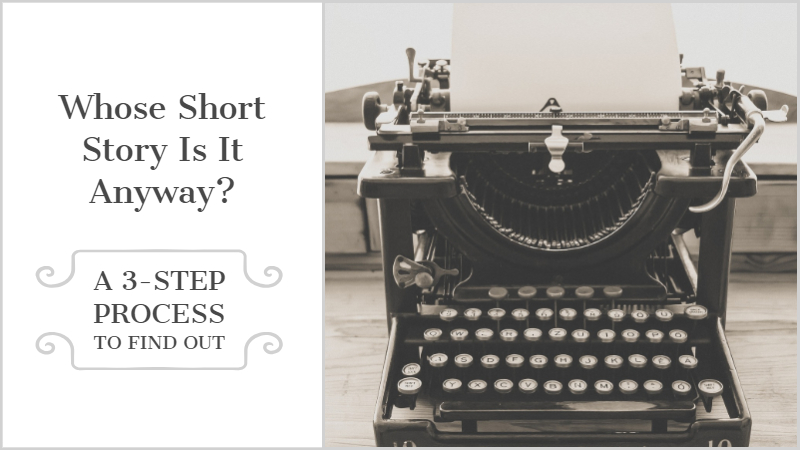 Writers Write is your one-stop writing resource. In this post, we discuss how to tell whose short story you’re telling.

Who is the star of your short story?

In previous posts, we discussed the inciting moment and the resulting goal. This week I want to talk about the character and the conflict that arises during the character’s attempt to achieve that goal. Who your character is will dictate a lot of this, so it is important to know your character.

A short story is usually about one person, the protagonist, and usually involves one event. Note the word, usually. The longer the story, the more room you will have for maybe one or two more characters, but you should focus on the protagonist. Even if they are in a crowded room, it is one person’s story or version of events. I’ll talk about viewpoint at a later stage. Right now, I want you to focus on the hero of your story.

Whose Short Story Is It Anyway? A 3-Step Process To Finding Out

Start with the past and work your way up to the present, or vice versa. Who we were, influences who we are and ultimately, who we are going to be.

Past: How we react to situations depends a lot on how we were raised. Backstory is a great way to delve into character. How did your character grow up? What were their parents like? How does that childhood affect their reaction to the inciting moment and the goal they choose? Remember, back story is for the writer, not for the reader.

I once came across this image on Facebook, of course I can’t find it anywhere now, and if you have this image please share it with me. It is a picture of two little men, each with their own caption:

Same house, same dad, different outcome. This is, of course over simplified, but shows us that no two people are alike, even if they were subjected to the same experiences.

Present: The character’s reaction also depends on their current circumstances, for example: A positive pregnancy test for a woman who wants a baby is the best news ever, for a teenager, not so much. Assess where your character is in their life and how the inciting moment will disrupt or improve it.

When you start writing you will know some of these things immediately, other details you will discover as you write. Your character must be able to act or react to the inciting moment, or their inability or refusal to act could be the premise of your story. The important part is that the inciting moment forces the character to react and pursue a goal. This goal takes them on a journey that causes emotional and physical change. The time frame of the story will also influence this, but we will talk about that in a later post.

Write a short biography to help you. You won’t necessarily use this in your story, but it will help to create a rounded character.

In the next few posts we will discuss the opposition and the resulting conflict.

P.S. If you want to learn how to write a short story, sign up for our online course.