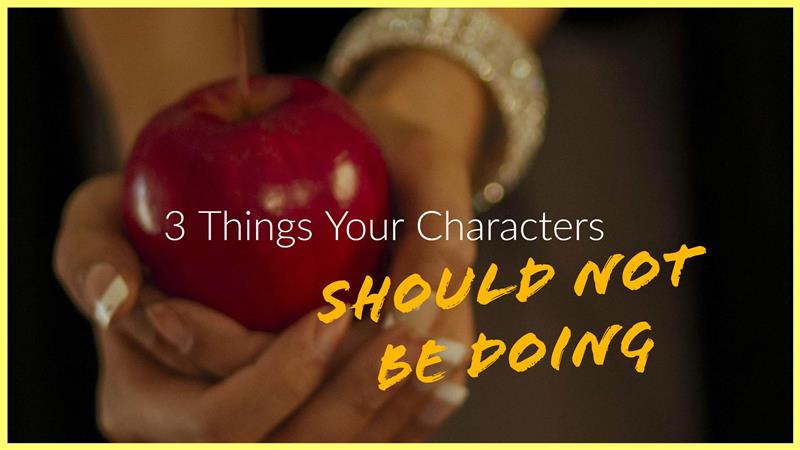 If you are writing a novel, we have put together a list of 3 things your characters should not be doing in your book.

There are many things a character needs to do in a story, and many more that authors need to exclude.

‘Drama is life with the dull parts left out.’ ~Alfred Hitchcock

We all have pet hates when we read. They can be big mistakes, such as when you’re introduced to 20 unnecessary characters in Chapter One, or when an author takes three pages to describe a cake, or when you have to read pages of boring backstory.

There are also smaller mistakes authors make when writing fiction. The reasons for these mistakes can relate to the lack of a story goal, a weak plot, or the incorrect choice of characters.

They also relate to poor creative writing skills where authors treat characters as if they are real-life people. They let these fictional characters do things they should not be doing.

3 Things Your Characters Should Not Be Doing

Here are three problem areas for characters that make me want to stop reading a book:

Although we encourage writers to include lots of dialogue in their books, adding small talk for no reason is a bad idea.

If your character is going to talk about the weather or somebody’s health, it should be for one of three reasons. Include small talk only if it:

If you want action without meaning you should be watching reality television shows. A good writer keeps characters busy with things that will have an impact on the story.

Of course your characters’ lives are filled with unimportant moments, but we don’t need to read about every one of them.

‘The mistake I see most often is starting with pages of expository ‘background’. It’s much better to get characters on stage, doing something, as soon as possible.’ ~Nancy Kress, author of Dynamic Characters

If you have a character with a defined story goal, you should not have a problem with this.

Tip: Including characters who are distracted by their phones works better in film than in print. Restless characters make readers uncomfortable.

You can include distracted behaviour with body language and habits, but not to the extent that it interferes with the story’s flow. Readers want to read about characters that act and react, not characters who get distracted.

There are many more annoying things that turn readers off a story. Share some of yours in the comments section.

Top Tip: Use our Character Creation Kit to help you create great characters for your stories.